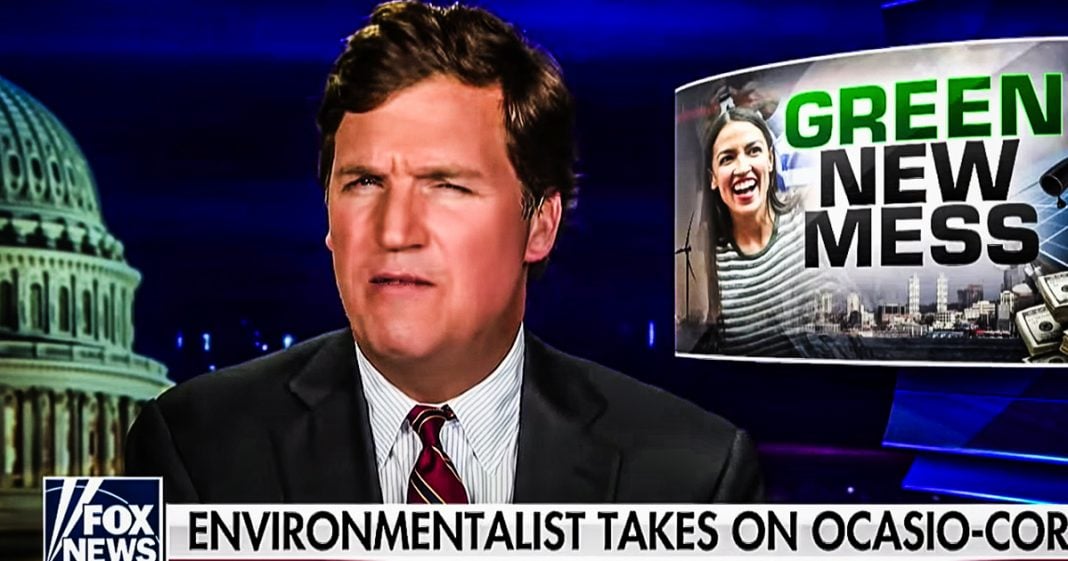 A new study published in the journal Nature has found that, prior to all of Fox News’ negative coverage of The Green New Deal, the idea actually had broad, bipartisan support in both Chambers of Congress. But once Fox News decided that they didn’t like it and ran negative story after negative story, the support for the plan dropped significantly among Republicans in Congress. Ring of Fire’s Farron Cousins explains what happened and how we fight back against it.

*This transcript was generated by a third-party transcription software company, so please excuse any typos.
Earlier this week a new study was published in the journal Nature that basically linked a decline in support for the green new deal to Fox news propaganda. And here is what this new study found. They looked at polls before the green new deal was really a thing. You know when it was in its infancy and people were talking about green, new deal, but not necessarily specifics versus four months later after Fox news got their claws into it started spreading misinformation like it was going to eliminate airplanes, steaks and all kinds of other things that it’s not actually going to eliminate. And what they found was that there was a double digit drop in support for the green new deal among Republicans after the Fox news disinformation campaign. Prior to that, the numbers are astounding. 81% of voters supported it, including 92% of Democrats in 64% of Republicans. But four months later after Fox news kept lying about it, which they covered it more than any other cable news outlet. Thanks MSNBC. NBC and CNN, 25% drop in support. So suddenly a majority of Republicans didn’t support it anymore. And you know what happened at that point, even though it had enjoyed bipartisan support in Congress, Republicans in the Senate suddenly saw Republicans in the country not overwhelmingly supported, and they help to kill it because Fox news convinced these people to not like it. And these people convinced their senators and members of Congress, we don’t like it, so you shouldn’t like it. So we’ll vote against it. You can thank Fox news for that, but to be honest, really you gotta thank MSNBC and CNN too, right? Fox news talked about the green new deal according to this study, more than MSNBC and CNN. Of course, everything Fox news said about it as the report points out was a lie, but they were still talking about it. And yeah, Fox news has more viewers than MSNBC and CNN. In fact, depending on the hour of the day, they have more than both those networks combined. But to claim that MSNBC or CNN or liberal media is absolute garbage. They’re corporate is media. So of course they’re not going to cover a good thing like the green new deal. Why? Because it’s going to hurt their advertisers. You know, you get to turn on MSNBC or CNN right now for 10 minutes. What are you going to see? You’re going to see a couple of commercial breaks in that 10 minute span. You’re going to see something from either Exxon or BP or Chevron or any one of those oil companies that’s going to be impacted by a green new deal. And what are those ads going to tell you? They’re going to tell you that this oil company, Hey, we’re working hard. We’re, we’re harvesting for fuel. Oh, we’re working on carbon capture technology. No, they’re not. No, they’re not. They could have been doing that at any time in the last 20 years. They should have been doing it at anytime in the last 20 years. So now suddenly we’re supposed to believe they’re taking it seriously when they continue to fund these groups that deny climate change exists. Nope, don’t buy it. Don’t believe it. This is a greenwashing campaign from those organizations that the corporate media outlets are more than happy to air. That’s just as bad as the propaganda coming out of Fox news and Fox news as this study points out is partially responsible for the death of the green new deal in Congress. Certainly for the decline in public support, but they also said the Fox effect, which is what they call it, little bit of a misnomer, right? It’s almost just a placeholder because it’s not just Fox news. It’s misinformation coming from Republican politicians, misinformation coming from the industry, coming from the think tanks coming from other right wing media outlets. There is no nothing like that on the left. We don’t have that. We don’t have millionaires and billionaires funneling money through think tanks and these foundations that then gets funneled into left wing talkers the way it does Right wing talkers. That simply doesn’t exist for us. Each and every one of us is on our own. Some are doing great. Some are struggling to get by, but you don’t see that crap on the right. They’re all unified in their messaging. They’re all somehow getting funded by these organizations funded by billionaires, and they’re all just want to be little Fox news or is out there spreading misinformation. And that is also part of the Fox effect as this new study points out.