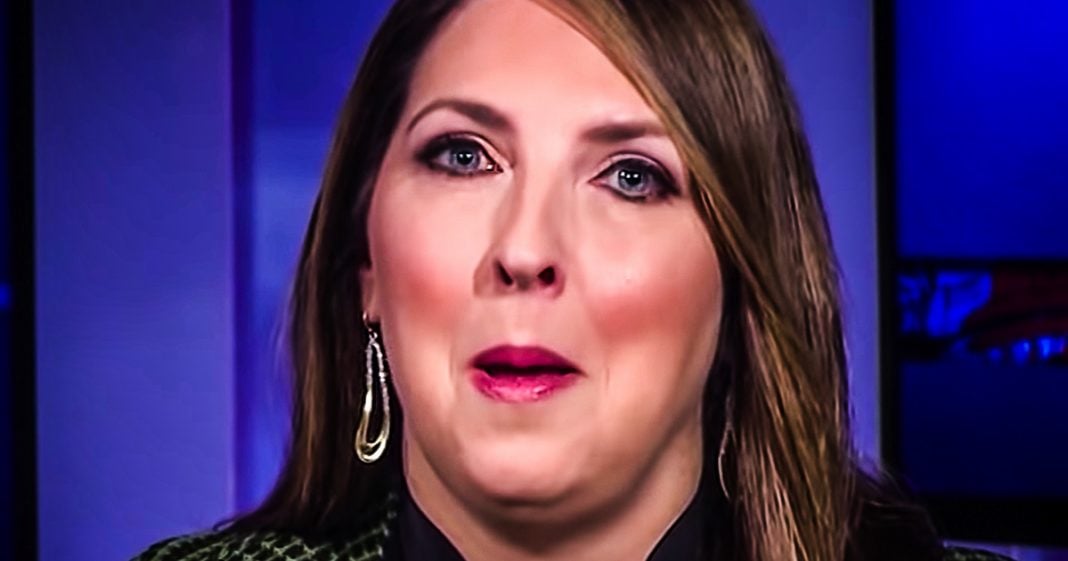 According to new documents, it appears that the Republican National Committee asked for half a million dollars from Doug Manchester, a billionaire Republican donor who was nominated for an ambassadorship to the Bahamas, at a time when his nomination had stalled. After he sent along a check for a smaller amount, and his ambassadorship was never approved. Ring of Fire’s Farron Cousins explains what happened.

*This transcript was generated by a third-party transcription software company, so please excuse any typos.
A shocking new report came out earlier this week by CBS news that says that there was likely a little bit of bribery and possibly some pay to play between Republican national committee chairwoman, Ronna McDaniel and a man by the name of Doug Manchester. Now who is Doug Manchester. Most people would ask, won’t Doug Manchester at one point was Donald Trump’s nominee to be the ambassador to The Bahamas. That’s a pretty sweet gig, right? You just travel from the U S to The Bahamas, you hang out, you have some of those wonderful little fruity drinks with all the fruit around the edges. That is a good deal. Mr Manchester also happens to be a very high rolling Republican donor and that’s actually why he got the nomination to be the ambassador. Well, while he was being considered for this position, his nomination stalled a bit. And so according to the documents, the emails obtained by CBS news, uh, you had Ronna McDaniel, Ronna Romney McDaniel. By the way, chairwoman of the Republican national committee sent an email to mr Manchester and said, Hey Doug, we need some money here for some Republican candidates. How about you send us half a million dollars to which Doug Manchester replied, yeah, look, I’m up for this ambassadorship. Um, and I don’t think it’s really a good idea for me to be sending you money while I’m sitting here. That’s probably going to look really bad, right? Um, but I’ll go ahead and have my wife send you a check and maybe according to the emails, Doug Manchester says, maybe you can, you know, get things moving on my ambassadorship in the Senate, right? Ultimately, Manchester was not approved and maybe it’s because his wife who cut the check didn’t send the half million that Ronna Romney McDaniel asked for. She only sent 100,000. We’ll do, they asked you for 500,000 and you sent one fifth of that, of course, are not going to confirm you after that. They were trying to get all the money out of you and you didn’t give them enough. So of course your nomination failed and now you’re just back to being an ultra wealthy Republican businessman. Now after these emails were revealed, mr Manchester said, I don’t see anything in there that looks like bribery or pay to play. Y’all are reading into that. Really she asked you for money. You said you shouldn’t because it would look like a pay to play, but you’re going to do it anyway and Oh by the way, get my ambassadorship nomination passed. You literally spelled out the pay to play before saying this is probably a pay to play in the emails that we now have. You can’t deny this and neither can Ronna Romney McDaniel. This woman is corrupt to her core, but so is the entirety of the Republican party. So it’s only fitting that you have somebody like ms McDaniels sitting up there at the top telling this guy to give them some money and then when she only gets a fifth of what she asked for, not following through with what he needed her to do, he didn’t uphold his part. Why should she have pulled her apart? This is pay to play and guess what Republicans, no, you don’t have to specifically say this is going to be a pay to play. Just like with Trump, you don’t have to say it is a quid pro quo just because you don’t say the words doesn’t make it so, and that’s what we have here. Ronna Romney McDaniel should not only be investigated, she should be immediately resigning as head of the Republican party, but she’s not going to do that. Even though potentially being under investigation for attempted bribery or extortion or pay to play probably isn’t going to be very good for the Republicans with a contentious 2020 election right around the corner.