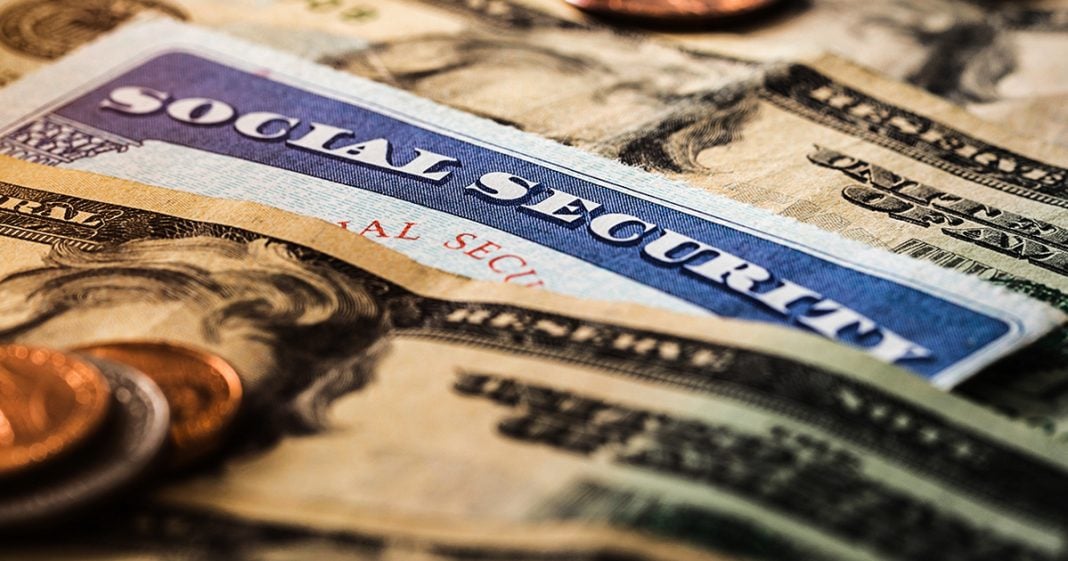 One of the most consequential aspects of the 2020 elections is that Republicans have been gunning for social safety net programs like Medicare, Social Security, and Medicaid for years, and if Democrats lose next year, those programs are going to become unrecognizable. As the budge deficit spirals out of control, Republicans continue talking about slashing our safety net programs to give rich people a larger tax break, and that will become a reality if Democrats don’t pull out substantial victories in 2020. Ring of Fire’s Farron Cousins explains what’s at stake.

*This transcript was generated by a third-party transcription software company, so please excuse any typos.
You know, I had a scary thought recently. Uh, we know that the deficit has now crossed $1 trillion and the biggest reason it crossed that trillion dollars is because of the Republican tax cut. We also know that ever since Donald Trump came into office, Republicans have been salivating over the thought of cutting social safety net programs. That was Paul Ryan’s biggest thing. The big thing he wanted to do for the two years he was in office before he decided to retire because he didn’t like working with Donald Trump. So he never got to see that become a reality. But Republicans right now are already whispering amongst themselves and we have seen reports of this, that they’re still coming for our social safety net programs, social security, Medicaid, Medicare, heck school lunches. We have seen them already cut funding for the special Olympics. They’re cutting that. Not necessarily as those are safety net programs per se, but we’ve already see them come after disadvantaged people and those are small potatoes. Those are, those are the little things they can get away with doing that most people don’t pay attention to. They still have huge impacts for disadvantaged people, but they want to cut Medicare, they want to cut social security and they want to cut Medicaid. They’ve already made some cuts to them, but not nearly as much as they want to. And if Democrats don’t pull out some major victories in 2020 then those cuts are coming. And that was the horrifying realization I had recently. Republicans will destroy our safety net programs, programs we have paid into our entire working lives. If the Democrats don’t retain the house and take the presidency in 2020 and the reason I say take the presidency to not just retain the house is because, yeah, the house gets the pass the budget but we don’t have enough Progressive’s in there to stop the corporate Democrats from going along with, Oh, maybe just a few cuts here. Ah, maybe just a few cuts there because if I cut this for you, maybe mr Republican who never goes back on your word, maybe you’ll vote for this. A gun control bill I put forward. Oh, you won’t do that. Okay, cool. I’ll still give you the cuts you wanted though, because that’s how Democrats negotiate. This is a very real, very consequential election. It’s not just about beating Donald Trump. It’s about protecting millions of people who could lose their lives and livelihoods. If Democrats don’t pull off some big victories in 2020 and some of those big victories aren’t even going to be victories against Republicans. It’s going to be victories in the primaries. We’re progressive challengers need to beat out these establishment corporate Democrats because those people are just as dangerous, if not more so than Republicans because Republicans are clear about what they want to do. They want us all to suffer because they want to give corporations and rich people more money. They make no qualms about that. They tell us that. Democrats tell us they don’t want that to happen, but then behind closed doors they vote to make it happen and that’s why I think they are more dangerous. These corporate centrist Democrats. We have some absolutely phenomenal and amazing democratic primary challengers out there right now taking on some of the biggest corporate Democrats out there in both the house and the Senate. Yeah. If they can pull off these primary victories, our LA AOC in 2016 we could see some real change. We could see more superstars emerge and we can protect these safety net programs. And if we get somebody in the white house whose last name is Sanders, then not only can we protect the safety nets, but we could extend them to every single person in this country. We can grow social security to where our grandparents aren’t only living off $1,100 a month. We can do better, but we can’t do better if we don’t win. And that is the most important part of 2020 yeah, it’s going to be great beating Donald Trump. We’re going to have that little bit of sense of tribal pride, but the real goal is to not let the Republicans screw people over and send them to an early grave because they want to kill our social safety net programs.