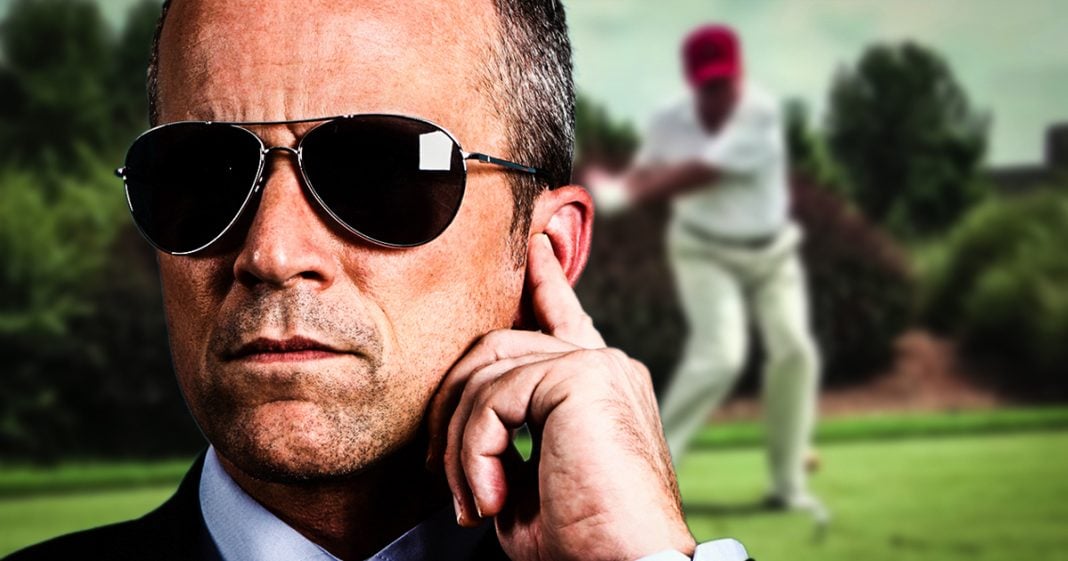 According to recently-released financial records, the Secret Service was forced to spend $50,000 per month at Trump’s own properties during a 5-month span in 2017. Considering the fact that his trips to his own resorts has barely changed since then, it is fairly safe to assume that tens of thousands of dollars are being funneled back into the President’s pockets each month. Ring of Fire’s Farron Cousins explains what’s happening.

*This transcript was generated by a third-party transcription software company, so please excuse any typos.
According to documents released this week by the property of the people organization that they obtained from the secret service via a freedom of information act request. The secret service over a span of less than five months spent more than $250,000 at Donald Trump’s golf resorts. Now, the time frame in question that this group got the documents for was from January 27th through June 9th of 2017 so this is basically started seven days after Donald Trump got sworn in as president of the United States and extended again less than five months to June 9th a grand total of $254,020 and 94 cents that the secret service paid in the first four and a half months of Donald Trump’s presidency to his golf resorts. That is an average of more than $50,000 per month. And this is also a massive emoluments clause violation. Donald Trump is enriching himself while serving as president of the United States. There is no question about that. He still owns his businesses. He may not be running the day to day operations, but ultimately the profits of those businesses go back into his pockets. And if he ever did feel like taking some of his money out, he’s allowed to do that. So, he could have the secret service go there, spend all this money, then immediately turn around and withdraw more money from his bank account or from his business. That is an emoluments clause violation. And to me, probably one of the most egregious legal violations that this administration has carried out. And here’s the worst part, two folks, we don’t know the real number. I mean we know the number now from the secret service for these first five months. What about all the months after that? Right? What about the 30 or so months after that happened? Was he still spending 50,000 a month? Was it more, was it less? What was it? Because we know that the president has spent well over 100 days of his administration at one of his own properties, so they’re spending more money than we know about. The question is how much, and I know Republicans, Charlie Kirk especially, loves to point this out. Donald Trump’s donating his entire presidential salary, $400,000 a year. He’s donating it. What a swell guy Charlie Kirk tells us, Charlie, Charlie, Charlie, Charlie button, dudes making tens of thousands of dollars a month in our tax dollars by hanging out at his own places. He’s making more than $400,000 a year off the presidency. He’s donating the salary so that he can hoodwink morons like Charlie Kirk, who’d only focus on that and not on all the money he’s bringing in because they’re too simple minded to be able to comprehend two things at once. And that’s Charlie Kirk for you, ladies and gentlemen. But what’s happening here is very serious. It’s very troubling. And Donald Trump should be forced to 100% completely immediately and irrevocably sell off all of the interest he has in his business. If after he leaves office, he chooses to buy back into his own business from his sons, he can do that. But as of right now, Donald Trump has to, needs to be forced to sell off every interest he has in anything with the Trump name on it. That’s what past presidents have been forced to do, and I see no reason why Donald Trump, who’s getting close to 50 grand a month from the federal government, spending time at his own resorts shouldn’t have to do the same thing.