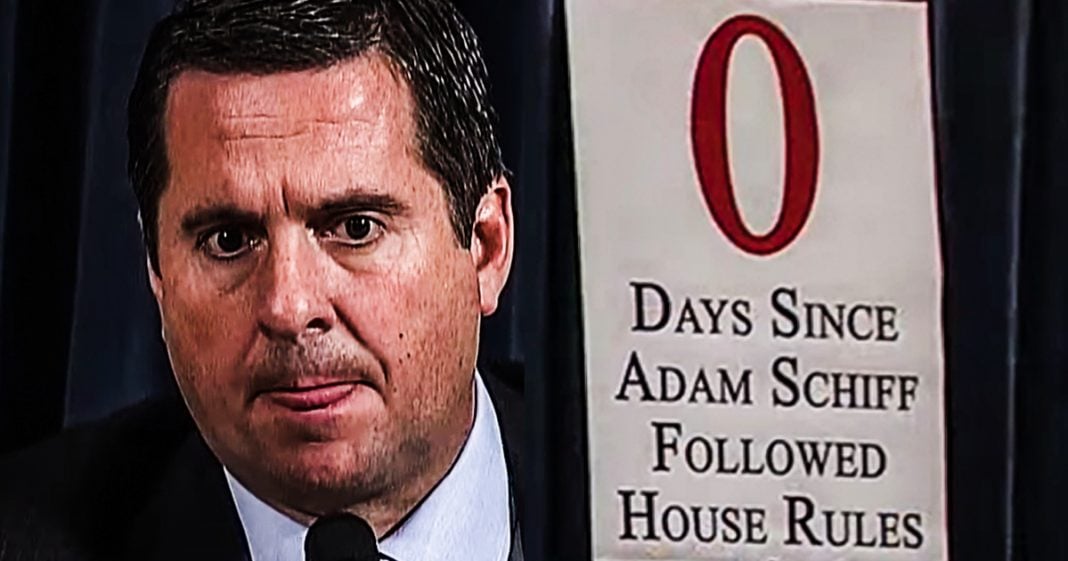 Republicans understand that they can’t win the impeachment arguments on merit, so instead they are attacking the process and attacking Chairman Adam Schiff. Yesterday after a break in the hearings, they trotted out a sign that read “0 Days Since Adam Schiff Followed House Rules.” The sign was supposed to be an attack on Schiff, but it actually means that he’s been following the rules. Ring of Fire’s Farron Cousins explains.

*This transcript was generated by a third-party transcription software company, so please excuse any typos.
What’s happened so far with this impeachment inquiry has been really bad for Trump. It’s been bad for Republicans and Giuliani and Mulvaney and Pence and everybody else the president’s ever spoken to in the oval office. But Republicans knowing that they cannot defend what these witnesses have said are instead trying their tried and true tactic of attacking the process, which they had been doing since long before the hearings were even made public. So yesterday after a little bit of a break, Republicans on the house intelligence committee came back from their break and they had, apparently they’ve gone and made a sign and they put the sign up and that sign was supposed to attack Adam Schiff. They were supposed to show the world what a corrupt jerk Adam Schiff was. But really all the sign did was show how incompetent and foolish Republicans on the house intelligence committee truly are. The sign said zero days since Adam Schiff followed house rules. It has been no days since Adam Schiff followed the rules, which of course, obviously means Adam Schiff is following house rules. Now, if they wanted to say that Schiff is not following house rules, they should have put a different number up there other than zero. It should have said 30 days since Adam Schiff last followed the house rules, 40 days, a hundred thousand days, whatever it is. But when you say zero days, since he didn’t follow the rules, that means he’s following the rules every day. You morons literally, yet you had one job, one job to make a little bitty sign to be like, Hey, we get a Schiff. And you guys couldn’t even do that and you’re supposed to somehow be out there defending the president. We’re supposed to believe that you people know what you’re talking about when you’re doing this questioning. We’re supposed to believe that you are the competent ones in the house of representatives who care about following the rules. Look, here’s the sad truth. First and foremost, I am not a huge fan of Adam Schiff. I don’t like him because he is a bit of a corporatist, a little too much of a centrist. Um, but all of the other attacks on Schiff, even some coming from the left are bizarre to me. I don’t understand it. I don’t get the hate that’s Schiff. A Schiff is getting, but nonetheless it happens. But Republicans are attacking Schiff because he’s absolutely obliterating them. Right now I think Adam Schiff is playing this perfectly and Adam Schiff is not breaking any rules in terms of these impeachment hearings. Really. There are no rules. They get to set the rules, they get to do it the way they want to do it. And because the Democrats are the majority, they can kind of do whatever they wanna do. Cause they set the protocols for this. It’s up to them. And even still, Schiff isn’t breaking any rules and they’re not even doing anything that’s absurd or crazy right now. But that’s all Republican has attacked the process cause you can’t defend the impeachment on its merits. So you go after the process, you go after Adam Schiff, you go after other members of this committee, you attack Nancy Pelosi was not even involved in this stuff. And you somehow think that that is what’s going to resonate with the public and not the parade of people coming in to say, yeah, the president did a crime.