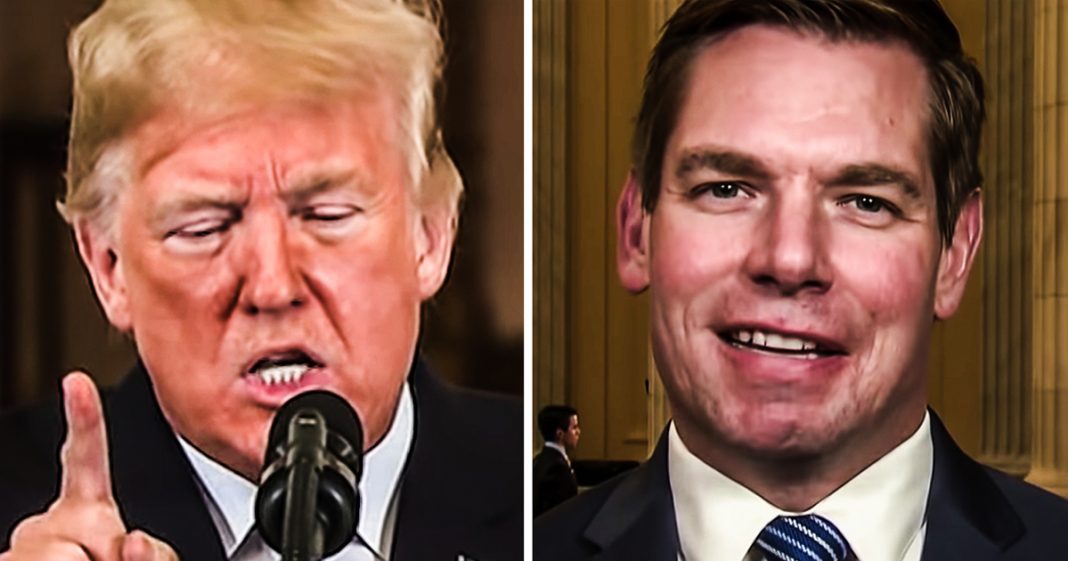 Donald Trump grew furious on Thursday when Fox News had the audacity to bring on Democratic Representative Eric Swalwell. Trump believes that it is unfair for the network to even talk to Democrats because he is the one who has been so kind and loyal to them, so he expects the same in return. These are the rantings of a madman, as Ring of Fire’s Farron Cousins explains.

*This transcript was generated by a third-party transcription software company, so please excuse any typos.
Donald Trump has been pretty angry recently as these impeachment hearings are showing more and more information that’s really, really damaging for his presidency. But yesterday he flew off the handle because Fox news had the audacity to get this interview a Democrat on live television. I know it’s shocking, right? A news organization, or at least an organization that has news in the title thought it worthwhile to bring on a Democrat who happened to be a part of the impeachment hearing of that day and that set Trump off. He tweeted the following, he said, why do @Shane and bream and at Fox news waste their time on Democrat representative Eric Swalwell, who recently left the presidential primaries having attained a grand number of zero in the polls. I don’t even know how that is possible. Fox should stay with the people that got them. They’re not losers. I’m about to give Donald Trump a lot of credit right here because I am shocked folks. I am shocked that when he was talking about Eric Swalwell, he did not bring up fart gate. That shows that maybe this man has a little bit more restraint than we thought he did. And of course to Swalwell’s credit, the interview on Fox news went off without a anything going off I should say. So yeah, good for Swalwell there, but at the same time, what the hell is Donald Trump talking about? You? You, you should stay with the people that got them there. Got who were you? You didn’t do this. Fox news was already killing it and the ratings long before you even thought about running for president. That’s kind of always been their thing. It sucks. But let’s be honest, they’ve always had the best ratings because conservatives have to tune in to get their talking points. Democrats. Liberals were capable of making up our own minds and forming our own opinions. Republicans aren’t so they tune into Fox news and that’s why they’re popular. But you didn’t knew that you had nothing to do with the success of Fox news. So what are you talking about? Stay with who brought you or who got you there that that’s nuts. This man is nuts. These are the rantings of a madman who also happens to have access to the nuclear codes and could at any given point should the mood strike him, issue a nuclear attack anywhere on the planet and we couldn’t stop him. But luckily instead he’s sitting around probably in his little recliner all day long watching Fox news. That’s what this guy does when he’s not out there spending money at his own golf courses. Just Fox news all day and Twitter and commenting on Fox news on Twitter, complaining about Fox news on Twitter when they don’t do exactly what the man wants them to. Let’s remember, Neil Cavuto not that long ago, had to do a whole little segment, a little monologue about the fact that Fox news doesn’t work for you. Mr. Trump. Yes, they blindly support you, most of the folks on the network, but they don’t actually work for you. If you want them to, then by all means go ahead and hire him as Sean Hannity to come be your new communications director. Ask Tucker Carlson to be your chief of staff. Their politics aligned right up there with yours. You probably got to get rid of Steve Miller now, now that we’ve all seen him in the white hood, so maybe Tucker Carlson would be a good replacement for him, but if you want Fox news host to do what you want them to do, then you’ve got to hire them yourself. Because even as horrible as that network is, they still occasionally do have a mind of their own.