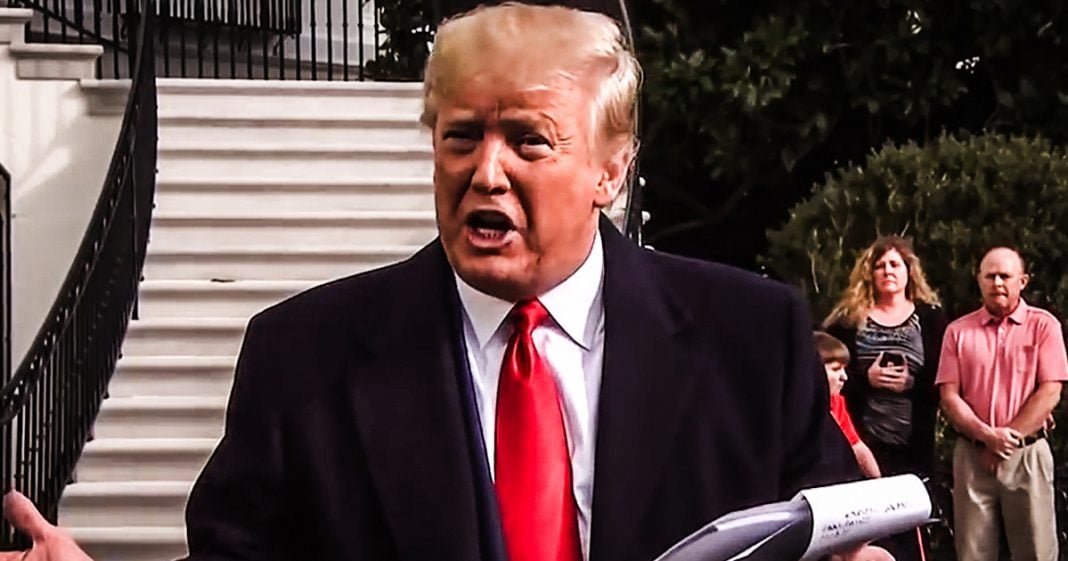 Donald Trump held a brief press conference following yesterday’s explosive impeachment hearings, and he seemed to be further off the rails than usual. While reading from GIANT notes written in Sharpie, the President claimed that he did nothing wrong and that he never wanted anything from Ukraine. But that’s what he said only AFTER they learned of the whistleblower report. Ring of Fire’s Farron Cousins discusses Trump’s latest tirade.

*This transcript was generated by a third-party transcription software company, so please excuse any typos.
So after yesterday’s explosive impeachment hearings in the house of representatives, Donald Trump decided it was time for him to go out, not talk to Congress, but talk to reporters or essentially yell at reporters because they had a helicopter going in the background. And to be honest, this was one of the more bizarre and unhinged press conferences the president has probably ever given. And here it is.
[And now here’s my response is that he gave you just gave. Ready? You have the cameras rolling? I want nothing. That’s what I want from you, Greg. That’s what I said. I want nothing. I said it twice though. He goes, he asked me the question, why do you watch? I keep hearing all these things. What do you want? He finally gets me. I don’t know him very well. I have not spoken to him much. This is not a man I know well, seems like a nice guy though, but I don’t know him well, he was with other candidates. hE actually supported other candidates. Not me. Same as late. But here’s my response. Now, if you weren’t fake news, you’d covered properly. I say to the ambassadors, respond, I want nothing. I want nothing. I want no quid. Pro quo tells Zolynskey, president Zolynskey, good, do the right thing. So here’s my answer. I want nothing. I want nothing. I want no quid. Pro quo tell Zolynskey to do the right thing. Then he says, this is the final word from the president of the United States. I want nothing. Thank you for folks have a good time. I’m going to go.]
So I love the fact that he comes out there and essentially starts the whole thing like it’s a wrestling promo. Like everybody gathered and you’ve got those cameras rolling. Who’s here we go. And then he proceeds to read his gigantic notes that he has written. I want nothing. I want nothing. I want no quid pro quo. Did you? Did you really have to remind yourself to say that? Like you couldn’t remember that off the top of your head that you didn’t do the crime. You had to actually write it down so you didn’t forget to say, Oh by the way, I didn’t do the crime. And let’s also not forget as we have discussed as others have discussed, as Gordon Sonland discussed in his testimony, Trump did say those things to him, but he said those things to Sonland after the whistleblower complaint came to light. So after he got busted, then he comes and says, no, I’m sorry, I didn’t want you to do crimes. whoops slip of the tongue I guess. But Trump looked frantic. He looked angry and he also terrified in that press conference yesterday, which is why at the end of it he tried to distance himself from Gordon Sonland. I don’t really know this guy. I mean who? Who is he really? Who are any of us? He seems nice, but I don’t know him. Gordon Sonland gave you $1 million. You know him. He gave you $1 million for your inauguration party. You know him. You chose him to be the ambassador to the EU based on the fact that he gave you $1 million. You know him. There are pictures now going around of you and Milania walking and talking. Very friendly with Gordon Sonland. You know him. There is pictures of Gordon Sonland speaking to you aboard air force one. You know him, you know him very well. You know who we is. You know what you directed him to do. You are not going to distance yourself from the man who just threw you under the bus, but that is what Trump is going to try to do. And I guarantee you we’re going to see that talking point come out of more and more Republicans throughout this country. They’re going to say, well, how was he supposed to know this guy? He has no idea who he was. So I want you to repeat everything that I just said. Million dollars, photographic evidence. And of course Donald Trump personally picked him to be the ambassador. You don’t just pick a random stranger to be the ambassador to the European union. You don’t just walk on the street and say, Hey you, what’s your name? Cool. Get your passport. You’re going to Europe, you’re ambassador. Now, that’s not how this works, but that’s how Trump wants his followers to think that this worked, but it’s not. Sonland knew what he was talking about. He came prepared yesterday and he came prepared to throw every single person under the bus. And why is that? Well, Amanda Marcotti written for salon.com explained it perfectly. Sonland is just your typical average super wealthy Republican, bumbling idiot. And now suddenly he finds himself embroiled in this massive criminal investigation and he wants nothing to do with it. He just wanted to give his money to Trump, get this ambassadorship, have a lot of fun doing it. But now he’s involved in this organized criminal enterprise and he wants out, this isn’t what he signed up for the system, what he wanted and he certainly doesn’t want to go down for protecting anybody. So Sonland is going to keep throwing people under the bus if has to, and Donald Trump is going to keep claiming that. I’ve never met the man if he has to do that. Donald Trump, that’s going to be a standard defense for most of these people. I don’t know him. I’ve never met this person. Who are they again? Why are they dressed like that? And eventually Mark my words. There will come a day when he is going to say something similar about Rudy Giuliani. You just wait.