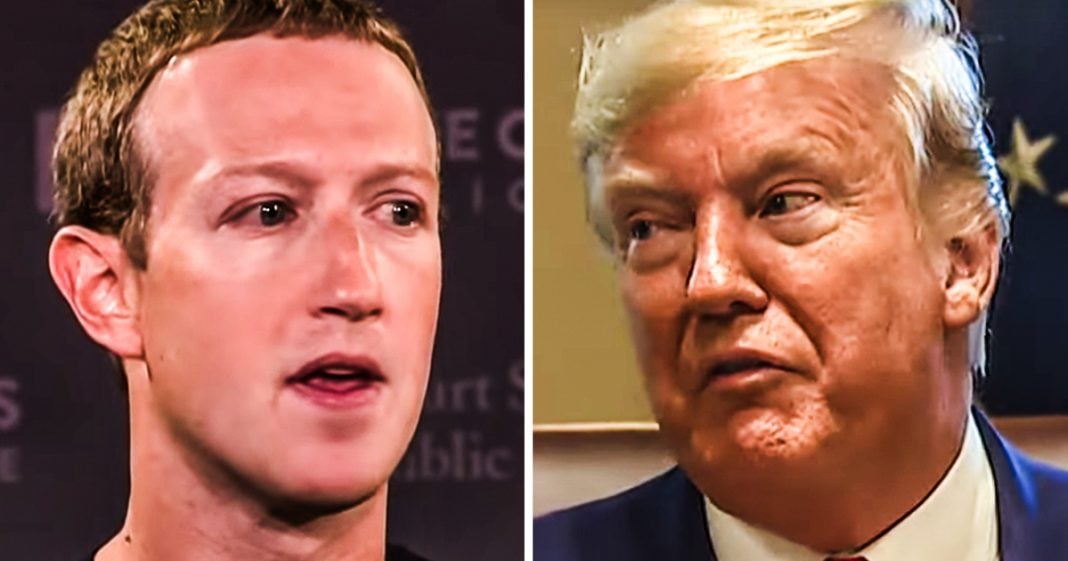 Facebook has confirmed to The Hill that CEO Mark Zuckerberg had a secret meeting with Donald Trump at the White House last month after he testified to Congress. Zuckerberg wants to be even wealthier, and he is going to suck up to every single disgusting, pro-corporate politician that he can get access to, and with billions in the bank, he can gain access to almost anyone. Ring of Fire’s Farron Cousins explains what’s happening.

*This transcript was generated by a third-party transcription software company, so please excuse any typos.
It’s now been confirmed that last month, October, Facebook CEO Mark Zuckerberg, attended a secret dinner meeting at the white house with Donald Trump. Now this was on the same trip that Mark Zuckerberg had to go to DC and testify in front of Congress about the cryptocurrency Libra that Facebook is trying to launch. So in addition to controlling all sorts of, you know, information, our browsing histories, our, our, our cookies or cash all of that Facebook now wants to also control our money. It’s a social media network and now they want to get into the banking industry, the crypto banking industry. So yeah, Congress had some questions for mr Zuckerberg that he did a very poor job of answering, by the way. And then he left there to go to his secret unreported meeting with Donald Trump in the white house. Now this is the second private meeting that Zuckerberg has had with Donald Trump. And the meeting was only first reported about today, so they kept it secret for close to a month. But here’s the thing, Zuckerberg is a corporatist. Let’s not pretend that he has any kind of philanthropist that he has any kind of liberal or that is even really a conservative because he’s none of those things. He is a guy motivated by money and power and he will suck up to any other person with money and power that he has to in order to get more of it. And that’s why he’s meeting with Donald Trump. No, I’m sure. Even though we don’t know what was said in the meeting, it’s pretty obvious what was discussed. Donald Trump wants Facebook to stop banning conservatives, which they’re not even doing conservative posts on Facebook get more views, more shares, more widespread attention than Progressive’s ones. Uh, studies have proven that that’s proven, but Republicans think it’s a great talking point to pretend like these tech companies are against them, even though they’re very much in their pockets. So it’s pretty, pretty safe bet that Donald Trump talked about that with Zuckerberg. But what does Zuckerberg want? He wants money and power, but how does he get that right? Well for one he has to stop all this talk of antitrust laws being enforced for Facebook. You know, the social media giant slash advertising giant slash crypto bank slash tech developer now, cause now they’ve got those little camera things you put in your house and talk on your TV to your friends. You know, rather than just using your phone to do that. Yeah, this is really convenient, Mark. But anyway, they’re involved in everything now and they want to be involved in more. But those pesky laws and regulations that we have in place as a country just just won’t let them do it. So he’s got to make friends with the big guy in the white house. He’s got to make friends with these horrid Republican politicians. The ones who are out there lying about Facebook shadow banning conservatives, he’s got to go suck up to them. It may be a little humiliating for Mark, but at the end it’s probably going to make them a lot of money. So he’s willing to do it. I don’t know what Mark Zuckerberg was before he created Facebook. I have not seen the movie, the social network, nor do I ever intend to. It. Never interested me. Just wasn’t my thing. But I can tell you what Zuckerberg is now. He is a power hungry, corporatist. So whatever he was before that no longer matters. What matters is what he is today. He’s not a philanthropist. He’s not a conservative or liberal. He is a corporatist who just wants to put more money in his own pocket because once he got a taste of that, he realized that’s all he wants out of this world.