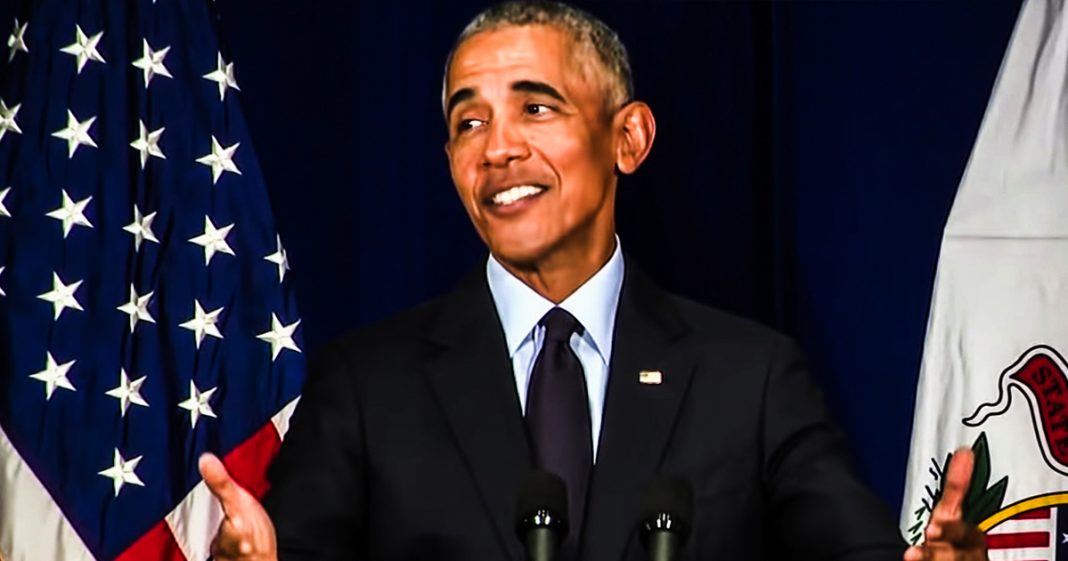 After last week’s meeting with Democratic donors where he said that some candidates are going “too far left,” former President Barack Obama is prepared to launch the same attack again today in front of even more donors. Obama is going to lose what little bit of good faith he retained from his presidency if he continues going down the path of attacking progress, as Ring of Fire’s Farron Cousins explains.

*This transcript was generated by a third-party transcription software company, so please excuse any typos.
So last week, former president Barack Obama gave a speech to some wealthy democratic donors where he warned them that there is a couple of democratic candidates. He didn’t name them by name, but there was a couple who were a little too far left. He said, you know, you don’t have to burn down the entire system to get a better system. And he said, you know, don’t go too far left with these extremist policies. Be more realistic about what we can do. And as a ring of fire cohost, majority report hosts, Sam Sedar pointed out on Twitter. That’s the audacity of, Nope, a play on the fact that Obama was the guy who wrote the book, the audacity of hope. Now he’s telling us, how dare you have hope. Now, that was last week. So today, at some point today, Barack Obama is going to be out in San Francisco and he’s going to meet once again in a room with wealthy democratic donors. And according to his handlers, he is going to deliver that exact same message that pissed off so many Democrats and progressive last week. Because that is the message that Barack Obama has settled on as we inch closer to the 2020 presidential election. Don’t dream big, aim low and just hope that maybe you could do one or two good things if you win the election. Here’s what makes me so mad about this. Obama left office with a decent amount of Goodwill from Democrats and liberals and progressives and even some Republicans out there. He did a couple of decent things during his administration. Obamacare helped a lot of people get insurance. It didn’t go far enough. That’s why we’re having the discussions we’re having now. Um, he did some good things for the environment, most of which were immediately offset by bad things he did for the environment that did not get as much publicity as the good things he tried to do. I wrote about them extensively throughout the entire Obama administration and I know what I’m talking about. For example, his clean power rule, you know the center plea piece of his environmental regulations, the emissions that would have been reduced under that were actually immediately offset less than a month after he put that in place. Because of all of the new coal plants that he green-lighted that we’re going to release as much as much emissions as would have been cut by the clean power rule. And I talked about it back then, I wrote about it back then. I cited the studies, I cited the statistics and what did people do? They yelled at me for attacking Obama. They yelled at all of us here at ring of fire for eight years for going after Obama for not being progressive enough and now Obama is out there yelling back at everybody else. Warning us to not be Progressive’s. We’re not going to change who we are. We’re not going to change what we do. And the candidates who are running the furthest to the left better not change either. And part of the reason for that is one, if you do, then you weren’t authentic to begin with, but to the public will get pissed because I don’t think Obama understands polling. I don’t think he’s paying close attention because polls show that guess what? And majority of people, and that includes a lot of Republicans. Sometimes majorities of Republicans do want Medicare for all. They do want debt-free college. They do want big money out of politics. They want the green new deal. They want all of these far left things that Obama is going to be yelling about today as being too far left. And again, it’s important to take the venue into account. Last week when he said these things, he did it to a room full of wealthy democratic donors. Today as his handler say, he’s going to go say a similar thing. It’s also going to be in a room full of wealthy democratic donors because those are the only people that Barack Obama talks to today. Those are the only people that matter now, he doesn’t have to wear the veil of I care about all the other people to. No. He’s not president anymore. All he has to do is go out there, raise a little bit of money for the DNC and his job is done, but he’s doing it by demonizing the very candidates who stand the best chance of beating Donald Trump. And the best chance of fixing everything wrong with this country. The very problems, by the way, that Barack Obama ignored.