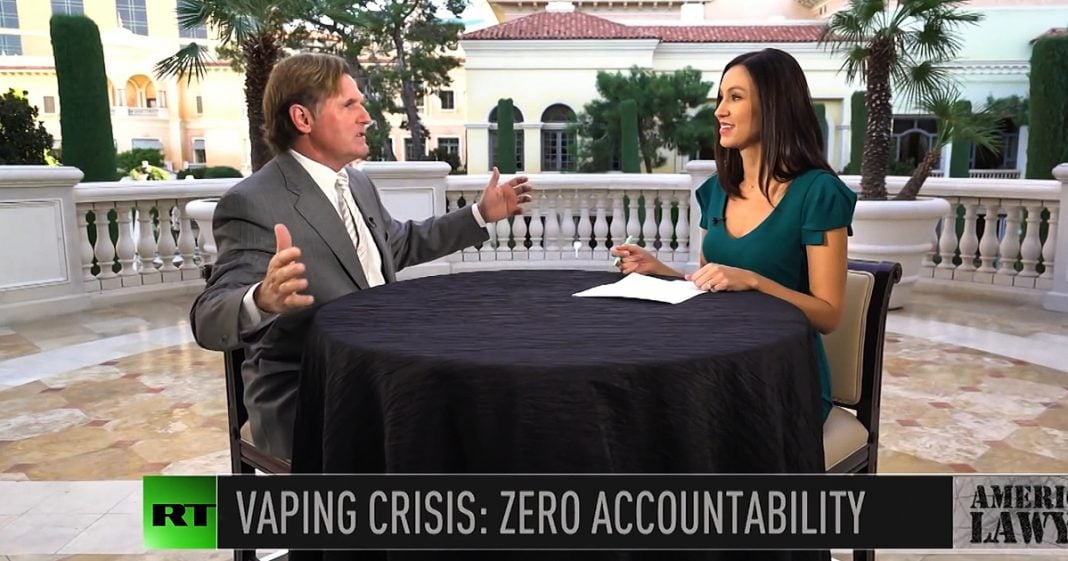 Via America’s Lawyer: Brigida Santos and Mike Papantonio discuss how the litigation against Juul for its aggressive marketing toward teens is a mirror image of what happened decades ago with the tobacco industry. The manufacturing and distribution of vaping products have gone virtually unregulated by the FDA and CDC, leaving over 30 people dead from ‘mysterious’ lung diseases brought on by enticingly-packaged and flavored vape products. What’s more, Juul is owned in part by Philip Morris, which has every incentive to hook young consumers on nicotine.

Brigida Santos:                   I’m sitting here with Mike Papantonio, host of this here show America’s Lawyer, we’re here to talk about the Juul litigation. All right, Mike, CDC says, 1400 people have been injured or made ill by these e-cigarettes. Juul is a top e-cig producer. 33 people are dead. What’s the latest with this case?

Mike Papantonio:             Well, of course, the CDC is behind the power curve right now and that’s because the FDA has done such a terrible job here. As you may or may not know we handled, my law firm handled the, the tobacco litigation. We launched the tobacco litigation nationally. It launched right in Florida. And so what the FDA has done again is missed it again. And, you know, so right now we’re trying to figure out why are these kids dying? What’s causing them to have seizures? What are these illnesses that we’ve seen that we’ve never seen before? And that’s because the FDA from the very beginning was told by consumer groups, get involved in this process because this vaping has potential to harm a lot of people.

But it’s the same people who brought us tobacco. Okay. It’s the same people who killed millions and millions of people all over the world. And this is how they think. That it’s, not to them, it’s, it’s just, it’s, it’s a meaningless statistic. They’re making more money than they can spend. This, this company is growing at leaps and bounds and it’s at the, it’s at the cost of lives all over the country.

Brigida Santos:                   Yeah, let’s bring it back to big tobacco. We’re seeing history repeat itself. E-cigarettes are just the next iteration in this big tobacco market. As you said, these are the same people involved right now. The new CEO, K.C. Crosthwaite, comes from Phillip Morris’ USA parent company. So talk about that.

Mike Papantonio:             Well, Burns of course is the guy that preceded him and he had to resign because he lied to the American public. He went on television time after time saying A, we’re not trying to sell this to your children and yes, they were, the documents clearly show they were targeting 14 year olds. And so once we saw that lie, we saw the next lie in that is, this doesn’t hurt you. And we’ve figured out that’s a lie because we have people dying as we speak. So, so look, if I were to go back and take the file cabinet of all the documents we have from the cigarette litigation, I could pull them out one by one and say they’ve now taken exactly what they were doing back then and they’re doing it now.

And the media has totally dropped the ball because these people are big advertisers. Just like we saw with, just like we saw with tobacco, millions and millions of people died because corporate media did not have the guts to tell the story. They knew the story two decades before it ever, before they started talking about it. The reason they didn’t do the story is tobacco was spending so much money advertising for them.

Brigida Santos:                   Yeah, and let’s talk about the people who do get harmed by this. It’s really easy to forget about them. So I’d like to highlight the human aspect of this. The first wrongful death lawsuit was filed in October against Juul Labs Inc. The mother of an 18 year old boy who died, Daniel David Wakefield.

Brigida Santos:                   He had been using Juul cigarettes regularly, got very addicted to them since he was 15 years old. So for three years this was going on. You know, in Colorado they estimate that 40% of the teen population is addicted and now even school districts are suing the company.

Mike Papantonio:             Yeah. Here’s, here’s what everybody’s missing, Brigida. This, this case is not really about vaping.

Mike Papantonio:             Okay. The vaping is a way to get kids addicted. Okay. Once you have them addicted, they then move back into, into traditional tobacco. That’s what this is about.

Mike Papantonio:             The, the vape, the vaping is to get them addicted. They actually hired dozens of addiction experts and the addiction experts had one thing in mind. It wasn’t to prevent addiction. It was to say, how do we get these people more addicted and how do we get them addicted early? Here’s what the tobacco industry knows. This is what we found out in the tobacco litigation. The documents that came from that litigation show that if we can get a child addicted at 14 years old, 14 is like the perfect time. If we get them addicted at 14 years old, then there’s brand loyalty for the entire adult life of that person. So how do, how are they doing it here?

They’re putting flavors, ollie ollie orange, Michael, Mikey mint, goofy grape. And these kids are, they think they’re eating candy, Brigida. They’re, they’re taking in more poisons than you would get walking through a typical factory in America. And so, and the problem is this didn’t just happen, this was a plan. The documents will show that step-by-step they did exactly what the tobacco industry did and they’re using exactly that play game coming out of tobacco.

Brigida Santos:                   Yeah, and a lot of the parents don’t know that their children are vaping because it’s not like traditional cigarettes where you can smell it on your child when they come home. So parents may not know that their kids are getting addicted until it’s too late. And kids are smoking all the time now. Inside their houses or inside rooms because they don’t have to go outside to smoke a cigarette.

Mike Papantonio:             Well, there’s more to it than that even. If you look at the, what they’ve done is they’ve, part of selling vaping is to, to sell technology to young kids. Okay. The kid that’s vaping wants to say, I’m not like mom and dad, I’m smarter. I’ve got this thing that looks like a jump drive and I, it looks like it is part of my computer. And so part of the sale is to sell, to sell this cult like notion that the people who vape are different. We’re not like everybody else. We’re smarter, we’re younger, we’re hipper, we know what’s going on. Mom and dad, they were stupid. They were smokers, they got yellow all over their fingers. They had bad breath, they got yellow teeth. We’re smarter than all that. And that, that notion is what the vaping industry is selling to kids, to children and grandchildren of everybody in this country.

Brigida Santos:                   Now, Juul has temporarily suspended all of their marketing. So they’re not going to be advertising across, you know, digital platforms on radio, TV, you name it. Is there anything else that they’re doing that indicates where they’re going? Are they going to try to settle do you think?

Mike Papantonio:             The department of justice needs to man up. They, they, they need to do their job for once. These guys are white collar criminals and as I say, so many times they don’t look like criminals. They’re dressed up in nice suits. They don’t look like, these are criminals. These are people who engaged in fraud. They knew exactly what they were doing and it’s worse than that. If you kill somebody in any setting in this country, it’s called manslaughter at the very least, and if they’ve engaged in conduct that’s resulted in manslaughter, the department of justice needs to finally step up and do what they’re supposed to do. They didn’t do it in the Obama administration. They didn’t do it in this administration. We have a department of justice that looks at criminality that if you’re dressed up in an Armani suit, you’re not a criminal.

Brigida Santos:                   Right. Now, it took, you know, decades for the surgeon general to put a warning on tobacco boxes for actual cigarettes. What about e-cigarettes? Is there any kind of warning right now?

Mike Papantonio:             Well, no. I mean, at this point there shouldn’t, we shouldn’t even have to worry about warning. The product needs to come off the market. Okay. And if you’re going to warn, they need to spend, what they have to do right now is they have, it’s, it’s what we did in tobacco. Okay. Tobacco for decades and decades told a lie. They actually had advertising that said that this brand of tobacco is actually good for you. This brand of tobacco won’t hurt you. The scientists and doctors use this brand of tobacco, and if you use this brand of tobacco, you’re going to be okay. Okay. When we handled the tobacco litigation, part of our goal was to say that what you have to do is you have to spend billions of dollars undoing that lie. Okay. The same thing has to happen here. This industry, if they’ve made $50 billion, they need to spend $50 billion undoing the lie that they’ve created in this country.