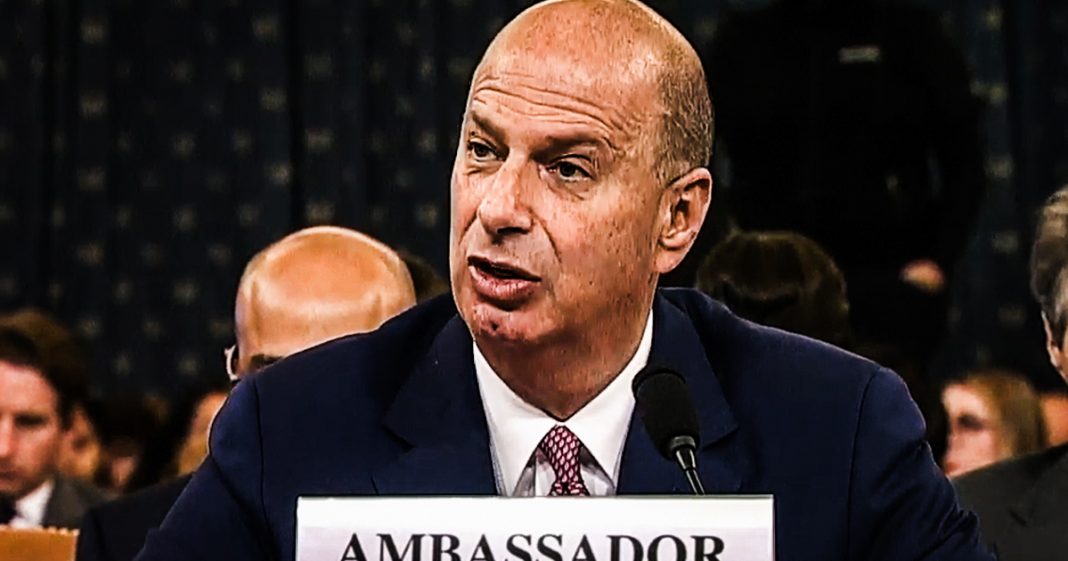 During his testimony on Wednesday, EU Ambassador Gordon Sondland made it crystal clear that Donald Trump was attempting to extort the Ukraine. But he didn’t stop with Trump. He also threw Giuliani, Attorney General William Barr, and a host of other Trump officials under the bus as well. The evidence is now clear: The President broke the law. Ring of Fire’s Farron Cousins explains what Wednesday’s testimony means for the impeachment.

*This transcript was generated by a third-party transcription software company, so please excuse any typos.
So yesterday, EU ambassador Gordon Sonland decided to not just take down Donald Trump, but to burn down the entire administration. Sonland opened up his statement yesterday by admitting that there was a quid pro quo, that there was extortion and it was based on Ukraine. Donald Trump wanted them to come out and announce an investigation into Joe Biden and that was the condition that they had to meet if they wanted that aid.
[I know that members of this committee frequently frame these complicated issues in the form of a simple question. Was there a quid pro quo? As I testified previously with regard to the requested white house call and the white house meeting, the answer is yes. Mr Giuliani conveyed to secretary Perry, ambassador Volker and others that president Trump wanted a public statement from president Zolenski committing to investigations of barista and the 2016 election. Mr Giuliani expressed those requests directly to the Ukrainians and mr Giuliani also expressed those requests directly to us. We all understood that these prerequisites for the white house call and the right white house meeting reflected president Trump’s desires and requirements.]
That was Sonland’s opening. Like that’s not even what came up in the question. That dude’s started his entire testimony with this and it got so much worse for Republicans. After that, he went on to implicate Mick Mulvaney, Rick Perry, um, Mike Palmpeo, Mike Pence, Bill Barr, and of course Rudy Giuliani, Donald Trump’s lawyer. Now he said that Giuliani was the one who is carrying out these orders and everybody was working under Giuliani, but the orders were coming directly from Donald Trump. Giuliani was the conduit, but Trump was the guy, in fact, pulling the strings. This is everything that we gathered from Gordon Sonland’s testimony. And what’s really interesting is that Republicans really didn’t have a lot to say. Now you did have Ronna McDaniel tweet out at the end of the day that Sonland somehow vindicated the president because Sonland did of course say that. Yeah, Trump told me he wanted nothing from Ukraine, wanted nothing, no quid pro quo. And they latched onto that statement. It said, see Sonland it, he admits Trump didn’t want any of this except they left out the very convenient fact that Trump did. In fact, say those things to Sonland. But he said it after he learned of the whistleblower report. So after he got caught, then he came out and said, Oh, no, no, no. I didn’t want this. No, that’s not me. That’s not what happened. But Republicans somehow by leaving out the first part of, Oh, after he got busted, he said he never wanted to do a crime and they’re latching onto that. But that tells me one thing and one thing only. These folks aren’t going to turn on Donald Trump. There is no question left that Donald Trump committed this crime, that he’s being accused of the extortion. He did it. He did it. Everybody who was around him, everybody who heard the phone call, everybody who talked to somebody who heard the phone call, they say he did it, he did it. And unfortunately it’s not going to amount to anything. And that’s the truly depressing part of all of this because we did see it in the Republican response yesterday and Rhonda McDaniel’s tweet and Stephanie Grisham’s tweet in everybody else out there still defending the president. They’re not going to turn against this guy ever. I will be shocked if you even get a single Republican who votes in favor of impeachment in the house of representatives. Shocked if even one of them breaks ranks to go with the Democrats on that. It’ll still pass but then it’s going to go to the Senate. We’re at this moment precisely zero Republicans are going to support it. Now. I had said in the past if we enter into a scenario under which Republicans start losing support for their reelection based solely on their support for president Trump and not impeaching him, then maybe they’ll flip. I don’t even know if that’s going to happen now. I do think Republicans are going to lose support over this. I do think the public opinion, which is already shifting more and more in favor of impeachment, that’s going to go even further. Those numbers supporting impeachment and removal are going to get higher and I still don’t think at this point that it’s going to change a single Republican’s mind in either the house or the Senate. And unfortunately that means that all this is going to do is going to label him with that stigma of impeached but not removed. Maybe that’ll affect him in 2020 maybe the public won’t forget about all these crimes that he’s been accused of and people have admitted that he did in the next 12 months. But maybe they will, we won’t know until we get to that point. But based on what we’ve seen out of the public so far, 12 months is a long time in the world of politics. Long enough to, yeah, forget about even the most egregious crimes. So the Democrats unfortunately do need to stretch this thing out as long as humanly possible or else by next November, it’s going to be ancient history for most voters in this country.