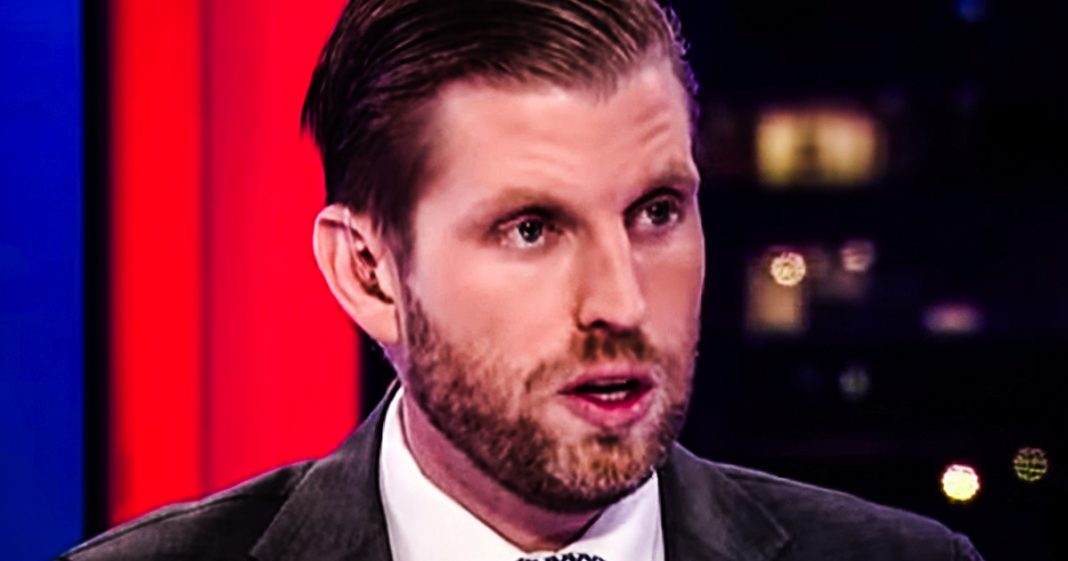 Leave it to the Trump family to find a way to profit off of almost anything. As Wednesday’s impeachment hearing was underway, Eric Trump took to Twitter to complain about the Democrats while also hawking his family’s Trump Wine. These shameless self-promoters will probably sell autographed prison uniforms if they ever face true justice. Ring of Fire’s Farron Cousins discusses this.

*This transcript was generated by a third-party transcription software company, so please excuse any typos.
Now there is one thing I have to give the Trump family a little bit of credit for and that is that they never miss an opportunity to make a quick buck. And yesterday Eric Trump as his father was getting repeatedly run over by that Gordon Sonland bus during the impeachment hearing. Eric Trump saw this as the perfect opportunity to create a little commercial of sorts for Trump wines. He tweeted out the following along with this picture, it said, it is a perfect day for a nice bottle of this. These people are insane at Trump winery. So really dude, your dad is getting accused of committing crimes. The guy who Republicans thought the day before would exonerate the president said he did crimes. So far, everybody who’s testified in the house of representatives has basically corroborated the same story, which is Eric, your dad did some crimes. Everything that Democrats have accused him of according to everyone who’s testified has been corroborated or confirmed. Democrats are looking great and you’ve watched all this. You’ve seen your father have meltdowns on Twitter and in front of the press because of this. And you thought, you know what, this is a perfect opportunity to remind people about Trump brand wines when the impeachment gets too tough and you just need to hit the bottle. I mean, look, I understand that. Yeah. If I were in the Trump family, I’d probably be hitting the bottle pretty hard right now to, things aren’t going well for you. They’re not going well for you in the impeachment hearings. They’re not going well for you in the public pollings. They’re certainly not going well for you up with those prosecutors up in New York, buddy. So you know what, have another glass maybe open up another bottle and go ahead and stock up on some of that Trump wine to make sure you have some on hand, because I can promise you, Eric, as this situation goes on, as the impeachment inquiry continues, things are only going to get worse for your dad. So yeah, have another glass because this thing’s really just getting started.