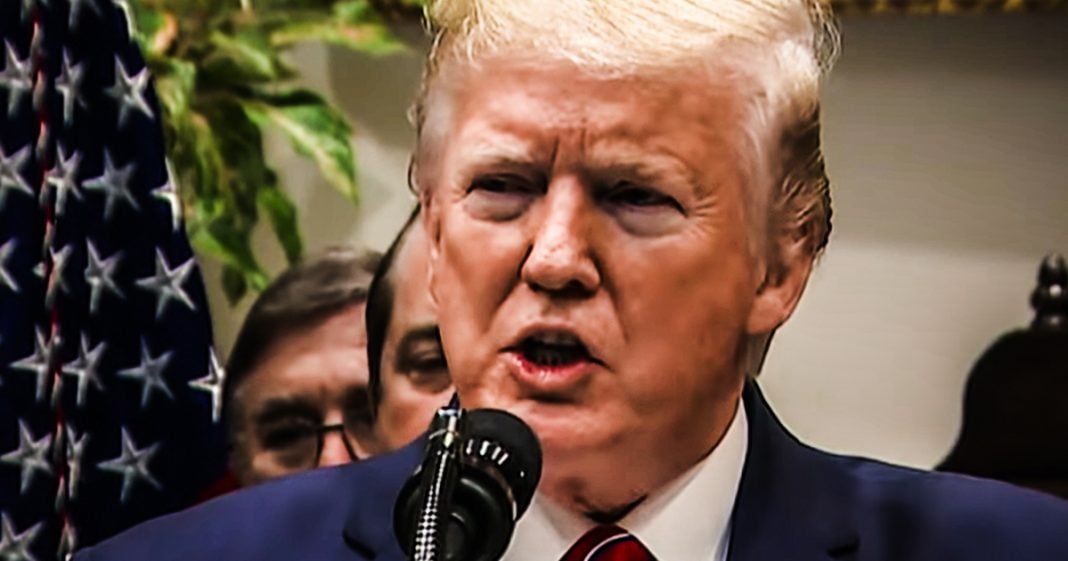 The book written by an anonymous White House official has a few more bombshells to drop on the public, the most recent being the claim that Donald Trump regularly can’t remember things, gets confused very easily, and is very quick to anger and lashing out at those around him. All of these are very clear symptoms and warning signs of dementia, something that mental health experts have also hinted at over the years. Ring of Fire’s Farron Cousins discusses these new claims to determine if they fit the criteria of dementia.

*This transcript was generated by a third-party transcription software company, so please excuse any typos.
Yesterday. The book, A warning was released written by an anonymous white house official, and there’ve been plenty of stories over the last week or two with some, you know, pretty significant bombshells from this book that came out again, written by somebody who allegedly works in the white house, but we don’t know who it is, but a bombshell that might be bigger than the rest came out today. And that bombshell is that according to this anonymous white house official, Donald Trump has severe problems remembering things he’s told, remembering things he said. To put it bluntly, the president’s memory is failing him, but that’s not the only thing. Here’s a couple of choice excerpts from this part of the book. He stumbles, slurs gets confused, is easily irritated, and has trouble synthesizing information. Not occasionally, but with regularity. The president also can’t remember what he said or been told. Americans are used to him denying words that have come out of his mouth. Sometimes this is to avoid responsibility, but it often appears Trump genuinely doesn’t remember important facts, including things that he has said. Now, we have done plenty of segments over the years. About Donald Trump saying that he in fact didn’t say something. We’re telling people to deny the reality that is right in front of them and at the time it was just, yeah, obviously this guy’s just lying because he wants to make himself look better or protect himself from things he said in the past, but if what this anonymous author says is true, then Trump is very clearly suffering from dementia. Now, I am not a mental health professional. Let’s get that straight, but I have done quite a bit of studying and cognitive neuroscience. I know a little bit more about the human brain and conditions than the average person. I would like to think thanks to my studies, but at the same time we also have had real mental health professionals. People who do this for a living suggest that the president is suffering from dementia. We have also had people say that he’s suffering from Alzheimer’s. I don’t think this is Alzheimer’s. I would go with dementia on this and here’s why the symptoms fit. Yes. Some of the symptoms fit with Alzheimer’s, but Trump has other symptoms that fit with dementia and not Alzheimer’s, specifically the slurring of the words, the awkward posture, because dementia does affect muscle and bone movement, and the irritability and impulsivity. Those are things you will see in dementia patients, but you won’t see them in Alzheimer’s patients. And that’s why it’s much more likely that Trump has dementia, not Alzheimer’s. Although at this point, we can’t rule anything out. And of course, we obviously cannot make an official diagnosis, but the symptoms fit. And for those wondering, here are some of the symptoms of dementia. Cognitive symptoms include memory loss, mental decline, confusion in the evening, hours, disorientation, inability to speak or understand language, making things up, mental confusion or inability to recognize common things. Behavioral problems include irritability. Yeah, personality changes, restlessness, lack of restraint or wandering and getting lost. Now we haven’t seen Donald Trump wander off and get lost yet, but give it time. Uh, mood symptoms include anxiety, loneliness, mood swings, or nervousness. Psychological problems include depression, hallucination, or paranoia. Also common is falling jumbled speech, sleep disorder, inability to combine muscle movements or unsteady walking. Now, Trump does not have all of these things, but as you’ll also notice, some of those symptoms I just read off are the exact same symptoms that this anonymous author says are very evident in the president, and to be honest, we don’t even need the anonymous author to tell us that. Again, we have talked about this on numerous occasion when Trump denied saying things that we have video of him saying when he’s giving a rally speech and suddenly just starts to slur and words form together and wondering what the heck is going on or his dentures coming out. People have suggested in the past, maybe it’s something more simple, maybe it’s a symptom, but the bottom line is this. We don’t even need this anonymous official if they are even at official to tell us these things because mental health professionals have been warning us about these very things for about two years now. So maybe instead of listening to somebody whose name we don’t even know, maybe we should listen to the hundreds of mental health professionals who aren’t afraid to tell us their name and who have the background to tell us that there’s something wrong with the president’s brain.