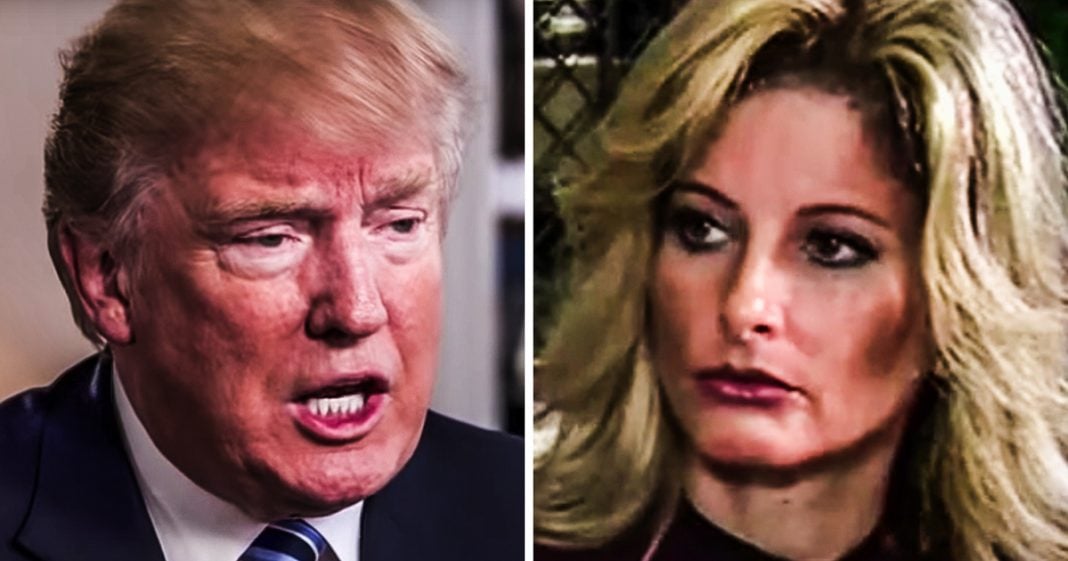 A judge in New York this week ruled that Donald Trump is not immune from the defamation lawsuit filed against him by former Apprentice contestant Summer Zervos, and the judge refused to throw out or even halt the case. Thanks to the Republican impeachment of Bill Clinton in the 90’s, a sitting president CAN be sued for non-official acts, and that ruling that Republicans forced in the 90’s is now coming back to bite them hard. Ring of Fire’s Farron Cousins explains what’s happening.

*This transcript was generated by a third-party transcription software company, so please excuse any typos.
Well, Donald Trump suffered another major legal setback earlier this week when a judge in New York said that she will not dismiss or even issue a stay in the defamation lawsuit against the president filed by former apprentice contestant Summer Zervos. Now, this is one of the longest running lawsuits against the president, and for those who are not familiar with it, let’s take you back. A couple of years back in 2016 former apprentice season five, contestants Summer Zervos came forward and said that on three different occasions, twice in New York, once in Beverly Hills, Donald Trump pushed her against the wall, forcibly kissed her. She did not want it. She did not like it. She felt that that was assault. And so she came forward with her story after she came forward with the story, which yes, by definition, that is assault by the way. Uh, Donald Trump came out and said, Nope, this never happened. She is a liar. He proceeded to attack her on Twitter and in interviews. And as a result, Miss Zervos filed a defamation lawsuit against the president for calling her all of these horrible names and attacking her very publicly. And now for the second time this year, a judge has said, guess what mr president, you are not in fact above the law and you may even have to be called to testify in this case and that’s going to be horrible for the president. But here’s the thing, here’s what I love about this lawsuit other than the fact that we need to listen to the accusers is the fact that it’s the Republican’s fault. And here’s what I mean. You know, back during the Clinton years in the nineties they were trying to pop bill Clinton on anything they could find, you know, Oh, was it harassment over here? Did he, did he rape this person? Did he have some kind of shady real estate deal? They investigated everything, sound familiar and as part of it, president ended up getting sued for harassment. Republican’s help to spur that on and get it going. And they thought, Oh, we got them with this, she’s going to take it from here. Well, the Supreme court got ahold of that case and Clinton’s lawyers tried to argue that, Hey, he’s the president of the United States, right? He can’t be sued for this. And the Supreme court said, no, actually you can, the president of the United States can in fact be sued for non-official acts. Basically that means like the president can’t be sued for a policy he puts in place. But if the president goes out and harasses somebody, yes, you can be sued for that. Bill Clinton was, and now Trump’s being sued for defamation. And a judge back in March actually cited that Clinton case from the Supreme court and said, Hey, you’re not above the law and you can kind of thank Republicans for that, for making all of that come about. But nonetheless, this lawsuit does need to go forward. And I hope Trump does get called to testify because we need to hear in his own words why this woman is a liar. Because after all, if he can prove that she is a liar, then there’s actually no defamation. But in order to prove that she’s a liar, he will have to prove that he did not in fact assault her. See, this case isn’t about the assault. It’s about the name he called her and the damage he has done to her character. But in order to defend himself against that, he will in fact have to defend himself against the claims of assault. That’s what’s great about this, and I believe this is why Zervos’s attorneys decided to go this route because if she wants to sue him for defamation, he wants to say he didn’t defame her. The only way to do that is the prove that he didn’t assault her, and I don’t think the president is going to be able to do that.