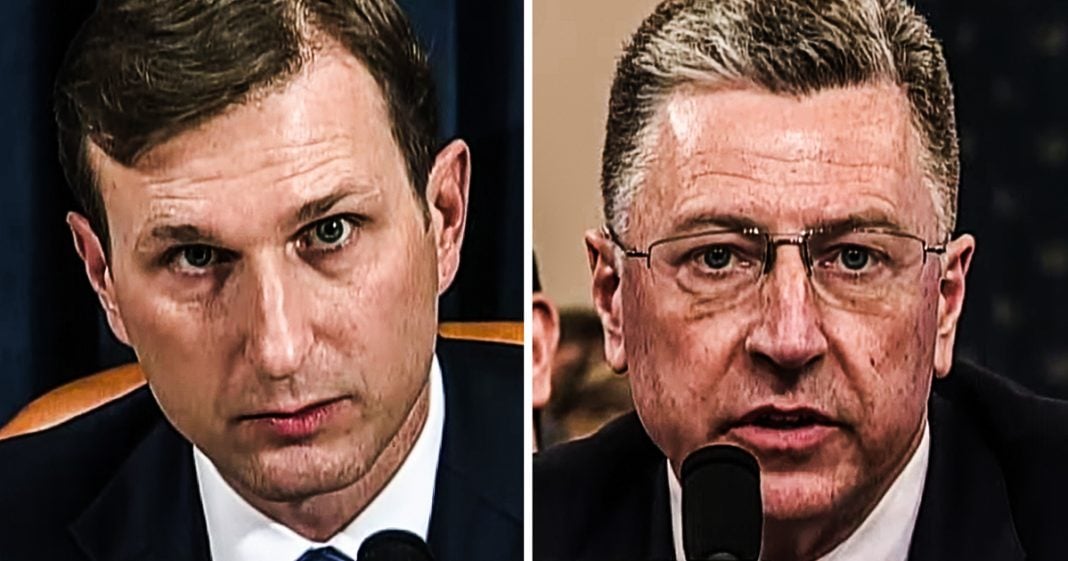 Republicans in the House believed that they had a slam dunk by calling Ukraine special envoy Kurt Volker to testify in the impeachment hearings, but all Volker did was confirm that the President was withholding aide from Ukraine on the condition that they investigate Joe and Hunter Biden. This was the worst day yet for Trump and the Republicans, as Ring of Fire’s Farron Cousins explains.

*This transcript was generated by a third-party transcription software company, so please excuse any typos.
So today’s impeachment hearing started off with a bombshell with Gordon Sunland, but before we talk about today, we’ve got to look back at what happened yesterday and what happened yesterday is that Republicans in the house of representatives fell flat on their face with their star witness. Kurt Volker. Now, they had assumed that calling mr Volcker, who by the way, the Republicans are the ones who called him. They thought he was going to be their star witness. He was their slam dunk. He was their Playmaker. He was the one who was going to put all this to rest and show that it was nothing more than a big old witch hunt. And the reason they believe that is because during the closed door depositions that they had before the public hearings, Volcker did say, Hey, there was no quid pro quo. There was nothing like that. Nobody was talking about the Bidens. Everybody was just doing their business like they were supposed to. This whole thing is rather silly and Republicans thought that mr Volcker was going to come into Congress yesterday and basically say the same thing, but unfortunately for them, he didn’t. Volcker changed his testimony because suddenly after hearing everybody else testify that there was in fact a quid pro quo, mr Volcker decided to say that, Hey, guess what? I was wrong and here’s how Volcker basically explained it. Now he doesn’t want to say that he lied during his deposition, so instead he’s saying, I guess I misunderstood. I guess I misread the room when I was working as the Envoy to Ukraine. See, I thought Volcker said everything was just kind of cool and hunky Dory and we were withholding some aid. I never really asked why didn’t really think I needed to. That wasn’t my responsibility. It wasn’t my concern. We’re withholding aid. Sure, fine, whatever. I know John Bolton didn’t agree with it, he said, but I know other people did and I never bothered to find out why. Fair enough. But then Volcker continued and now I know why. Now I know why this was going on and it is because of the quid pro quo, the extortion, they were withholding aid. Mr Volcker says, because they wanted Ukrainian president Zelinsky to go on television and announced that they were going to investigate Joe and Hunter Biden. That was the quid pro quo. That is what mr Volcker, the Republican’s own witness said on Tuesday. Volcker was not the only one though who explicitly said that. Yeah, there was a quid pro quo. You also had Tim Morrison, the former national security council, Russia director who had this to say.
[And, um, what did ambassador Sonland say did tell you that he told mr Yamak that the Ukrainians would have to have the prosecutor general, um, uh, make a statement, uh, with respect to the investigations as a condition of having the aid lifted.]
So to sum things up, yeah, yesterday was a very bad day for Republicans. However, that didn’t stop Donald Trump yesterday afternoon when he decided to tweet out that it was a great day for Republicans, which leads me to believe that maybe he didn’t watch the whole thing. Maybe he didn’t read any analysis because by any stretch of the imagination, yesterday was an awful day for the Republicans and for the president of the United States and given Gordon Sutherland’s opening statement this morning, I’m willing to bet that today is going to be even worse for him.