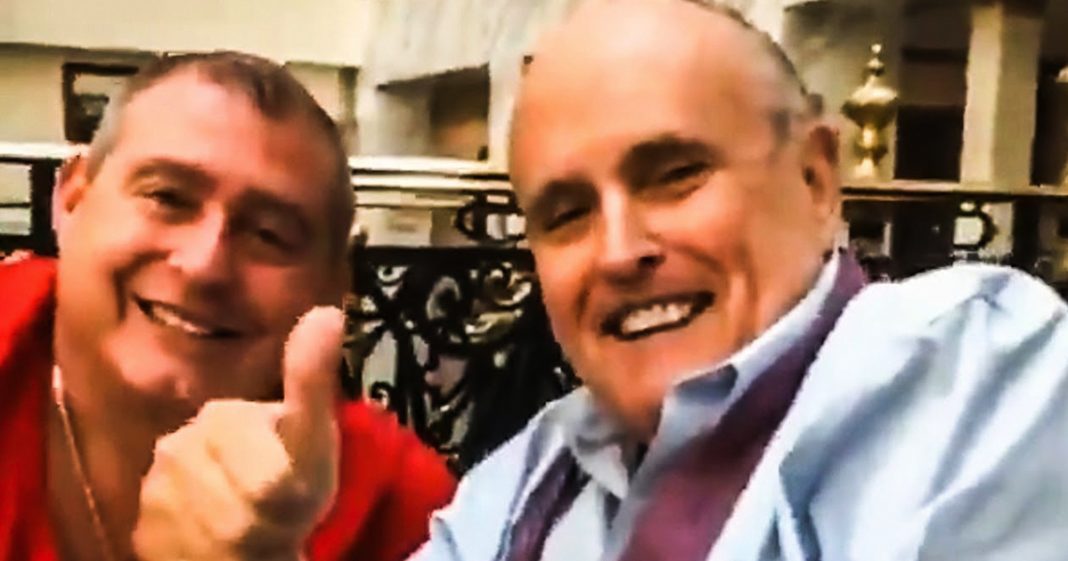 Lev Parnas, one of two indicted Ukrainians who worked with Rudy Giuliani, reportedly told his friends that Donald Trump personally sent him on a “secret mission” to persuade the Ukrainians to investigate Joe and Hunter Biden. This story is on par with what we’ve heard so far in the impeachment inquiry, but Parnas’ story could bear more weight as he continues to work with prosecutors to avoid a lengthy prison sentence. Ring of Fire’s Farron Cousins discusses this.

*This transcript was generated by a third-party transcription software company, so please excuse any typos.
Love Parness. One of the indicted Ukrainian, uh, associates, I guess we could call them, of Rudy Giuliani, allegedly told his friends not that long ago, within the last year that he had been sent along with his other indicted buddy Igor Fruman. They had been sent on a secret mission by Donald Trump to go to the Ukraine and dig up some dirt on Joe Biden. That is according to two different associates of mr Parness who have now come forward and said yes. Lev was out there bragging saying that he was on this James Bond like mission from who he called the big guy to go to the Ukraine and dig up all this dirt on Joe Biden. Now here is an excerpt from Igor Dariush on salon.com and I have to read this because it’s so phenomenal. Um, this actually took place at a Hanukkah party, uh, last year at the white house. And here’s what he has to say during the party Parness and Fruman slipped out for a private meeting with Trump and Giuliani. Two acquaintances who Parnass confided in, told CNN Parness allegedly told us confidence that the meeting after the meeting, that the big guy, which is how he purportedly referred to the president, had assigned him and threw him in a secret mission to pressure Ukraine into investigating Biden and his son, Hunter Parness and Fruman were OLED or reportedly assigned to be Giuliani’s operatives on the ground in Ukraine. Parness allegedly described it to at least one associate as a sort of James Bond mission. And then you have a Joseph Bondy who is one of Parness attorneys who told CNN, mr Parness at all times believed that he was acting only on behalf of the president, as directed by his personal attorney, Rudy Giuliani, and never on behalf of any Ukrainian officials. That’s an important statement from the attorney. And here’s why Republicans, as this thing comes forward, are going to try to say that no, mr Parness, mr Fruman, they are in fact Ukrainian operatives working for the Ukrainian government. So getting this out here now from his own attorney saying he never thought he was working for Ukraine, always thought he was working directly for Donald Trump. That’s a big deal. You get that statement out there now before the Republican attacks begin. It also shows that I think we’re going to see quite a bit of cooperation for mr Parness, possibly for Mr. Fruman. I mean if he is able to come forward and corroborate Parness his story, then yeah, this is bad news for Donald Trump and for Rudy Giuliani. His lawyer has already said that he is willing to cooperate with this impeachment inquiry and we have already had some explosive testimony so far. Sonland, Volcker, Morrison, um, Ivanavich, all of them. Great testimonies. This guy Parness and his buddy Fruman working for Giuliani through or for Donald Trump through Giuliani for Donald Trump. Really yeah I think their testimony is probably going to be the best that we can get. And another thing is that these guys are looking at some pretty serious jail time, right? I mean, they funneled $325,000 from foreign countries to Republican elections here in the United States. That’s going to carry a pretty heavy prison sentence. So if they want to get that sentence reduced and possibly avoid being deported from this country, then I think they’re going to play ball and I think they’re going to spill every dirty little secret that they have to spill.