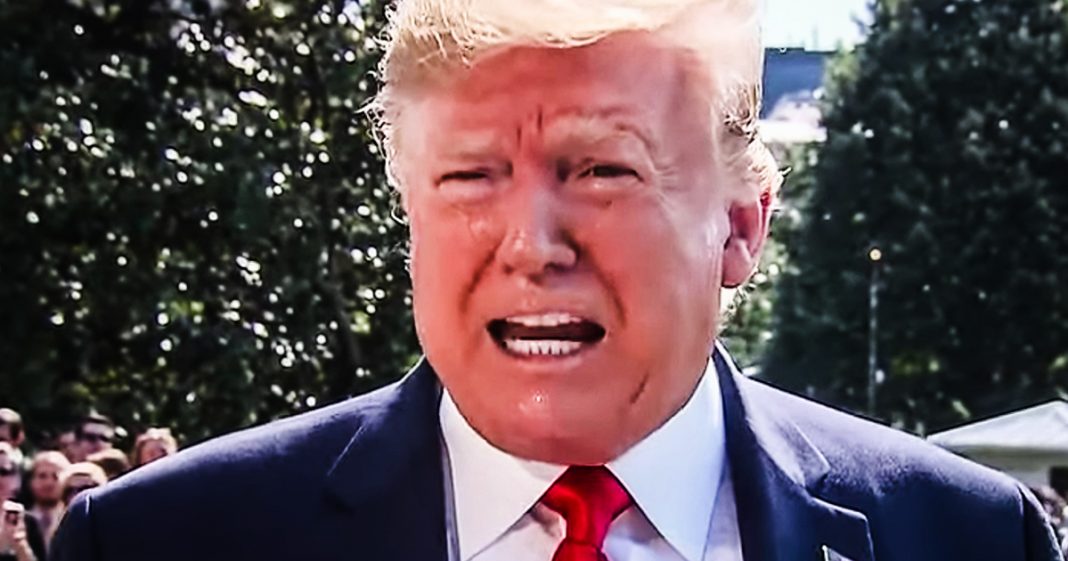 On Monday, Donald Trump took to Twitter to once again attack the impeachment proceedings as illegitimate, but he also said that he might go and testify anyway just to get the whole thing over with. He teased us with the same idea during the Mueller investigation, and this one will likely end the same way. There’s no way the President is going to testify, and Ring of Fire’s Farron Cousins explains why.

*This transcript was generated by a third-party transcription software company, so please excuse any typos.
Yesterday. Donald Trump suggested that he might actually be open to and is actively considering showing up, taking the Democrats up on their offer and testifying in the ongoing impeachment hearings. Here is what Donald Trump had to tweet on Monday. Are crazy. Do nothing. Where’s USMCA infrastructure, lower drug pricing and much more speaker of the house. Nervous Nancy Pelosi who is petrified by her radical left knowing she will soon be gone. They in fake news media are her boss suggested on Sundays deface the nation that I testify about the phony impeachment which hunt. She also said I could do it in writing even though I did nothing wrong and don’t like giving credibility to this D a no due process hoax. I like the idea and will in order to get Congress focused again, strongly consider it, strongly consider it, which is pretty much the exact same thing he said about testifying for Robert Mueller. Immediately is just out for months and months and months. Maybe I’m going to do it. I would love to sit down with them. It’s all a witch hunt and I would love to clear my name and move on. And that’s quite literally the same thing he’s saying right now. Just changing up a couple words here and there. Here’s the truth. Donald Trump is not going to testify before Congress. And here’s why. Even if he did nothing wrong, which he did, but let’s just say for a second. He did absolutely nothing wrong. And he goes and he gets sworn in under oath to testify before Congress, before he walks out of that room. Even if he had done nothing wrong and all of this was fabricated against him, he will have left that room committing at least one instance of perjury because that’s what he does. He lies all the time. He cannot help himself even about stupid things that he doesn’t need to lie about. He’s going to do it. And the Democrats know that Fox News had said that back when he was tempted to testify for Mueller. They said, no, don’t do it. Cause you do lie a lot and they’re going to catch you and they’re going to trap you because they didn’t say this but it was implied. They are smarter than you. And as to the do nothing Democrat part. Where’s all these things he’s asked for? They’re sitting on Mitch McConnell’s desk. Donald Democrats in the house of representatives have passed several hundred pieces of legislation that are sitting over there in the Senate just waiting for Mitch McConnell to do something, but he won’t do it. So it’s really the do nothing. Republicans in the Senate who are blocking every single thing that needs to be done to help this country. Democrats are capable of doing multiple things at once. They’re doing both impeachment and they’re still passing legislation. They’re still proposing new legislation, they’re still writing new legislation. The Republicans over in the Senate and the Republicans in the house aren’t doing any of that. They’re sitting there trying to get on TV as often as possible to lie on behalf of the president and to try to attack Adam Schiff and Nancy Pelosi. And I am no fan of either of those two people, but they haven’t done anything wrong. They’re very corporate Democrats, which is obnoxious and annoying and preventing real progress from happening. But in terms of breaking the rules or breaking the laws, yes, shift and Pelosi haven’t done any of that, but Republicans want us to think they have so that we stop focusing so much on the president’s crimes. Donald Trump will never willingly go and testify before these committees because he knows if he does, he’s going to get popped with perjury on top of all of the other charges coming his way.