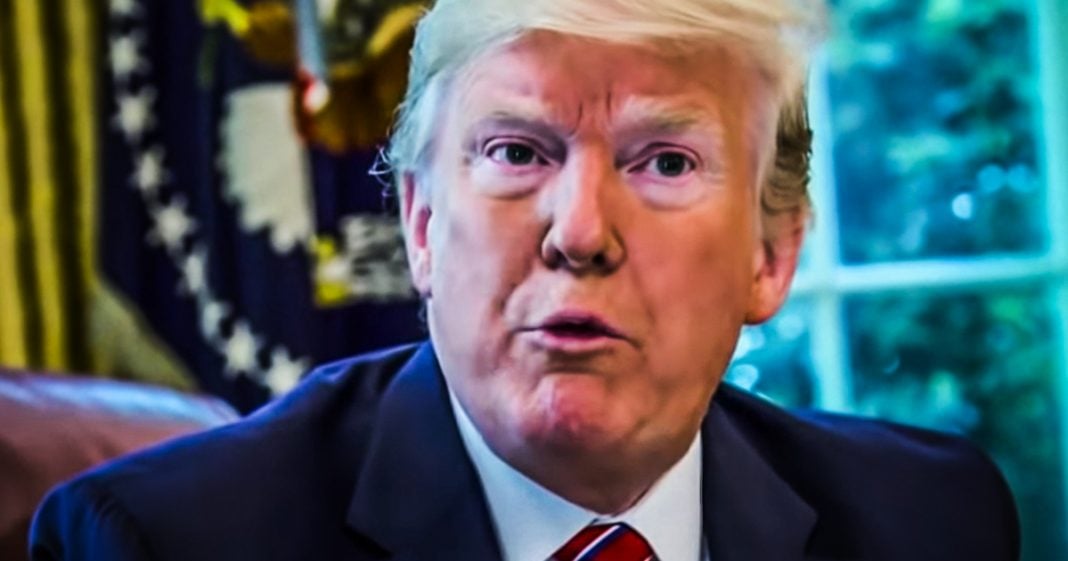 The Supreme Court issued a stay on a lower court ruling on Monday that will prevent Donald Trump from having to turn over his financial records to House Democrats by Wednesday. The stay is going to be in place until the judges on the Court can decide if they are going to take the case, and if they decide to do so, it will likely remain in effect until their ruling on the matter. Ring of Fire’s Farron Cousins explains what’s happening.

*This transcript was generated by a third-party transcription software company, so please excuse any typos.
Yesterday, Supreme court, chief justice John Roberts announced that they were issuing a temporary stay in the lower courts decision from a week ago that would have allowed Democrats in the house of representatives to get their hands on eight years of Donald Trump’s tax returns. This coming Wednesday, John Roberts came out and said, Nope, we’re issuing this stay. It’s just temporary and the stay is being issued while we decide what to do with the case. Now that means John Roberts and the other justices on the court have not yet decided if they’re even going to take the case. But obviously if the tax returns get released before they even make that decision, then their decision at that point no longer matters. So this was expected. This is, you know, nothing to lose any sleep over here. This is John Roberts saying, Hey, we’ve got a lot on our plate. We can’t make a decision right now. We have to discuss it, but we can’t say, yeah, you can go ahead and have them first. So we’re issuing the stay. Again, nothing wrong with that. This doesn’t mean the Democrats have lost or that Trump has won. It just means as for right now you’re not going to get your hands on these things. So here’s the thing and we have talked about this issue a lot, but I want to talk about something new with it that we have not yet discussed. Now we have in the past talked about Donald Trump and his attorney’s horrible legal arguments. But here’s the thing, when you’re appealing, you can’t necessarily change the grounds for your lawsuit, which is what Donald Trump’s lawyers would like to be able to do right now, but unfortunately they can’t. The whole basis of the lawsuit they filed to stop the release of these tax returns has two tiers. One is that this is not related to any particular legislation that these Democrats are working on. That one falls flat because it doesn’t have to be related to a legislation. If it is related to investigations, which investigations are happening. Michael Cohen said Trump committed bank fraud. They want the tax returns so they can verify that they have very clear grounds to request these documents. But the second argument is even worse, and this is the argument that’s going to give the Supreme court a very hard time if they want to defend the president, and that is that the president’s immune from investigation. They’ve argued that several different sets of Donald Trump lawyers have made that argument in different courts in different jurisdictions and every single time they’ve been shot down. Now, in order to appeal that, the Supreme court would have to go and look at that legal argument and say, Nope, they’re right. Donald Trump, the president of the United States, the office is actually immune from investigation. This Supreme court, no matter how conservative, they are not going to do that. They’re absolutely not going to do that because I know a lot of Trump supporters think, Oh, he put two of them on there. They’re going to protect him. They might, but I don’t think you’re going to get every conservative on that bench to give blanket immunity to the office of the president of the United States because they understand just the same as the rest of us do. That office will eventually go back to a Democrat. Maybe it’ll happen in the next 15 months. Maybe it will happen in the next five years, nine years, whatever it is. Eventually a Democrat’s going to hold that office again and that immunity, if the Supreme court grants it is going to still be there and that’s going to be awful for conservatives, isn’t it? It’s going to be awful for the country. Be honest here. This isn’t actually a partisan issue. We cannot have anyone in this country who is above the law, whether they’re president or whether they’re anyone else. And even as conservative as the Supreme court is, I think it is very far fetched for them to give any single human being that kind of immunity because they understand the longterm ramifications of that. Gorsuch likely doesn’t understand it. Kavenaugh definitely doesn’t understand it, but I think most of the rest of them do. And that is why I think once the court decides whether or not they’re taking the case, it’s pretty much going to be the end of it. Cause I don’t see them taking this for fear of looking like they’re siding against the president. They’re going to examine the rulings. They’re going to examine the arguments, and once they do that to keep their own hands clean, they’re going to say, we’re not going to listen to this case because we can’t find anything in the arguments that warrants looking at again.