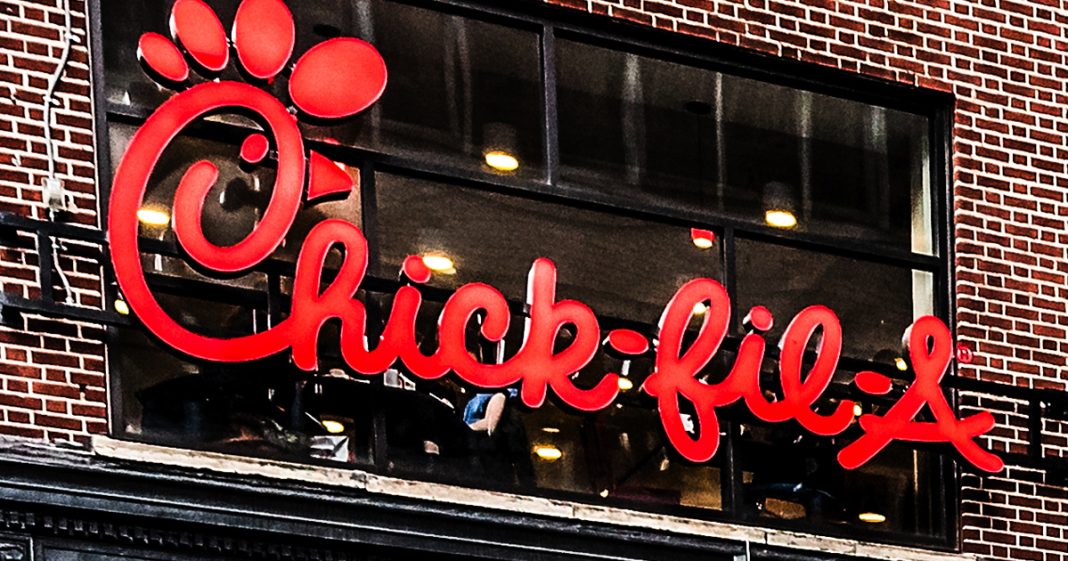 Chick-Fil-A has decided that they are no longer going to fund causes that are discriminatory towards the LGBTQ community, and instead they are going to focus on helping the needy, the hungry, and the other groups that their religion tells us that we need to help. This decision sent conservatives into an absolute tailspin, with Mike Huckabee, Ben Shapiro, Dave Rubin, and plenty of others crying that their chicken won’t be filled with hate anymore. Ring of Fire’s Farron Cousins explains what’s happening.

*This transcript was generated by a third-party transcription software company, so please excuse any typos.
Yesterday, fast food chain Chick-fil-A, they announced that their Chick-Filet foundation is no longer going to be giving money to groups who’s basically their main goal is to attack the LGBTQ community. Now, this has been something that has plagued Chick-fil-A for a very long time, years and years and years. Ever since it was revealed that they’re basically paying lots of money to these groups who go out there and tell us that gay people are horrible people. Well, yesterday, Chick-fil-A said, you know what? We’re not going to do that anymore. Instead, we’re going to use our money for things like improving education, fighting hunger, and fighting homelessness. That seems like a good shift, right? This seems like a company trying to do the responsible thing, saying, Hey, we’re, we’re sorry. We’ve been funding hate for so long. We’re not gonna do that. Instead, we claim to be Christian, so we’re actually going to do Christian like things who could object to that, right? The answer is quite literally every single Republican out there, former Arkansas governor, Mike Huckabee, Dave Ruben, Ben Shapiro, all of them and many, many more took to Twitter to express their outrage over the fact that Chick-fil-A decided, Hey, we’re actually going to start helping other human beings. Mike Huckabee tweeted the following in August, 2012 I coordinated a national Chick-fil-A appreciation day after they were being bullied by militant hate groups. Millions showed up today. Chick-fil-A betrayed loyal customers for money. I regret believing they would stay true to convictions of founder Truet Cathy sad. They betrayed people by no longer funding hate. I mean Jesus Huckabee. What does that say about you and all your followers? Well, to be honest, it doesn’t say anything that we all didn’t already know. You hate monger then you have Ben Shapiro who had, uh, two tweets cause he couldn’t fit it all into one cause he was so mad at Chick-fil-A. He said the following, he said, Chick-fil-A has survived and thrive because they served everyone and refuse to cater to the cancel culture. Now they’ve caved at the behest of the censorious left. This is a terrible move and just the latest indicator that the center cannot hold a country in which we only eat at restaurants where we agree with the owner’s politics when the owner’s politics does not affect anything happening inside the restaurant is a country that cannot survive as a unified entity. Will Holy crap there, Ben, you’re telling me that the entire fabric of the United States is made up on the backs of fast food chains. Jesus Christ. Man, it’s not apartheid. It’s fast food. Chicken. That’s not gonna pay for hate anymore. Dave Rubin said the following. He said the decision makes absolutely no sense. Chick-fil-A was actually cool because it stood up to the progressive mind virus, which is cancel culture. I’m not going back to that sad, dry, pathetic burger King chicken sandwich. No way. No. How back to the home cooked frying pan. Dave Ruben, who actually, even though he’s a conservative, should be glad they’re not funding hate because he is openly gay, is so mad, but he refuses to go to burger King because I guess where Dave lives, they only have a Chick-fil-A and a burger King. So instead he’s going to start cooking more at home, which is great, Dave. That’s wonderful. You should probably be doing that anyway, fast food’s not that great for you. But here’s the thing, folks, can we stop as a country freaking out about fast food chicken for a week? Honest to God, that’s all I want right now. Seven straight days where there’s not some kind of freak out over fast food, chicken. I, we got people getting beat up at Popeye’s, chickens over there, chicken sandwich, Chick-Fil-A funding hate. Now they’re not funding hate. So they’re getting hate for not funding hate from the right. It’s fast food people. It’s fast food. It’s not even that great. So maybe maybe put your chicken sandwich down for a while and focus on the stuff going on in this country that actually matters.