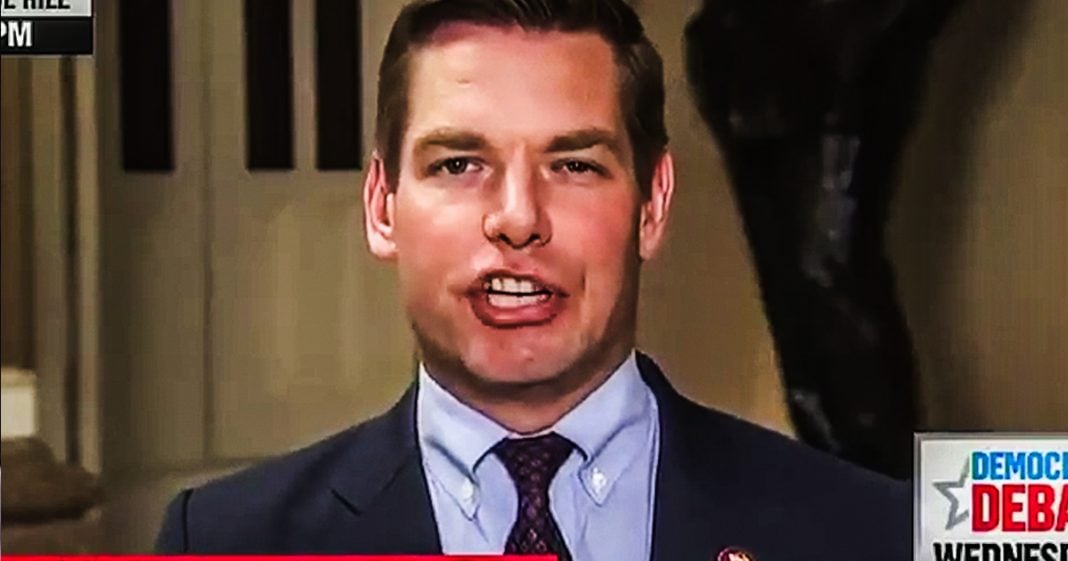 Former Democratic Presidential Candidate Eric Swalwell appeared to let a major fart rip on national television. This was during an appearance on Chris Matthews’ show Hardball on MSNBC. The internet immediately erupted, labeling the incident #FartGate, with both Matthews and Swalwell denying that it was actually a fart. Ring of Fire’s Farron Cousins discusses the absurdity of it all.

*This transcript was generated by a third-party transcription software company, so please excuse any typos.
Well folks, it was the fart heard round the world. Everybody by now has probably seen the clip of a democratic representative. Eric Swalwell on MSNBC is hardball and we’ve all heard what happened for those who haven’t. Here it is.
[taxpayer dollars to ask the Ukrainians to help them cheat in election. And the complaint that I’ve heard from the public,].
okay, so it sounds pretty obvious as to what that noise is. In fact, the internet basically erupted immediately after this and uh, the hashtag fart gate became the top trending thing yesterday evening. Now hardball has already put out a tweet saying, sorry to disappoint everybody, but that was actually just a hardball mug sliding across a table and you can get yours here. So they’re already trying to cash in on it by selling more mugs. Cause that’s what corporate media does. They want more money. I take issue with that and I don’t believe that particular excuse. And here’s why. Nobody on that staff would be sliding a mug across the table while they’re on the air. They would immediately be fired. They know better than to do that or to do anything that’s going to make a sound. Chris Matthews, same thing. Guy’s been on TV for what like 90 years. He knows to not slide a mug across the table. Now, another excuse that’s been floating around is that, Oh, it was just a cell phone sitting on the table that vibrated. Now that one actually makes a little sense if you ignore the fact that again, the producers over at MSNBC and Chris Matthews himself would not have allowed that to happen on their end and Swalwell like most well to do. People who go on television is likely smart enough to not put his own cell phone on the table and if he’s not, then I’m sure all of his handlers or the people out there filming him would have told him that or told him to put it on silent. I’ve been in these TV studios a lot over the last 15 years. They don’t make stupid simple mistakes like that. They simply don’t, and that’s why I don’t believe that excuse either. Swalwell at the time, denied it. So we don’t know if he supplied it, but he definitely denied it and he said, Hey, yo, no, sorry. That wasn’t me. He didn’t say, Oh, sorry. That was my cell phone. Hardball didn’t immediately come out and say, Oh, sorry, I moved a cup across the table. Folks don’t overreact to that know. These were all excuses that came up after the fact. The big question is, does any of this matter at all? Absolutely not. But every now and then it’s kind of fun to talk about something silly and stupid because let’s face it, everything happening in DC right now does seem to be a little bit silly and stupid, but it’s nice to talk about silly things that don’t also involve the president committing massive crimes.