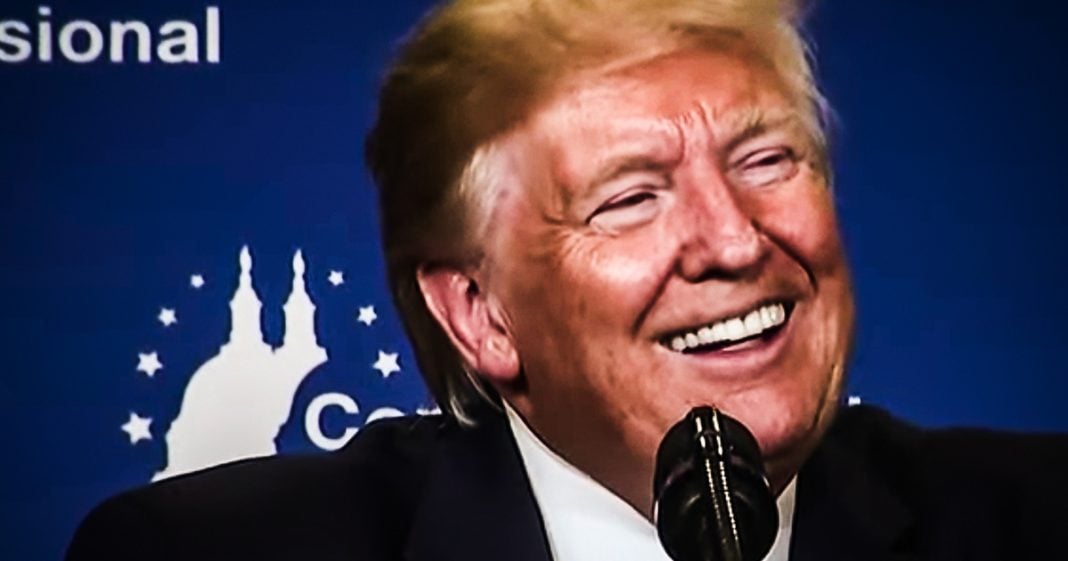 The Trump Organization is looking for new investors for Trump’s DC Hotel, and according to a copy of the sales brochure obtained by CNN, the company is actually bragging about how many foreign officials use the hotel on a regular basis. This is exactly what Trump is being sued for by several organizations, and now they are actively using this violation of the Emoluments Clause as a sales pitch. Ring of Fire’s Farron Cousins explains how this will backfire on Trump, and give plenty more ammo to the lawsuits against him.

*This transcript was generated by a third-party transcription software company, so please excuse any typos.
Donald Trump is trying to sell his Washington DC Trump hotel. Even though it’s only been open at this point for just a few days over three years, they don’t want to do it anymore. It’s a little too expensive and so Donald Trump and his Trump organization have put together a glossy, beautiful brochure that CNN got their hands on and the brochures purpose is to go out there and convince investors that this Trump DC hotel is going to be a huge money maker for them. After of course, they rip Donald Trump’s name off the building and believe it or not that that’s actually in there, but what’s really interesting in there in this little brochure they’ve put together against CNN got their hands on it, is that the Trump organization is actually bragging about one of the very things that Donald Trump is being sued for, which is his nonstop violations of the emoluments clause of the U S constitution. Here is what the brochure had to say about that. There is tremendous upside potential exists for a new owner to fully capitalize on government related business upon rebranding of the asset, rebranding of the asset. So there’s two awesome things to talk about right there, right? Huge potential for government business coming in and out of this hotel. They even admit in there that, Hey, you know we have to turn some of these government groups away, these foreign officials away cause you know we don’t want to violate the emoluments clause and we’re losing about 9 million a year from turning them away. That’s 9 million that you wouldn’t have to turn away. You can put it in your pocket. Of course that’s also not true because they’re not actually turning forward officials away as we have repeatedly said because reports have proven government officials from other countries are actually buying blocks of rooms at Trump’s hotels paying for them and never using them. They’re doing it as a way to essentially launder money to the president. That’s one of the reasons he’s being sued for this by several different organizations, lawsuits that were recently re revived in court. And also one of the reasons he likes likely wants to get rid of this hotel. But so there’s that day they’re bragging about the fact that Hey, we got lots of foreign officials that come in and out of these hotels all the time. They spend lots of money, but we’re not taking any of that money. We’re totally not. You are. And then the second part of that sentence, upon rebranding of the asset, which is what I was talking about, as soon as you rip Trump’s name off there, you know, get it out of everything. Make sure nobody can see where the letters were on the sign, then yeah, you’re totally gonna make a ton of money once it doesn’t say Trump anymore. Now here’s what I am thinking. If I’m one of these groups that’s filed a lawsuit against Donald Trump for his nonstop violations of the emoluments clause, you know what I’m doing now? I am issuing a request for documents that includes this brochure and then I’m going to take that brochure, that little sentence I just read about all the government business that comes and goes through here and how much money they make off of it. And I’m going to go ahead and submit that into evidence because this is their own words and it’s their own words that quite literally prove your case already. Like that’s it. Game over bud. You’re done. You’re done. Because the documents tell the story just like an every single major lawsuit in this country that plaintiff, lawyers triumphing, they don’t have to go up there and tell the story. They let the documents from the company itself tell the story and this is just a brochure and if CNN got their hands on it, I’m sure they’d be willing to lend you their copy. So why not just go ask politely? Because if there’s one thing we know CNN does also hate Donald Trump and would be more than willing to do whatever it takes to take him down. So do you. Why don’t you just ask if you could borrow that brochure for a few months, submitted into evidence and get this case may be wrapped up before Valentine’s day, if that’s possible. I don’t know. I’m just guessing here, but nonetheless, this brochure is very bad for the Trump organization because not only does it prove that, yeah, they’re violating the emoluments clause, but two, that they know that Donald Trump’s name itself is toxic to have on the side of a building. Now, that part doesn’t bode very well for Donald Trump’s post-presidency plans and fortune does it.