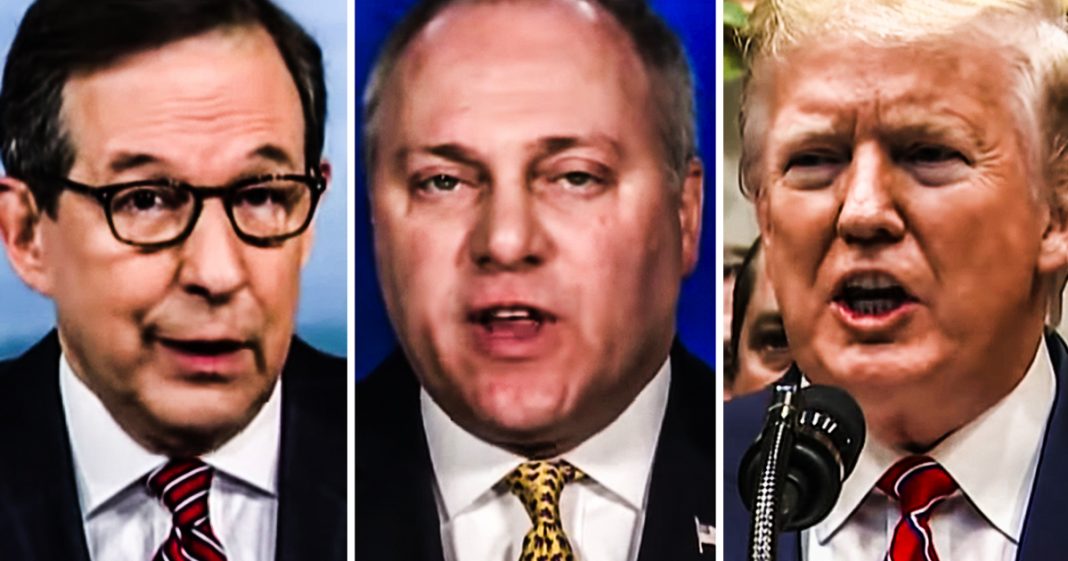 Donald Trump unloaded on Fox News host Chris Wallace on Sunday after Wallace gently correctly Representative Steve Scalise about a small, but important, detail about the witnesses being called during the impeachment. Scalise tried to claim that these were “Adam Schiff’s people,” and Wallace politely told him they were career officials working for Donald Trump, and that sent Trump over the edge. Ring of Fire’s Farron Cousins explains what happened.

*This transcript was generated by a third-party transcription software company, so please excuse any typos.
On Sunday morning. Fox news host Chris Wallace had Republican representative Steve scalies on the program to talk about the impeachment hearings of the past week and Steve scalies tried to claim that these people that Adam Schiff was bringing in were all Adam shifts people, to which Chris Wallace said, well, hold up man. These are actually a career officials who worked under Donald Trump. These are not Adam Schiffs friends. He’s not parading in his buddies. These are actual people who worked for Donald Trump and it was that little correction which Chris Wallace did rather politely actually that set Donald Trump over the edge. Here is what Trump tweeted in response to Chris Wallace is very mild correction of Steve scalies. Here it is. Steve scalies blew the nasty and obnoxious Chris Wallace, will never be as father Mike, away on Chris’s lowest rated, unless I’m on, morning show. This kind of dumb and unfair interview would never have happened in the Fox news past. Great job Steve. All Chris Wallace did was correct him about who these people were. Like you, you absolutely lost your damn mind because Chris Wallace said, we’ll hold up the, these aren’t Adam shifts witnesses. These are officials who worked for Donald Trump, and that statement was enough to absolutely blow Donald Trump’s mind. He wasn’t expecting it. And let’s be honest here, Chris Wallace is certainly not a Democrat. He is not a member of the hashtag resistance. He is a Republican who works for Fox news, who occasionally gets something right, much like Shepard Smith. When it came down to the wire, Shepard Smith was a good and faithful Fox news Republican, as is Chris Wallace. The only difference is occasionally they can’t hide their contempt for the truth and they let some truth come out and that’s what happened on Sunday, right? Chris Wallace does not deserve a medal or really any praise for what he did because he didn’t go above and beyond. He simply told the truth for a few seconds, but those few seconds were enough to absolutely set Donald Trump off. And here’s why. Trump is losing the narrative battle here. The Republicans are losing the narrative battle in terms of what’s happening with the impeachment inquiry. They keep trying to tell us that these are Adam Schiffs, witnesses. These are Adam Schiffs people. Adam Schiff knows who the whistleblower is, but he won’t tell anybody. This is Adam Schiffs, Adam Schiff, Adam Schiff, Adam Schiff, Adam Schiff. Meanwhile the rest of the public’s like, no, actually these people are telling us exactly what Donald Trump did. And you complain saying, Oh, it’s all hearsay. So okay. Then we got testimony from people who heard it firsthand, witnesses firsthand testimony that’s come out of the closed door hearings. Every Republican talking point about the impeachment hearing has absolutely blown up in their faces and been proven to be false. So that’s why this little line from Chris Wallace was enough to absolutely push Donald Trump over the edge. And to be honest, dude needs to be a little bit careful after all. He did have that abrupt and very odd visit to Walter Reed hospital this weekend for what he claims was part one of his physical part two’s coming next year. You know, kinda like one of those movies. I go part one then part two is six-. Yeah. That’s not how physicals work, but that’s the official talking point from the white house. So regardless, buddy, seems like there’s probably something wrong with you. Maybe it’s heart-related, maybe it’s blood pressure, but whatever it is, you need to find a way to calm yourself down before your tweet, your tweet yourself right into a stroke, because that’s probably where you’re headed. It’s just one interview with one guy on Fox news and you absolutely let it ruin your entire Sunday. Take a break, bud, relax and maybe try to meet with some of your Republican people and come up with some impeachment talking points that aren’t going to be proven false five minutes after they’re delivered.