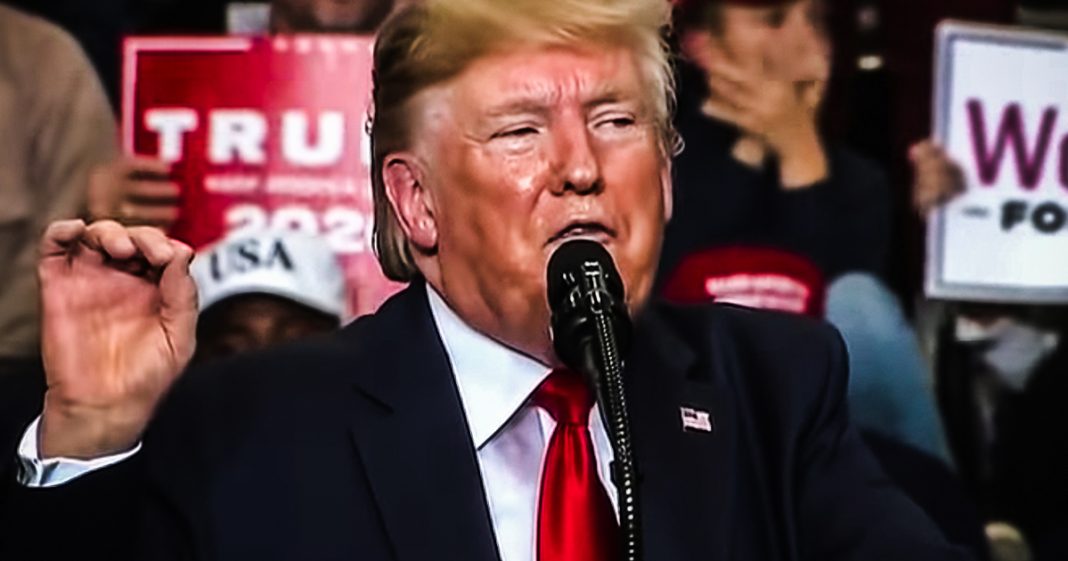 Donald Trump thinks that he can buy his way to a second term in office by promising Middle Class Americans a tax cut before the 2020 election. But this promise is actually more of an admission that his first round of tax cuts didn’t help us at all, a reversal from his insistence that we’re all benefiting from his policy. Ring of Fire’s Farron Cousins explains what’s happening.

*This transcript was generated by a third-party transcription software company, so please excuse any typos.
Donald Trump has basically gone through his entire life by buying whatever he wanted. You know, whether it was his daddy buying him his way out of Vietnam, whether it was, you know, buying his wives loyalty, buying the white house, and now he thinks he can buy a second term in the white house by giving the middle class a tax break. According to a report in the Washington post, Donald Trump’s closest aides, along with his economic advisor, Larry Kudlow, are trying to work out a plan to put a middle class tax cut in place, reducing our taxes from roughly 24% down to 15% before the 2020 presidential election. And they’re doing it for the sole purpose of ensuring a second term for Donald Trump. Essentially, they’re trying to bribe us, put a little bit more money in your pocket and Hey, don’t you forget where that money came from, right? Score a sport. There you go. Go along the voting booth. Vote for Trump. Now here’s the thing. This plan now that it’s been revealed has already backfired on the Republicans because all it’s done is proven that your first tax cut didn’t actually help the middle class. Y’all didn’t think of that did yeah? When you’re out there saying, Hey, why don’t we cut taxes for the middle class and maybe they’ll come vote for you. You should have had somebody in your ear say, Hey, we already told them we did that. Remember, remember the end of 2017 that highly contentious of Republican tax cut and jobs act, we, we told them they were going to get $9,000 a year off that, which they did tell us that and now they’re saying, Whoa, okay. I guess it didn’t work. I guess the jigs up, but Hey, if you want a tax cut, you gotta give Trump a second term because that’s what we’ll work on. Now we’re totally serious about cutting your taxes. I know we told you we already did, or we would or and all that, but Hey, you can totally believe us this time, right? Well, the answer is no, and to be perfectly honest with you, that 9% reduction in our taxes, if you make $100,000 a year, you’re only saving $9,000 a year, which is less than a thousand dollars a month. Hell, Andrew Yang wants to give us more than that, right? And those of us making half that would only get about half that And most people in this tax bracket also understand like this really isn’t that much. It’s not enough to make that big of a difference in my life. And more importantly, it’s definitely not enough to make me want to give Donald Trump another four years. See, here’s the thing, Republicans don’t understand. The main group of people in this country bitching about taxes are the people at the top. Yeah, you hear you’re average. You know, work a day person saying, Dang government taken all my money, but at the end of the day, they don’t even know what their actual tax rate is. They just hear this talking point and they just repeat it. But if you were to ask them if they pay too much, too little or just right in taxes out of their paycheck, most of them would actually say, yeah, they pay just right. And they’re not actually angry about the taxes coming out of their paycheck. But Republicans don’t understand that because they don’t listen to average people who say that, Hey, I understand I pay taxes that gives me roads and bridges and schools and police departments and fire departments and all those other things that I need. But the rich people say, Oh heck no. I don’t want to pay more in taxes. I’m sending my kids to private schools. I’ve got my own private jet. You don’t have your own private roads yet though. So you know, that’s, that’s a bit of a bummer for those expensive cars having to drive over those potholes. But nonetheless, the average work-a-day American citizen isn’t out. They’re actually complaining about their taxes they do when they see it on Fox. But in reality, it doesn’t bug them. They don’t think they’re overpaying. But Republicans, if they took five seconds to listen to these people may understand that. But they don’t. They only listen to the wealthy elite, and that’s why they think that they can buy everyone in every thing. Well, guess what, Republicans, the middle class is not now, nor will it ever be for sale.