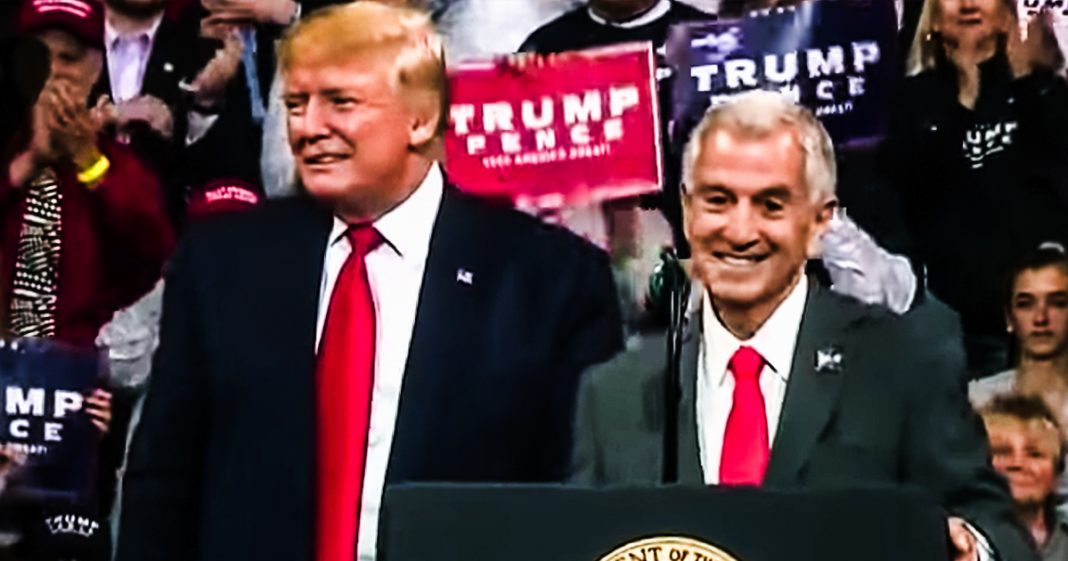 Donald Trump suffered another major blow this past weekend as another Trump-backed Republican lost a tight election to a Democrat in a red state. Republican Eddie Rispone lost the Louisiana governor’s race to the incumbent Democrat in a race that Republicans were sure they’d win. Trump campaigned in the state three times for Rispone, but that didn’t help at all, just like it didn’t help in Kentucky or Virginia. Ring of Fire’s Farron Cousins explains why Trump’s seal of approval is akin to a kiss of death.

*This transcript was generated by a third-party transcription software company, so please excuse any typos.
Donald Trump suffered a another major setback, uh, just a few days ago. And no, I’m not talking about a Murray, Ivana Rich’s testimony and the impeachment inquiry. No, I’m talking about the Louisiana governor’s race where the democratic incumbent beat the Donald Trump endorsed Republican challenger man by the name of Eddie risk bone. Now, Donald Trump had gone down to Louisiana three different times, including one last week, one the week before, and then one prior to that, three times to go campaign for as good buddy Eddie to tell people in Louisiana, go and vote for Eddie. Don’t let this Democrat get a second term as your governor. Democrats are awful. their do nothing people, you know, kind of the same spiel he gave in both Kentucky and Virginia just a few months ago. and just like Virginia, and just like Kentucky, Louisiana had the same results. The Democrat won in a very narrow election that Republicans really honestly should have won three red States, three democratic governors, and three Trump endorsed candidates sent packing. Donald Trump is toxic to Republican politicians right now, even in red States. Right? It’s not like he went to California and endorsed a Republican who had no shot at winning. These were all three Republicans who easily could have and to be honest, probably should have won in the States based on the voter makeup. And they didn’t. And yet Trump endorsed all of them. Trump showed up at rallies for all of them and they failed. Now I’m not pinning 100% of the blame on Donald Trump, but it is fun to point out the fact that he keeps losing. And honestly this is a trend that has continued basically since the day he got sworn in as president. His endorsement means nothing. His support means nothing. and it certainly overall is not helping these candidates. It’s kind of like how in 2008 George W. Bush, as he was leaving office, even though there was an election going on, he didn’t go out and do campaign rallies for John McCain. And it’s not only because McCain didn’t want him to, but it’s because they understood the Republican national committee that this guy has a net negative approval rating. Most people do not like him. They’re tired of them, they’re sick of them. They don’t want to see them. And so they just said, Hey, you don’t have to go campaign, which is of course, highly unusual, but that’s what Trump is today. But they can’t tell him that. They don’t want to see him there. They can’t tell him that he can’t go campaign because they’re terrified of him. They weren’t terrified of w, but they’re terrified of Trump. And that’s great because over the next year, we’re going to see him do more of these rallies, go out and endorse more candidates, and hopefully see more results like we just saw a few days ago over in Louisiana.