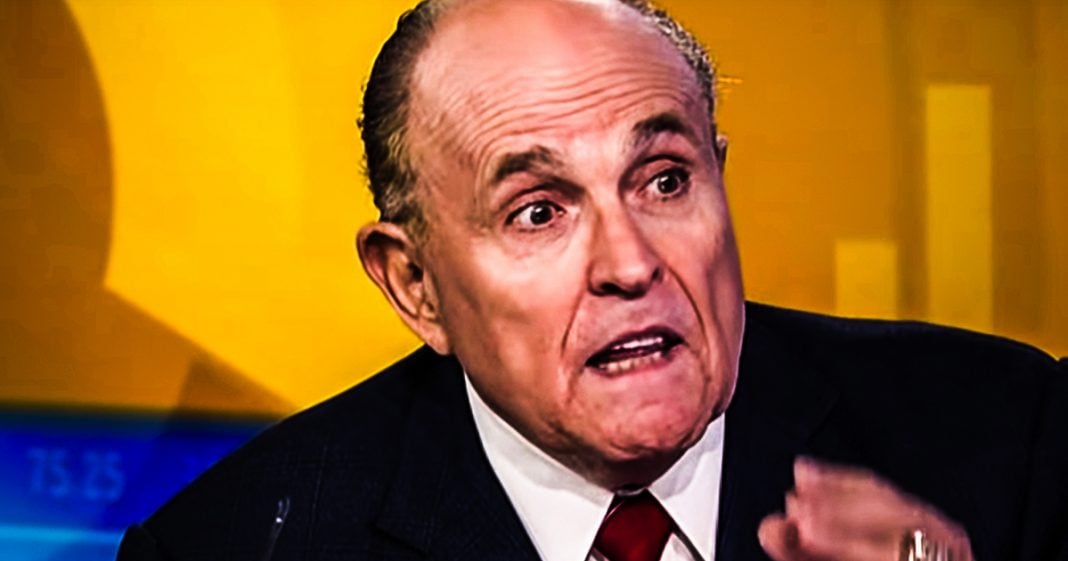 Rudy Giuliani, Donald Trump’s attorney, is now officially under criminal investigation for potential campaign finance violations and failure to register as a foreign agent. This is bad news for Trump, as his lawyer knows all the dirt about the Ukraine scandal and could likely spill the beans in order to get himself out of trouble. Ring of Fire’s Farron Cousins explains what’s happening.

*This transcript was generated by a third-party transcription software company, so please excuse any typos.
Well folks, Rudy Giuliani, Donald Trump’s personal lawyer is now officially under criminal investigation by the Manhattan district attorney’s office, which not ironically is an office that Rudy Giuliani himself used to run. Oh, how the tables have turned, huh Rudy, but that’s what you get for lumping yourself into such a criminal enterprise except for the fact that this isn’t necessarily related to Trump. I mean it is in a way, but at the same time, Giuliani did most of this on his own because this is related to his palling around with those two, uh, people who got arrested, Love Parness and Igor Fruman and they were good friends with Rudy Giuliani. Hell earlier this week, a photo emerged of the three of them, among others literally sitting in a smoke filled room as if this was some kind of noir film where they’re sitting there plotting their crimes while smoking their cigars. That’s what the photo is. It’s nuts. And Giuliani did that all by himself. And then he thought he could use those relationships along with his relationship to Donald Trump. And maybe, I don’t know, do some more crime in, or at least that’s what investigators in Manhattan are trying to get to the bottom of. Did he in fact go and commit crimes? Is there some kind of campaign finance violation that we need to be concerned about? Which is what they’re looking into? Should he have registered as a foreign agent for all of the work he’s doing on behalf of foreign countries here in the United States? That’s another thing they’re looking into. Now, a lot of other officials have said there’s probably huge cybersecurity failures that Rudy Giuliani engaged in or caused, but they said he’s likely to not face any charges on those counts. The other counts on the other hand, the failure to register and the campaign finance violations, that’s going to be pretty easy to figure out and that’s going to be pretty easy to pop him on. So here’s how this plays out as usual. Several different paths that it could go. First path is an indictment against Rudy. Giuliani followed very swiftly, probably by Giuliani’s cooperation in handing over each and every piece of dirty has on Donald Trump, which is going to take down the entire Trump presidency. Depending on what Giuliani has. The second path could be a potential indictment followed by Giuliani not cooperating with anything but eventually probably being convicted because he’s pretty dumb to begin with. I mean, we have seen him literally tweet out evidence against Donald Trump in the last few months. I have no doubt he would do the same thing with himself. The third path and the least likely path is that he doesn’t get indited. No charges are filed. He goes about his day, so all of the two paths that are most likely the two indictment paths that either lead to rolling on the president or sucking it up and dealing with this punishment. What’s gonna happen if that happens is that Republicans are gonna double die- down right now on their claims that Rudy Giuliani was acting alone in, that Trump knew nothing about the whole Ukraine scandal. This was all cooked up by Giuliani. This is how they throw him under the bus because if for some reason he gets charged with a crime in the state of New York, Republicans can then sell that better to the American public. They can go out to them and say, listen, of course it was Giuliani who set all this up and did the illegal things. He did illegal things in New York. He did illegal things here and there and everywhere, and that’s going to take some of the blame off Donald Trump. So technically Giuliani being indicted, if he doesn’t roll on the president is going to be the best thing to happen to Donald Trump because it does give them a little bit of clearance to say, see, Giuliani was corrupt as hell over there. We have no reason to think he wasn’t corrupt over here. I knew nothing about it. I should have had better judgment, which Trump will never say, but either way, the whole thing was Giuliani’s fault and that Rudy is, when you turn over every piece of insurance that you have on Donald Trump, he can’t pardon you for what you’re being accused of up there. In the state of New York. So if you’re gonna flip on him now, might be a good time to do it.