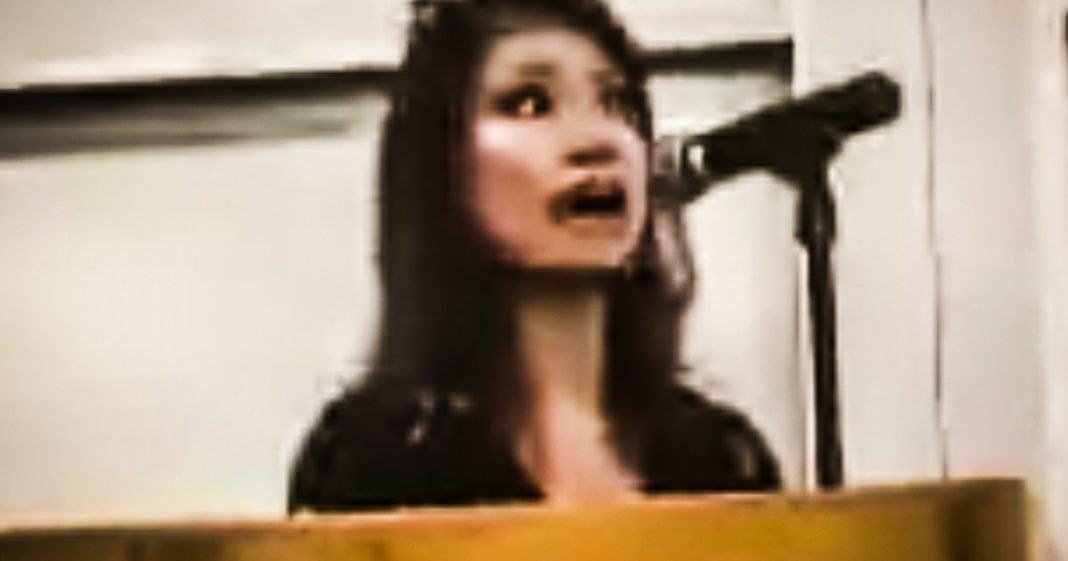 Right wing propagandist Michelle Malkin may as well have been wearing a white hood during a recent speech at a California college, when she began talking about “the great replacement” and warned that this country would become a majority-minority country by the year 2045. Malkin, who is the daughter of immigrants, believes that people who come here are trying to take over, completely ignorant that she wants to stop people from doing what her family did. Ring of Fire’s Farron Cousins explains what’s happening.

*This transcript was generated by a third-party transcription software company, so please excuse any typos.
Long before the right wing had Candace Owens out there spewing their white nationalist stuff from a person of color long before they had Terrance K Williams doing the same thing they had and still have Michelle Malcon, the daughter of immigrants who has been one of the loudest Republican voices supporting white nationalism from a non white person. And recently she gave a speech at a college in California where she doubled down on the fact that white people need to rise up or else bad things are going to happen. Here’s what she had to say.
[We are a country of 325 million. All the projections are there and they don’t come from some right winged could be sourced. It’s pure research center. By 2045 we will be a majority minority nation. We’re losing. And it’s the same trend that you see across the world. I talked about that. So called great replacement theory that all of the uh, open borders and types are trying to scare people away from contemplating. Yeah. Think about it and realize it. Do the math.]
Ah, yes. Michelle, the great replacement, the thing you’ve been talking about for over a decade, all those horrible immigrant people coming to the United States and and I guess just taking over or maybe like your family, they’re coming over here to the land of opportunity to give their kids a better shot, right, to start a family, to become American citizens. They’re not coming over here because they want to change the racial makeup of the United States, not because they want to take over our government, but because they’re just looking for something better. That’s why your parents came here, Michelle and I would say you have taken full advantage of America, the land of opportunity and you’ve used it to your advantage, but unfortunately at the same time you’ve also become a very useful tool for the Republican party because anytime they can take a nonwhite person and get them to go out there and spread these white nationalists talking points, they feel like they’ve won. Just like Terrence Williams does, just like Candace Owens does, but Michelle Malkin has been doing it since those people were still in diapers and she is going to continue doing it because she gets paid a lot of money to do it. She may not be the loudest voice anymore. There was a time when she really was her and Ann Coulter kind of the top two, but younger folks have come along and Michelle has been pushed kind of to these creepy little college speeches, but she’s not going to stop. She’s going to go out there and tell us that, Hey, people that look like me are going to come over here and change your country. You don’t want that, do you? Actually we do. I mean, isn’t that what the United States is like a big giant melting pot, all these people, I mean how was thats how we were even founded, people coming from other countries where they faced oppression. They faced a dictatorial ruler and they said, no, to heck with this. We’re going to go start our own country and we’re going to welcome people in and we’re going to be cool to them, except we weren’t really cool to them, but eventually kind of, we warmed up a bit and we did embrace the other cultures and the other people who came into this country. Yeah, we’ve got a lot of work to do and we have a pretty gross history with it, but we’re still a melting pot, and that’s one of the things that makes this country great in me as a middle class, white male, the most stereotypical white male you could possibly be. I welcome it and I embrace it. And if one day, I’m not a majority in this country, fantastic. You know what’s going to change about my life at that point? Nothing. Do you know how much thought I’m ever going to give that? None, because I don’t care. I don’t care if the person living in the house next to me isn’t white. That doesn’t freak me out because I don’t live in constant terror of people who don’t look like me. Unlike the Republican party.