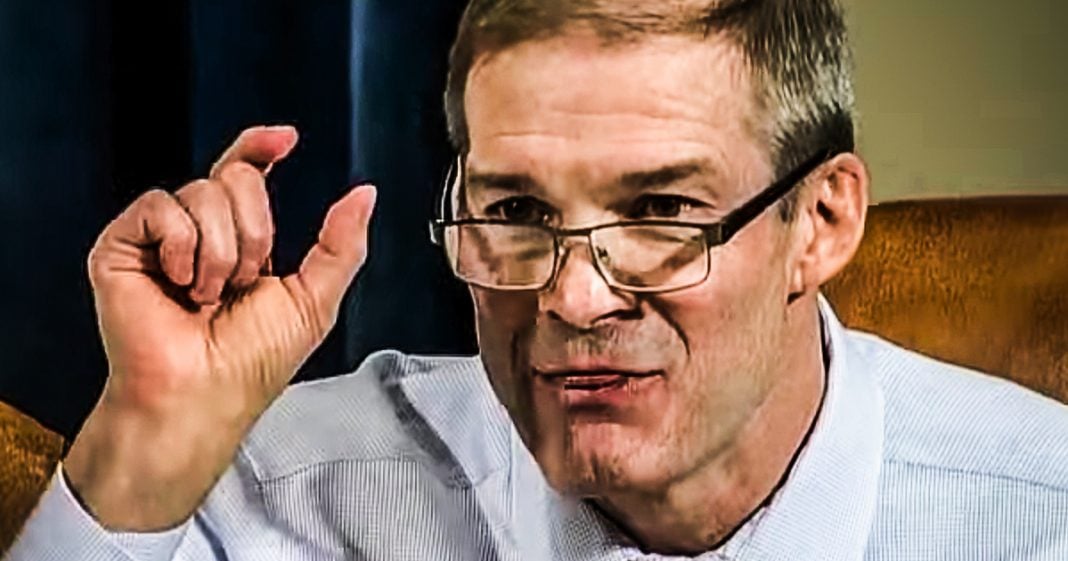 Journalists aren’t having a hard time getting to Republicans and even the President to ask them questions. But the problem is that they aren’t asking the questions they should be asking. Jim Jordan is getting a free pass on his cover up of the Ohio State abuse scandal, and Trump isn’t facing any questions about some of the most egregious things his administration has done. Ring of Fire’s Farron Cousins explains how this laziness is helping Republicans.

*This transcript was generated by a third-party transcription software company, so please excuse any typos.
The media this week and the week before and the month before that and the few decades prior to that as well has been uttered garbage here in the United States. But what happened with the media on Wednesday for some reason just seriously made me angry. Which is sad, It just made me very angry and here’s what I’m talking about. After the impeachment hearing ended on Wednesday, Jim Jordan goes out there and he talks to reporters and they’re asking him questions about what happened in there and you know some of them kind of asking him slightly more difficult questions, but overall they’re just letting him spew his lies and his hatred and you know, his misinformation. What should have happened is that one of those reporters, all you need is one. One of those reporters should have had the guts to step up and say, Hey Jim, look, I know you were busy all day with impeachment. I want to ask you about this other person that named you in a lawsuit last week that says they told you about sexual abuse at Ohio state university and you laughed it off. Why don’t you tell us about that. I don’t care about your lies about the impeachment hearing. I want to know why you let these kids suffer. And every single reporter that ever has the opportunity to walk up to Jim Jordan. Those are the questions you ask him what he has to say about the impeachment hearings or the impeachment inquiry in general or about Donald Trump or politics of the day. None of that matters. None of that matters. You ask him about that abuse because pretty soon he’s going to have to go to court because he’s named in the lawsuit. That’s a thing that’s going to happen, folks. The media is just whatever would you would happen in there. You asked some really fast questions. Wow. Dude, covered up sexual abuse for years, did nothing to protect those kids and these lazy reporters aren’t asking him a single thing about it and I know that wasn’t why they were there. I get that part. Okay, and I know that’s not what their corporate bosses want them to ask either, but guess what? Those are the questions that he needs to be asked. Those are the things that make him feel uncomfortable that the media has to do because it’s very real. And believe it or not, folks, it’s even probably a bigger story than those impeachment hearings. And if you don’t believe me, then why don’t you go ask one of the victims which one they think is more important. Cause I guarantee you it’s not going to be impeachment. People’s lives were ruined. And Jim Jordan did that by doing nothing. And while we’re on the subject, how about all these reporters who aren’t asking Donald Trump about all the lawsuits he’s facing? For example, the lawsuits by Summer Zervos and E. Gene Carroll who are both suing him for defamation after he claims he didn’t sexually assault either one of them. No, we’re not asking him those questions. We’re just asking him things like, Hey, there was a hearing today. What did you think of it? Who cares what he thinks of it? You know what he thinks of it. And if you don’t go spend five seconds on his Twitter feed, when you have the rare opportunity to ask one of these higher ups in our government a question, you better stick it to them. And you know what, there was a time when reporters in this country would actually do that instead of lobbing these weird, So what’d you think about the impeachment inquiry, Mr. Trump? Instead of asking things like that, they would go and be like, yeah, Hey, we had that impeachment inquiry. So I hear you’ve locked up 70,000 children along the border this year. Any, any thoughts about that humanitarian disaster you’ve created? Hey, how about those 40 plus women that, uh, uh, Ronan Farrow says you’ve have said you’ve sexually assaulted them. Any, any comment on that? Cause that’s what we’d like to know about. Those seem pretty important, but no, because the media today is lazy. The media today doesn’t care about real questions and real issues. They care about the shiny objects because unfortunately the public has pushed them in that direction, but not nearly as much as their corporate masters have. They’re the ones calling the shots because you can’t sell advertisements talking about sex abuse up at Ohio state. So you got to talk about the big shiny object, which is impeachment.