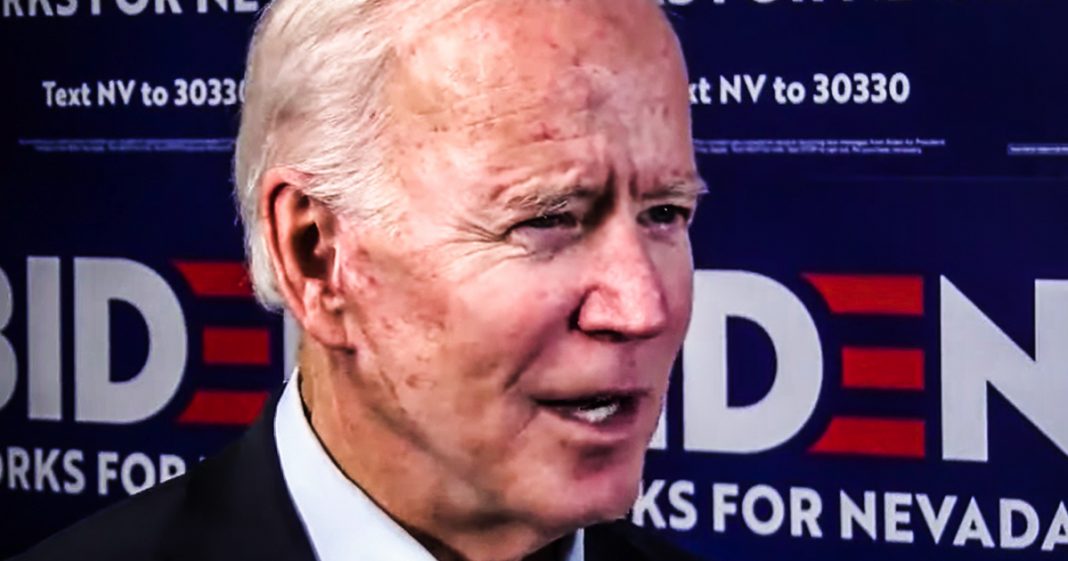 During a town hall in Las Vegas this weekend, Vice President Joe Biden said that he isn’t supporting the decriminalization of marijuana on a national level because it may actually be a gateway drug. Biden did say that more research is needed, but all of the available research already shows that this is just a myth. Ring of Fire’s Farron Cousins discusses Biden’s ridiculous talking point.

*This transcript was generated by a third-party transcription software company, so please excuse any typos.
On Saturday, former vice president Joe Biden did a town hall event in Las Vegas where he showed just how out of touch with modern times. He truly is. Joe Biden told that crowd that no, he does not support the national effort by some candidates to decriminalize marijuana because we don’t know if marijuana is a gateway drug or not. Joe Biden told the crowd now all of the headlines about this story, I’m going to be honest here. They say that Joe Biden says, marijuana is a gateway drug. No, Joe Biden did not say that marijuana is a gateway drug. He just said, we don’t know if it’s a gateway drug, which is probably not quite as bad as saying that it is, but still just as stupid as saying that it is because here’s the thing. The available scientific research on the subject shows that no marijuana is in fact not a gateway drug. Marijuana users are no more likely than non marijuana users to try hard drugs. There is no correlation between using marijuana and moving onto higher drugs. That is what all of the studies have told us. Hell, that’s what the CDC itself tells us. The center for disease control, part of the federal government says, yeah, it’s not a gateway drug, and yet Joe Biden’s up on that stage in Las Vegas saying, we don’t know, or you sounded like a climate change denier. That’s what he sounded like to me. That’s what I heard coming out of his mouth. Well, you know, there’s scientific things that say one thing and maybe there’s not enough science on it. It’s debatable. He told us it’s debatable. No, just like climate change. It’s actually not debatable, Joe. We have the scientific studies, we have the research. There is no correlation between using marijuana and abusing other drugs. It simply doesn’t exist. Here’s the thing though, he did manage to say this in quite a diplomatic way. Here’s some quotes from the truth of the matter is there’s not nearly been enough evidence that has been acquired as to whether or not it’s a gateway drug. It’s a debate and I want a lot more before I legalize it nationally, I want to make sure we know a lot more about the science behind it. It’s not irrational to do more scientific investigation to determine which we have not done significantly enough, whether or not other anythings that relate to whether it’s a gateway drug or not. And dude, you sound, again, just like a Republican trying to deny climate change. You know, the science is out there. You know, the research is out there. You know, these scientific papers exist proving you wrong, but you can’t take the stance of being wrong. So you cloud the debate just like the Republicans on climate change, just like the anti-vaccine people on anti-vaccine things. You say, well, we don’t know. We’d all know. Maybe it’s a thing. It’s not. Climate change is real. Vaccines don’t cause autism and marijuana is not a gateway drug.