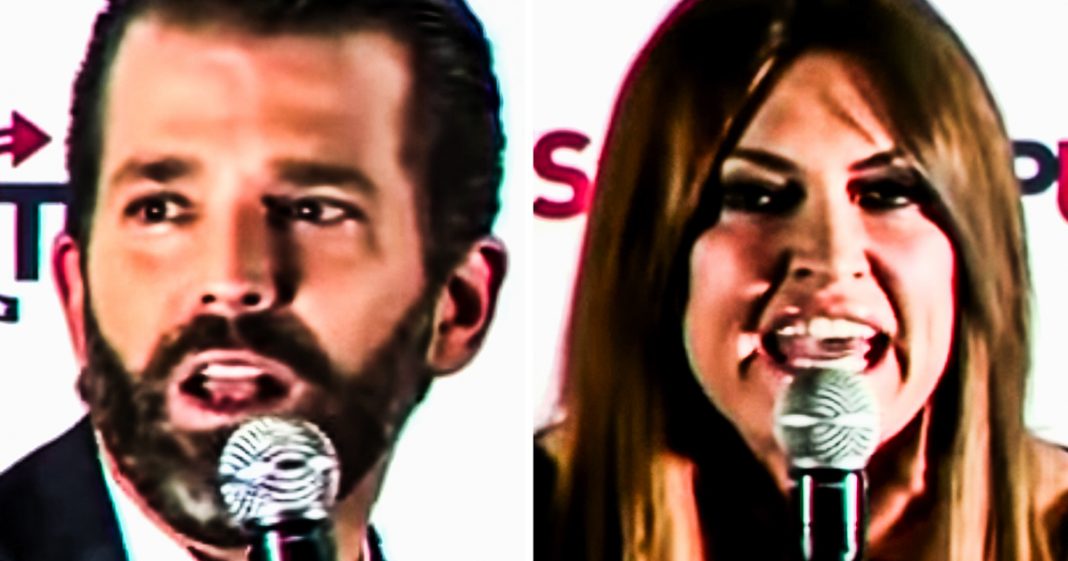 The student body president at the University of Florida is now facing an impeachment inquiry after paying $50,000 out of the college’s general funds to Donald Trump, Jr. and his girlfriend Kimberly Guilfoyle to have the two speak on campus. These funds are not to be used to promote any partisan activities, and Junior and Guilfoyle spent most of their time engaging in partisan politics. Ring of Fire’s Farron Cousins explains what is happening, including the student President’s link to the Trump campaign.

*This transcript was generated by a third-party transcription software company, so please excuse any typos.
How was it that everything that the Trump family touches just turns to complete and utter crap? Think about this. It was announced earlier this week on Tuesday actually, that the student body president of the university of Florida was facing an impeachment inquiry that happened this past Tuesday. And do you know why this student, Michael Murphy is facing an impeachment inquiry because he’s being accused of the illegally using student funds to pay Donald Trump jr and his girlfriend Kimberly, uh Guilfoyle $50,000 to come speak at the university. Now, here’s the backstory on all of this. Obviously, if you want to have any kind of politician or political writer, which this was to promote his book triggered, um, come to your school, you can do that. You gotta raise the money or use it from your clubs, fees, whatever it is, you pay them the money. And sure, if it’s partisan, it’s partisan, whatever, that’s perfectly fine. But what mr student body president at university of Florida, Michael Murphy did, allegedly was, he used mandatory student fees to pay the $50,000 to Donald Trump. Now, mandatory student fees are exactly what they sound like. Fees that every student is forced to pay to the college. The college is a publicly funded university as well, which means it cannot in any way support or engage in partisan politics. So by taking those mandatory student fees and using that to pay for a partisan political event does become an impeachable offense for Mr. Michael Murphy. And during Donald Trump and Kimberly Goyal foils, little speech down there, they engaged in partisan politics. They promoted his father’s campaign, so automatically off the top, that makes it a partisan event because they’re elevating a political party slash politician that partisan game over a Gilfoyle Goyalfoil. However you say it. I honestly don’t care. She’s a horrible human being. Um, she attacked verbally the liberal protesters at the event, both inside and out of the event. So that’s engaging in partisan politics. Donald Trump jr did the same thing. There’s no question this was a partisan event, but Michael Murphy thought, you know what? I don’t want to spend our, our club money on this. I’m going to take money from the college itself to pay this jerk because after all, I know that people will work for his campaign. There’s the plot twist folks. She, Michael Murphy isn’t just some kid who Rose up through the ranks at the university of Florida, got elected. Their student body president came from nothing. Oh God, no folks, his daddy is a high profile Republican lobbyist and they have millions of dollars and his daddy’s given a lot of money to the Donald Trump campaign. And then this past summer, lil Michael Murphy was at a party at one of Donald Trump, 2020 staffers houses like not just a house party like you. You’ve seen it at university of Florida. I’ve been to a couple. Those are amazing. No, this was one of the crappy kinds where it’s all the horrible Florida Republican rich folk hanging out. And Michael Murphy was there and that’s how we met the person who put him in touch with Trump jr to come to the college impeach this kid, impeach him today because you knew exactly what he was doing. But this is how incestuous and disgusting Florida politics and Florida universities truly are. If you’re a Republican in this state and you’ve got a lot of money, you can get away with anything. Just ask Matt Gates and his dad, Don Gates, both of them got away with massive crimes and this little kid who inappropriately used his college’s money to benefit his friend Donnie jr, I’d say he probably based on his current behavior, has a pretty bright future and Republican politics because he’s already on the path of corruption and deception, which pretty much are the core of the entire Republican party today.