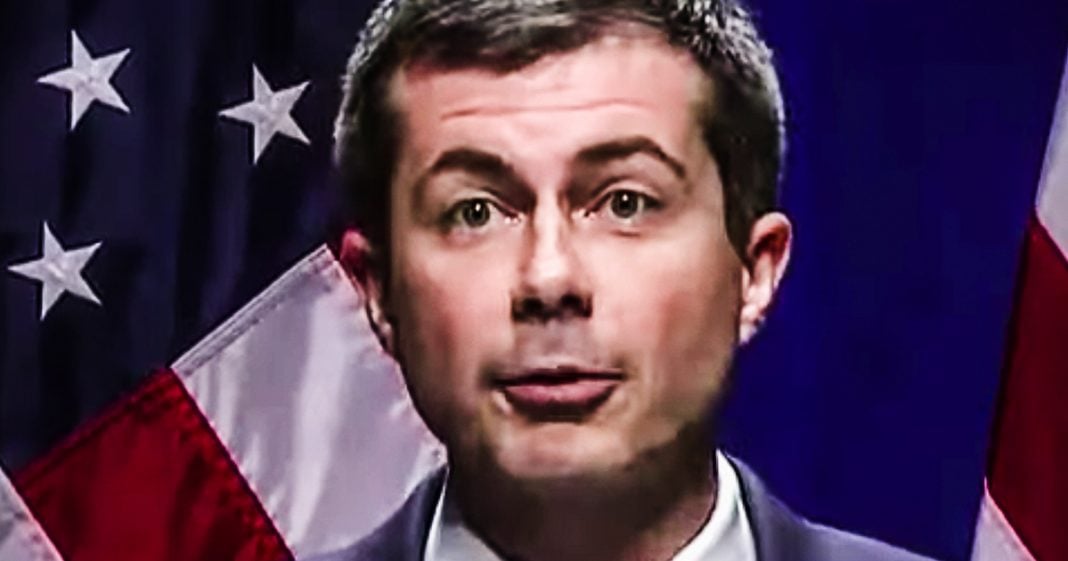 Pete Buttigieg has had a bad couple of days. Not only did he dupe a few hundred black voters in South Carolina to become “supporters” of his Douglas Plan, but he also told a crowd this weekend that he was open to sending U.S. troops to Mexico to combat gang violence. Mexico has not asked for our military help, nor should they. Ring of Fire’s Farron Cousins explains why Buttigieg is embracing his neoliberal roots today.

*This transcript was generated by a third-party transcription software company, so please excuse any typos.
On Sunday, South bend, Indiana, mayor Pete Buttigieg appeared in Los Angeles, uh, at a Latino forum where he suggested that he’s not completely closed off to the idea of sending us troops down to Mexico to fight drug cartels and gangs. Now, he did issue a caveat that the only situation in which he would send the U S military down there to Mexico would be if there were American lives in danger. Right? He’s not just gonna send them down there Willy nilly to go and kind of engage in any of this regime change we’ve seen the U S military engage in for decades. No, no, no. It’s only if, obviously there’s Americans down there who, who might eventually get hurt. Then Buttigieg says, yeah, we could send the U S military down to protect them. And uh, the crowd wasn’t really thrilled with that. But here’s what’s happening to Pete Buttigieg, and I’m about to get into an even bigger issue in just a second. But here’s what’s happening. He’s rising in the polls. Donors are starting to look at him and say, you know what, this guy might have staying potential. He could possibly win Iowa and if he wins Iowa, that’s going to put him in this race a lot longer, so maybe we give him a little money. Maybe he’s not going to be the radical reformist like a Bernie Sanders or to a lesser degree, Elizabeth Warren. No Buttigieg is status quo and Buttigieg is a neoliberal and he has no problem even thinking that even if it’s under a certain set of circ, a certain set of circumstances that it’s okay to send the U S military down to Mexico. Hey, guess what? It’s not okay. Let’s get that out of the way right now. It’s not. Mexico has not asked for our military help to go down there and tackle the drug cartels. Not to mention the fact that if your real concern is these drug cartels from Mexico, well, hell, here’s an easy idea. How about we stop the criminalization of drugs here in the United States? That’s actually going to put most of those cartels out of business. If we just change our laws, suddenly they go bankrupt, but no Buttigieg doesn’t want to go that route. He says, well, if there’s Americans down there, I guess we’re going to have to send our boys in blue down there and go ahead and shoot them up. Right. Typical neoliberal, great old social issues, fantastic on social issues and then pretty much right wing on literally everything else that’s a neoliberal folks in case you were wondering and that is exactly what Pete Buttigieg is, but Buttigieg has bigger problems than just giving a terrifying answer at this forum out in LA because over the weekend he showed that he has virtually 0% support from any African in the United States. We found out on Saturday that Buttigieg, I guess a day or two before released his Douglas plan for South Carolina and in their announcement email they said, we’ve got 400 black South Carolinians who have said they like this plan by Buttigieg and they endorse it except he didn’t actually have 400 black people and the people that he did have that were endorsing it didn’t even know they were endorsing it because here’s what they did. And Ryan Grim writing for the intercept uncovered this, you see days before they announced this, a Douglas plan, Buttigieg campaign sends out this email to a bunch of people in South Carolina, but what they didn’t notice it the fine print at the bottom of the email said, if you do not want to endorse this, you have to reply and let us know. If you don’t tell us you don’t want to endorse it, we’re sticking your name on it saying you endorsed it. So these people did not willingly contact Buttigieg and say, heck yeah, I want my name on this. They tricked them. And then those 400 black South Carolinians, they put on that list, um, about 40% of them were white people actually that they just misclassified as black people. And then a lot of the other black folks on there came out and said, I never signed off on this. I do not support it. I don’t want my name on this. So that was pretty bad for Buttigieg. Right? All you actually had to do was reach out to 400 black people in South Carolina. And you couldn’t even do that because they don’t support you. And then then his husband was down in new Orleans, a city that’s only 30% white, and he posts a picture of all these Buttigieg supporters around him. Couple dozen in this picture in new Orleans saying, this is Buttigieg, new Orleans crew, not one person of color. In that picture, dozens of people in the picture about as white as can be in a city that’s only 30% white. And what’s funny is that some of these folks line up to support Buttigieg are the same people who said, Bernie Sanders can never win an election because black people don’t like him. He said that in 2016 and now they’re lining up behind a candidate who literally has no support from black people. So little in fact that he has to fabricate it. Buttigieg is a fraud. Buttigieg is a Neo liberal and Buddha judge will absolutely lose to Donald Trump if we make him the nominee in 2020.