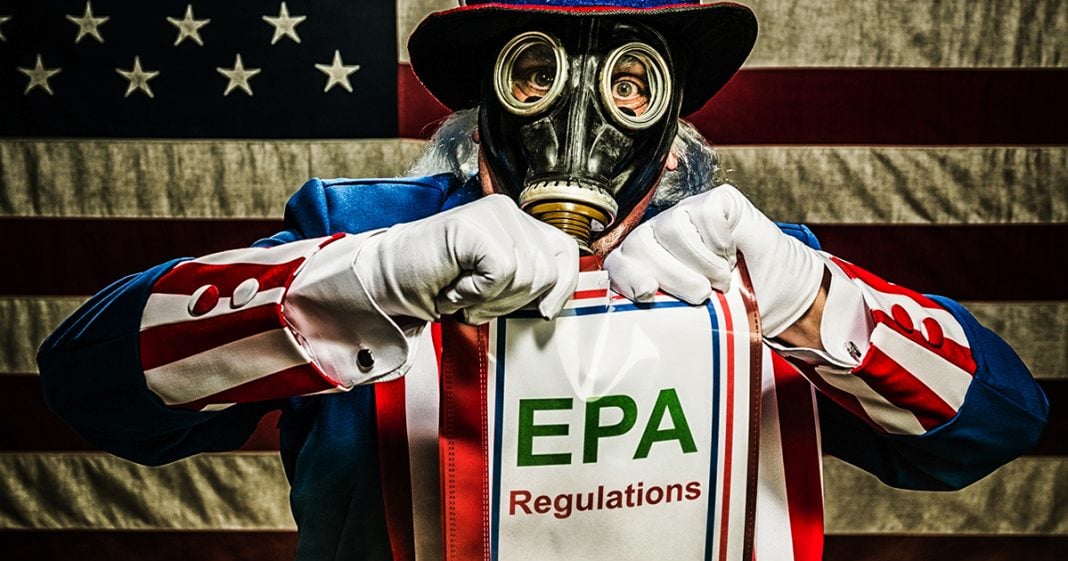 The Trump administration is preparing to significantly limit the amount of science that can be presented to the EPA when they are determining rules, regulations, and limits on harmful substances in the environment. This is just their latest assault on science, and it is one that the entire country will pay for with our health. Ring of Fire’s Farron Cousins explains what this rule change will mean.

*This transcript was generated by a third-party transcription software company, so please excuse any typos.
A draft rule written by Donald Trump’s environmental protection agency has been revealed to the public and this new rule, if it becomes permanent, will significantly limit the kinds and types of science that the EPA takes into consideration when they make these new rules and regulations and put new limits on toxic chemicals. That way we may be breathing or drinking. Here’s what this new rule specifically does. They say that if any study comes before them, when they’re in the rule making process and they can’t release all the raw data from that study, then they won’t use that one. Doesn’t matter if that study shows that the chemical, the EPA is weighing whether or not to ban or just allowed to ah free flow freely. If it shows it’ll kill us. If they can’t release the raw data, then they’re not going to take it into consideration. It’s almost like that study doesn’t exist. Now, you may be thinking to yourself, well, why don’t they just release the raw data? What’s the problem with that? Well, they should have nothing to hide, right, and yeah, you’re right. They should have nothing to hide. Here’s the problem though. A lot of these public health studies, including the ones that got lead out of our paint and mercury out of our water from coal fired power plants, those relied on independent medical records of average us citizens. Those can’t be released. Yeah, we have the confidentiality there folks. Your, your doctor can’t just go out and say, Hey, take this dude’s medical records and go let everybody in the world see them. No. That’s why the EPA made this rule, because they know where the science comes from. They know what doctors are not allowed to release without patient permission. And that’s why they made this rule. So if you have a study that includes 1000 independent patients here in the United States, every piece of that 1000 becomes a part of the raw data. So if you get even one of those 1000 people saying, no, I don’t want my data out there, they can’t go out and take that data out of the study. The data’s already in there. So one person could completely invalidate that entire set of research. And that’s the problem. And this is a rule that has been pushed by the industry, by the fossil fuel industry, by the chemical industry, by Republicans who are on the Dole from these organizations and industries because they don’t want more regulations when we’re talking about the EPA and the rules that they put in place. It is important to remember that $1 spent on regulation results in $7 in new economic activity. These regulations not only help the economy, they save lives. When Donald Trump announced, uh, when he came into office that he was going to repeal some of these clean air standards from Obama, some of which he has, we have seen over 1,400 people die so far just this year from his decision to repeal those cleaner air standards. How high is that number going to jump? That death toll going to jump if the EPA finalizes this rule that says, if we can’t release all your data confidential or not, then we won’t take it into consideration which will allow toxic chemicals back into our lives. Oh, and here’s the kicker, folks. They’ve also said that we may decide to make this rule retroactive as well. Meaning if all those people from the lead paint studies, if all of those people from the mercury studies, if they don’t agree that we can release their raw data, then we can no longer take those reports into consideration. So we may be headed right back into the era of lead fricken paint. Thanks to Donald Trump.