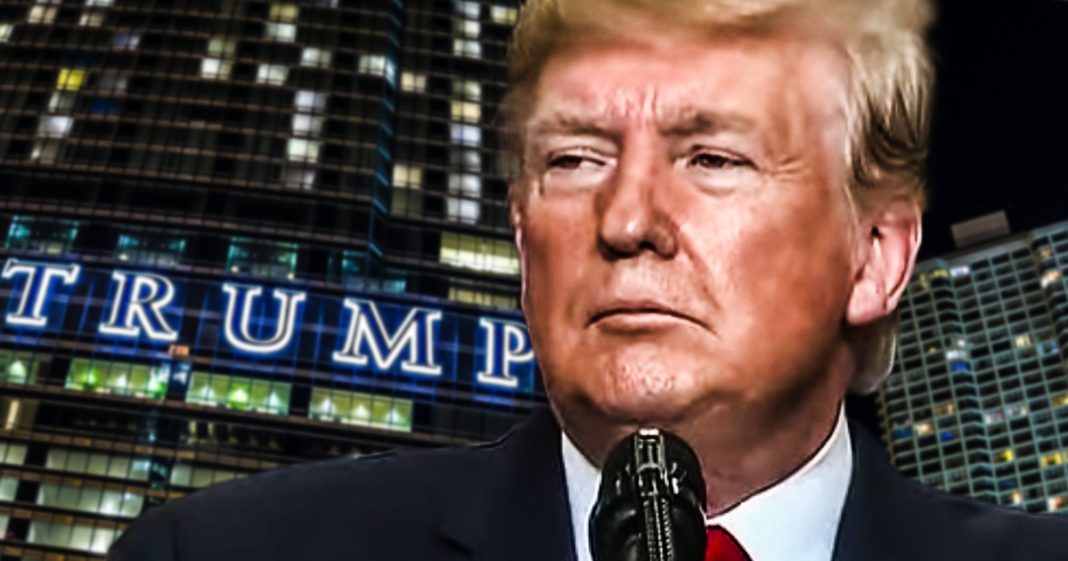 Donald Trump’s Chicago hotel – the one that his sons “conveniently” forgot to pay taxes on – has seen its income drop by nearly 90% since Donald announced he was running for President. This is a trend that is becoming increasingly common for the President, and hopefully it is one that continues long after his administration is finished. Ring of Fire’s Farron Cousins explains the drop in income and why it is likely to never recover.

*This transcript was generated by a third-party transcription software company, so please excuse any typos.
According to financial records obtained from cook County, Illinois, Donald Trump’s Chicago hotel has seen an 89% drop in revenue from 2015 to 2018 the most recent year they were able to get those records, which basically means that ever since Donald Trump announced that he was running for president, people started running away from his Chicago hotel. The revenue at this hotel dropped from 16.7 million to 1.8 million. And here’s why. Well first before I tell you, here’s why. Let me tell you why. The Trump organization and the Trump family thinks this has happening. They think it’s happening. They’re claiming it’s happening because of all that dang violence in Chicago. Nobody wants to go there and nobody wants to visit. That’s why we’re losing money because Chicago is a hell hole. And if that were true, then you would see hotels across the board losing money, not just the trumps. It would be an over all city wide effect. That isn’t happening. Most hotels in the city of Chicago are either staying steady over that same time period or they’ve seen their profits increase. So their talking point is a lie, which is not surprising. Here’s what’s really happening. People don’t want to be associated with Donald Trump. The wealthy elite in this country have always viewed Donald Trump has a bit of a fraud. He was an outsider. He didn’t quite fit in. They didn’t believe he was who he said he was and they were correct about it, but they would occasionally hob knob and hang out with them because they knew he did have a little bit of influence. Even if he didn’t have as much money as he always claimed to have, but they never quite took him seriously. So they’re not really using his hotels because they think it’s gaudy. They think it’s tacky and they understand that much like him. It’s all fake. Meanwhile, Donald Trump’s supporters, the average person in this country who supports Donald Trump, they can’t actually afford to go to Donald Trump hotels, and I’m not knocking them saying, you’re dirt poor. It’s that these are overpriced ritzy hotels and the average tourist simply can’t afford that much when going on vacation. and this isn’t just happening in Chicago, we’ve talked about in the past, it’s happening is, has at his Doral, a golf course down in Southern Florida. They’ve lost almost 70% of their revenue since Trump announced that he was running for president. And again, it’s because the wealthy elite don’t take him seriously and his actual supporters can’t plop down that kind of money just to play a round of golf. And people in the middle who could maybe afford that don’t want to be associated with his name. In fact, even the Trump organization at this point doesn’t always want to be associated with his name. We’ve seen them take the Trump name off several things that they still own because they recognize that it is hurting their business. Donald Trump is toxic for the Trump organization and the other people inside it that aren’t related to Donald Trump. They understand that, they recognize it, but to their credit, both Donnie jr and Eric also recognize that the people who actually support Donald Trump can’t afford it. Because earlier this year, they actually, uh, tossed out the idea of starting a budget hotel chain that the average Trump supporter could afford. So before you think I’m making fun of these people, please know that Eric and Donald jr are the ones who acknowledged that the average Trump supporter can afford his hotels. And those who can don’t want to. My hope is that this is a trend that continues long after Donald Trump leaves office, because as cool as it would be to see this guy go to jail for some of the crimes he’s committed, it would be even more awesome to watch this man live the rest of his life as a free man, but without a penny to his name. That would be the thing that would bother Trump more than any prison sentence ever could.