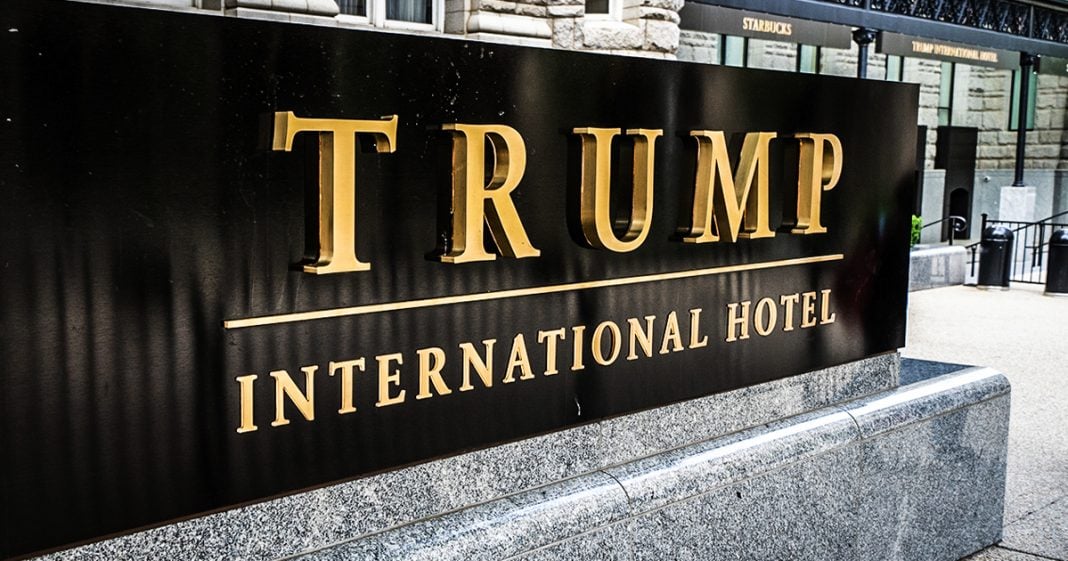 A new report has shed some light on just how much money Republican groups are spending at Trump properties in order to curry favor with the President. The report says that, since 2016, Republican organizations and candidates have spent more than $8 million at Trump’s properties, putting that money directly into the pocket of the President. Ring of Fire’s Farron Cousins explains why this is corruption, pure and simple, and further proof that the Emoluments Clause violations have to be a part of the impeachment.

*This transcript was generated by a third-party transcription software company, so please excuse any typos.
All over the world. Donald Trump’s businesses, his properties, his golf courses, his hotels, everything they’re struggling a bit. And one of the biggest reasons is because the world now sees Donald Trump for what he is. He’s a charlatan. He’s a con man and he’s a bigot. And most people who have the money don’t want to go spend their money supporting this man. Or even if they do support him, they still don’t want to be seen supporting it. So yeah, his businesses have taken a pretty big hit since he decided to run for president. But there is one thing keeping them afloat. There is one group of groups keeping millions of dollars flowing into Donald Trump’s own pockets. And according to public citizen, those are conservative groups and Republican candidates who since the year 2016 have spent more than $8 million alone at Trump’s properties here in the United States, all coming from Republican groups and Republican candidates, more than $8 million since he secured the Republican nomination for president in 2016 and we all know why they’re doing this. They’re doing this to Curry favor with the president of the United States because they know just like everybody else on this planet knows now if you want something from Donald Trump or if you want him to even just like you give him money, that’s all you gotta do. It’s very easy, especially when you are dealing with groups that have a lot of money. Oh, we need to put on an event and I’ve got $2 million to spend. Let’s do it at Trump’s Washington hotel. Oh, we need to do something in Florida and we’ve got a little bit of money to kick around. Let’s go to Mar-a-Lago, and they’re doing it because they want the president to see them. They want the president to know that whatever group it is, whatever candidate it is, they wholeheartedly support the president so much that they’re going to slip a little something in his pocket. And yes, as this public citizen report points out, Donald Trump himself no longer runs his company that a privilege falls on to Eric and Donnie jr, but Donald does, however, still have complete control over his trust and is allowed to withdraw money whenever he wants to. So really nothing changed except he put Beavis and Butthead in charge of the business. But here is the most shocking thing. This is from Politico writing about this, at least another 179 foreign governments, businesses, trade associations and religious entities. Some with interest before the federal government have frequented Trump’s properties, 179 group groups. Some of those include foreign governments and we have talked in the past how reports have shown that you have some foreign governments who actually go and rent entire blocks of hotel rooms at Trump’s hotels, specifically the one in D C they prepay for them and then they just never show up and use them. that to me sounds like a bit of money laundering, doesn’t it? We need something from you, but we can’t just put the money in your pocket. So we’re just going to book a bunch of rooms at your hotel. We’re going to pay for those, and then we’re just not going to show up. You still get paid. So you know, we gave you the money. That sounds like money laundering, but the bigger takeaway here is that with the Democrats moving forward with impeachment and with them saying, we’re going to keep it limited to Ukraine, you can’t do that. You have to tie in these emoluments clause violations, because that is what every event happening at any Trump owned property around the planet is it is an emoluments clause violation. People know how to buy this president. They know how to pay him off, and it’s high time that Congress put an into it.