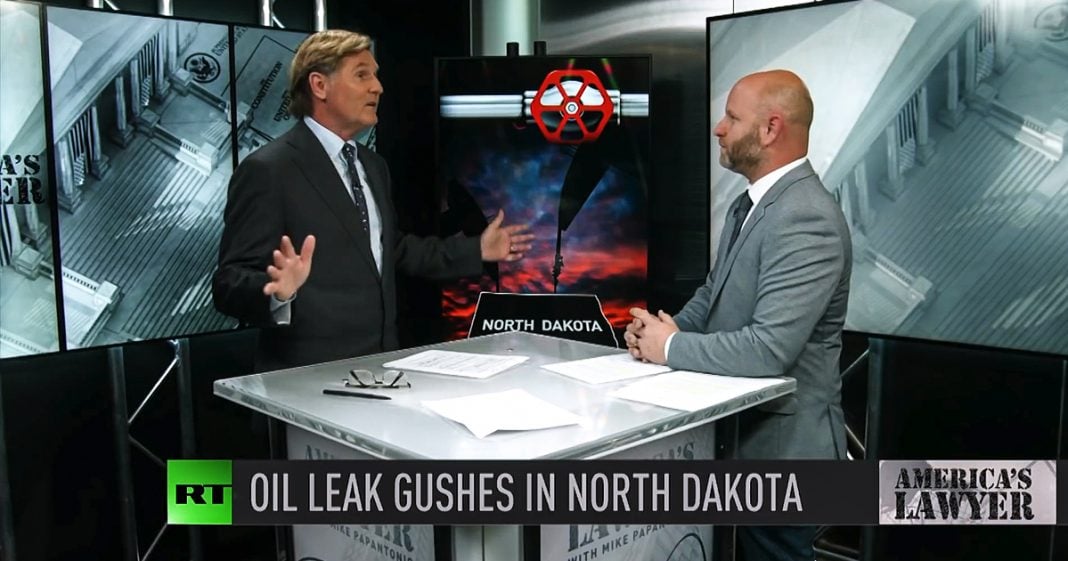 Mike Papantonio:             The Keystone Pipeline has leaked more than 400,000 gallons of oil in North Dakota right above the America’s biggest aquifer. Showing once again that these pipelines are a bad idea. Again, it’s a story we talked about. The first time we’ve talked about this story, it was years ago and the idea is you’ve got the biggest aquifer in the entire world, not just the United States, in the entire world right there in that area where we’re taking this pipeline and now we’ve got 400,000 gallons of toxic sludge. Interesting point about it, we don’t even know how bad it is because they’re keeping it a secret.

Farron Cousins:                  Right, and they, the company themselves, TransCanada isn’t even the ones going out there to find out what happened and why this leak exists. No, they subcontract that out. So they send their own private company that they’ve hired, usually companies they create themselves, to go out there and inspect it. They make the repairs, they come back to the company and just say everything’s fine. But we knew, everybody knew this would happen. This, this Keystone Pipeline in its first two years of operation was averaging one leak every three weeks.

Mike Papantonio:             Okay. And the trial lawyer magazine, you have reported, I think the last thing I saw you reported four spills over the last 10 years. Is that about right? Four major spills.

Mike Papantonio:             Okay, so now what the, they’ve hired security as you point out. They’ve closed off the roads. You can’t, if somebody wanted to find out, even do a test to do a well test. How deep has this gone? Has it affected the aquifer? They’re keeping that really secret. Just like they kept almost every one of these spills a secret for a matter of days until they could regroup, they could bring in the special, you know, the special guys to make it, to cover it up, make it look like it’s not so bad. This is just a repeat of that. But this is the biggest at 400,000 gallons, isn’t it?

Farron Cousins:                  Right. It’s one of the biggest we’ve seen on land in the United States in decades, and in addition to hiring these private people to come out and assess the situation and try to make everything look good, they’re also going to be bringing out their PR specialists. They’re going to be telling us things like, well, we caught it very quickly because we’re good at that. You know, we were on top of it from day one. This thing could have been huge, but we’re a responsible company. We didn’t let that happen. They’re going to tell us, no, there’s no contamination in the ground. You could have your children go out and play there right now. They’d be fine. None of it’s true, but that is what we’re going to start seeing once they actually secure the leak.

Mike Papantonio:             And the people that were out front on this, this was even corporate media did not jump out front on this story. You had social media. You have, you have programs like ours, Cenk Uygur. You had people that did social media that were on the front lines when the protests were taking place. People that had fire hoses turned on them. They had dogs sicked on them. It was just like a rerun of the civil rights movement in the United States and every time it happened, the talking point was, it’s not a matter of when the spill takes place, it’s a matter of how many take place. How often they take place, and how closely do they move to the biggest aquifer in the United States. It, wasn’t that part of the story?

Farron Cousins:                  Absolutely. It, and again, we all said this is going to happen because oil pipelines are notorious for leaking, for breaking, you know, just average wear and tear. Somebody stumbles over it, which has happened causing a massive leak. These things are not safe. They never will be safe.

Farron Cousins:                  But as long as these companies like TransCanada, who had a huge ear to Hillary Clinton in the Obama administration, that’s why Keystone is even a talking point these days.

Mike Papantonio:             I mean, he legitimized it, and now Trump is putting it on steroids. Okay. It’s the same path we’ve seen in politics over the last eight years. The Democrats come in and legitimize something. The Republicans come in and put it on steroids and make it worse rather than the Democrats doing what they should do, and that’s to draw a line in the sand and say, you can’t cross this line. We always let them cross the line. Republicans take advantage of that and make it worse.