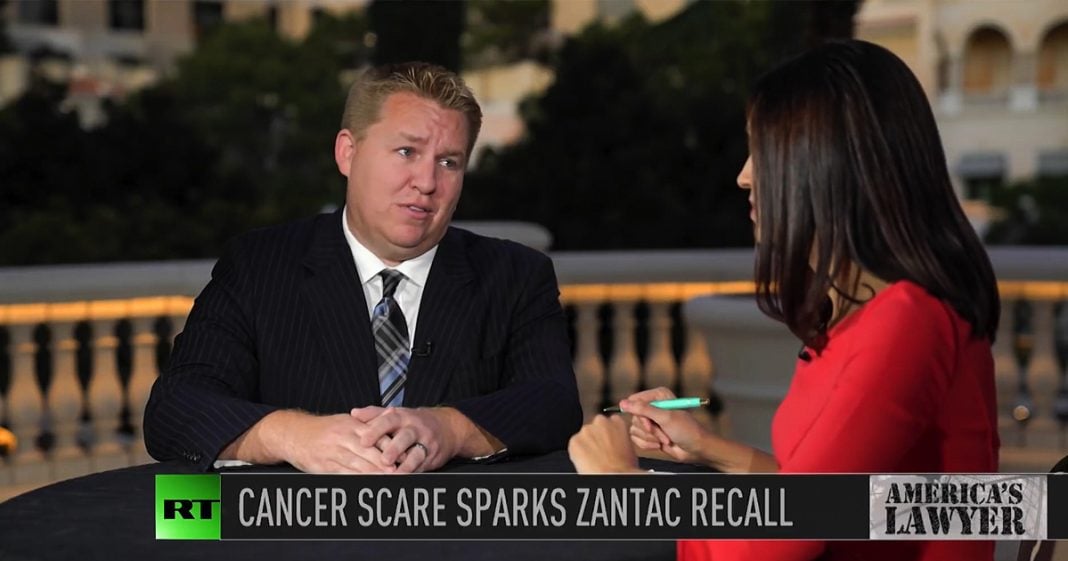 Via America’s Lawyer: Filling in for Mike Papantonio, RT Producer Brigida Santos guest hosts this week’s special episode from the Mass Torts Made Perfect conference in sunny Las Vegas! Brigida is joined by attorney Daniel Nigh to discuss the flurry of lawsuits against the manufacturer of popular heartburn relief aid Zantac, which contains a compound linked to various cancer growths.

Brigida Santos:                   Hi, I’m here with Daniel Nigh, he is an attorney with Levin Papantonio and he is handling the Valsartan national litigation and basically this is the case against Zantac. So walk me through this case. Why is this drug being recalled?

Daniel Nigh:                          Well, we got tipped off from one of our experts about this problem about three months ago and what, what we’re finding is it’s the same type of contaminant that we had with Valsartan, but at potentially much higher levels for a much longer period of time. So what happens is this molecule, Zantac breaks down inside of the body and sheers off what’s called NDMA, which is a very genotoxic carcinogen that causes cancer large amounts of volume, at large volumes. Sheers off large amounts of NDMA into the body, both in the stomach and in the kidney and it causes cancer in numerous sites.

When they want to test animals to see, induce them with the cancer and they want to study that cancer inside of the animal, NDMA is the toxin of choice to induce that cancer. You will get a tumor 100% of the time, whichever organ you induce that NDMA. So this is a, this is a catastrophic problem and it’s coming to light now. The pharmacies have now realized it. They’re pulling it off the market. We’ve now seen that Sanofi has recalled all the over the counter medication. I’m not sure you can purchase Zantac today in the US.

Daniel Nigh:                          Well, there’s a lot of problems. If you’ve been exposed to it and you’ve got a cancer after being exposed to it, I really think you should seek legal help immediately. If you don’t have a cancer yet, you need to be following up with your doctor, letting them know that you took the Zantac and you were exposed to this carcinogen. The Dr. may not, may not realize the problem today, but he’ll, you know, in time we’re going to see more and more of this information’s going to come out and it’s going to show that it’s a carcinogen. So the other thing, if you have an unexplained pain over a long period of time, get it checked out because that could be your first sign of a cancer.

I represent a lot of clients, unfortunately they checked out that unexplained pain too late and that was the difference between them, you know, surviving the cancer versus not. And so getting those regular testing, if you’re over 50 years old, get a colonoscopy. A lot of times that’s how you find your, find your, your colon cancer. Your at an increased risk of cancer if you took Zantac over a long period of time, there’s no doubt about it. With these levels that are in this NDMA absolutely increased risk of cancer.

Brigida Santos:                   What about the other generic versions of this, Ranitidine, are they finding the same problem? Have those products been pulled from the market as well?

Brigida Santos:                   Wow. So what can people do now moving forward? If they have heartburn, they don’t take this medication obviously. Are there other brands of different drugs that also are showing problems that treat heartburn?

Brigida Santos:                   Can you share any stories of what kinds of people these are? Because it’s very easy to forget the faces of the people who are affected by this. It’s not that you’re just going after a corporation, you’re, you’re going on behalf of the victims of this.

Daniel Nigh:                          Absolutely. And it’s there, there are a lot of sad stories. You know, it can be people that are, that are elderly. We could be talking about people who are new parents, you know, people that are in college. I mean I, I’ve seen the whole spectrum, but even, even more than that, I represent a patient who was taking this as an infant because it’s prescribed for infants who have acid reflux and was diagnosed with leukemia at the age of four. And when you look at the, the pattern, the amount this, this infant was taking, it’s highly explanatory that the Zantac may have been responsible for that leukemia diagnosis.

Daniel Nigh:                          So that happens. Also pregnant women, it was indicated for pregnant women to take and one of the issues that we’re looking at is that it does appear that NDMA crosses the placental barrier and very well could the child cancer as a result of it. So there’s a wide range of people. Unfortunately, I don’t think any, any person’s safe that is taking Zantac from this issue.