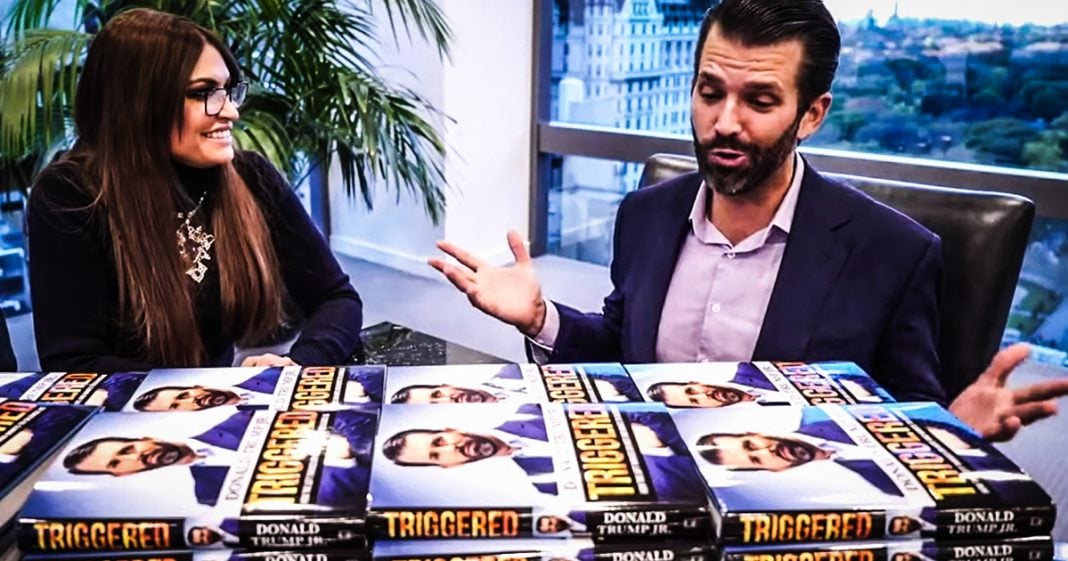 Donald Trump congratulated his son Don, Jr. this week for having his new book “Triggered” make it to the top of the New York Times Bestseller List. But what Trump didn’t mention is that his campaign bought up tons of copies of the book in order to pad those sales and make it look like a bestseller. The New York Times noted that a large portion of the sales came from “bulk orders” and not individual buyers, which is exactly what Ring of Fire’s Farron Cousins predicted would happen.

*This transcript was generated by a third-party transcription software company, so please excuse any typos.
Well folks, last Tuesday, November 5th Donald Trump jr his new book triggered, came out and as expected, it immediately Rose to number one on the New York times bestseller list prompting Donnie Junior’s father, the president of the United States to tweet out the following. He said, wow. I was just told my son’s book triggered his number one on the New York times bestseller list. Congratulations Don, and sure enough, yeah, you turn in the bestseller list. There it is, clear as day triggered number one and there’s some weird little dagger looking asterisks type thing next to it. Wonder what that means. Oh, according to the New York times that that indicates that there was actually a lot of bulk purchases of this book, which means most of the sales apparently were artificially inflated and here’s the thing. It would have taken some kind of remarkable super-intelligent visionary to have predicted that this would have happened. All right. There’s basically a zero chance that this book is not unfortunately going to become a best seller. You have lots of Maga hat where’s out there, who are going to scrounge up enough money to go buy a copy of this, even if it means having to forego dinner that night because they just want to support the Trump family. And if all else fails, Donald Trump jr will do what all other rich people do when they write a book. They’ll buy tons and tons and tons of copies of it for themselves and then shipped them off to a warehouse. Never to be seen again. But Hey, it actually does show that you sold more copies of your book. So kudos to you. Well folks, that was from July 23rd July 23rd when it was announced that this book would be coming out and it wasn’t that hard to predict, to be honest. This is what conservatives do and that’s what I talked about in that clip. That’s how conservatives operate. They get these organizations, you know the, the, the trust funds, the foundations, whatever it is, they buy bulk purchases of these books to artificially inflate them to number one. Then they give these books out at events and things like that for free. Now here’s the thing with Don jr, his book was mostly purchased by his dad’s 2020 presidential campaign. They sent out an email not that long ago, and Judd legum, uh, who founded ThinkProgress, uh, was the one who caught this. And in this campaign email, which was signed by Donald Trump jr himself, he talked about how horrible and stupid liberals are and all that and blah, blah, blah. And Oh, by the way, we can give you a, a signed copy of my forthcoming book. So in order to have those books, the campaign had to bulk purchase them so that they had them to give out. And that’s exactly what they did. And that’s why Donald Trump Jr’s book became the number one bestseller in the United States. Now, I have no doubt that even if they hadn’t done this, this book probably would have been a best seller. I mean, as much as we don’t like the trumps and the majority of people in this country don’t like the trumps, it doesn’t take a lot to get on the best seller list. In fact, it only takes about a quarter million dollars of book sales in order to do that. And for somebody like Trump, you know, selling these books at 25 bucks a piece, yeah, you’re going to find 10,000 Maga folks out there, even a hundred thousand maga folks out there willing to purchase this book. And yeah, that’s gonna put you on the best seller list. But Trump’s out there praising his son for making it onto that list when in reality, he is the one who bought most of those books.