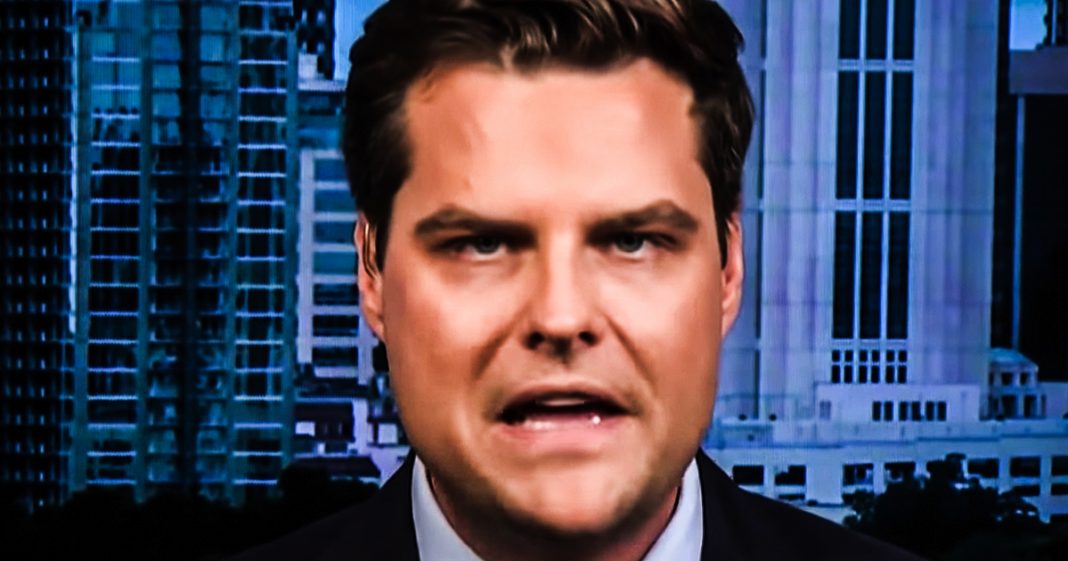 Republican Matt Gaetz is still fuming over the fact that a woman in his district threw a milkshake on him earlier this year, and he told a judge this week that the woman should DEFINITELY have to spend time in jail to send a message that this behavior is wrong. This is the same man whose own father got him out of any punishment for his DUI, but now he suddenly cares about punishments for law breakers? Ring of Fire’s Farron Cousins discusses this.

*This transcript was generated by a third-party transcription software company, so please excuse any typos.
This coming Monday. The woman who threw a cup filled with red liquid at Republican representative Matt Gates here in his hometown of Pensacola, Florida will be sentenced and earlier this week Matt Gates sent a letter to the judge because Gates is the one who actually did press charges against the woman for assault. He sent a letter to the judge demanding that this woman who embarrassed him serve time in jail. Here’s a couple snippets from a Gates’s letter to this federal judge. I asked the court to sentence the defendant to some time of incarceration. Constituents deserve to be safe at events hosted by our congressional office. My staff deserves to be safe. Their families in mind shouldn’t have to worry that while federal officials are doing their jobs, we are at risk of assault. Only incarceration allows me to reinforce to my supporters and opponents alike that free speech is welcomed, but assault will not be tolerated. If the defendant is not subject to some incarceration, then word will be out that a first assault is functionally free. This will make my events, my staff, and my constituents less safe. According to Matt Gates in his whiny little letter to the judge. Now here’s the thing, the woman and this event happened on June 1st actually just right down the street from where I’m sitting right now. Um, she threw a cup filled with what they call red liquid a, so maybe Koolaid, maybe Hawaiian punch, who knows, but she threw it on Matt Gates. The only thing hurt in that little incident was Matt Gates’s pride, this was not assault. And over the years we have seen that word assault applied to just about anything. You know, you move somebodies hand out of the way. That’s assault because you’ve touched them now like this is ridiculous. Can we calm down with what we’re calling assault? If somebody throws a punch or physically harms and other human being that is assault. This woman tossed a beverage on Matt Gates and you’d think he survived an attempted assassination attempt? The only thing hurt was his pride and his ego. And to be honest, that could stand to be taken down a few pegs. But here’s the thing, Matt Gates wants somebody who allegedly broke the law to go to jail. And this is the same guy who his daddy Don Gates, who did serve as the Florida state Senate president for many years, got him out of a DUI. At least one DUI. There’s reports that there were more than one DUIs that Matt Gates committed. Matt Gates never served time in prison. Matt Gates never felt any of the typical punishments you would get if you get a DUI here in the state of Florida because of who his daddy was and his daddy was well connected and his daddy has hundreds of millions of dollars. See, that’s a part of the story most people don’t talk about is not just, was Matt Gates highly connected here in the state of Florida because of who daddy was. And that’s how he got out of that DUI punishment. But this family has hundreds of millions of dollars. You see Gates’s daddy Don founded a health Corp, a health care company back in the 1980s and then he sold it in 2004 for half a billion dollars. But the reason he sold it is because they were actually being investigated for Medicare fraud, uh, as early as 2002 and then, uh, Gates. Don Gates was like, no, I wasn’t involved in any of that even though it was happening while I was running my company. But sure, he got off, he didn’t face any consequences. And then his son didn’t face any consequences for his DUIs. But this woman who tossed a drink at Matt Gates, they want her in prison, locked away to protect his constituents. I got to tell you, I am one of his constituents and to be perfectly honest with you, I actually feel a little bit safer knowing that this woman is out there on the streets. I like her. She’s a hero. I feel safer walking down to get lunch knowing that this woman might be out there ready to throw red liquid on any Republican politician who comes down here to pander and mislead the people in my district where unlike Matt Gates, I have lived and was born here. All right. I know this area a little bit better than Matt Gates and it warms my heart to know that there is finally some other folks that aren’t me or the rest of the ring of fire crew who understand what a scumbag Matt Gates really is.