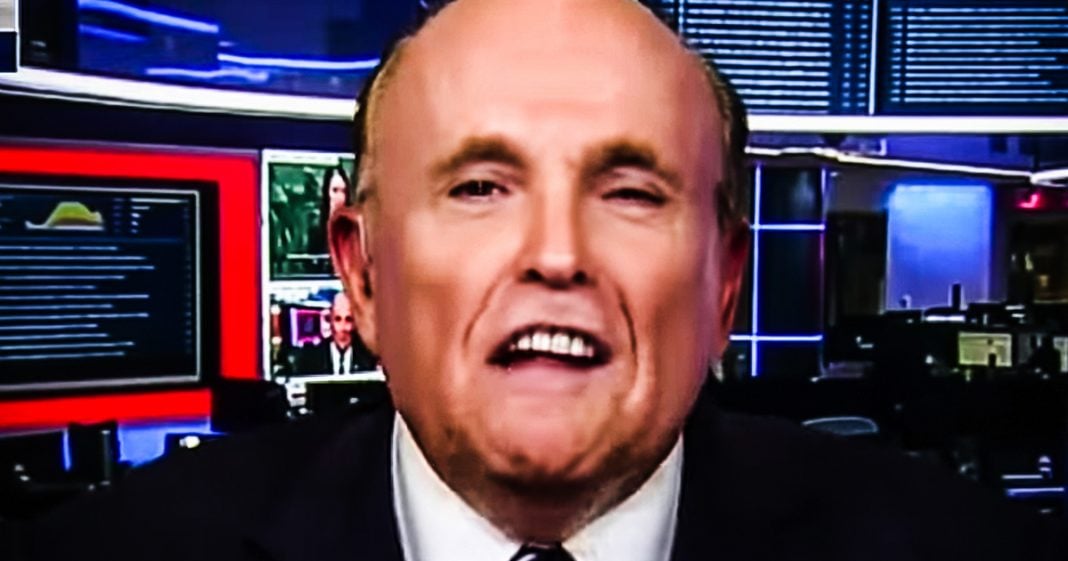 Rudy Giuliani still doesn’t think that Donald Trump is going to throw him under the bus to save his own skin, but Giuliani also jokingly told a reporter this week that he has “good insurance” in the event Trump decides to do that. Giuliani’s lawyer immediately had to jump in and say that he was joking about that, but the truth is that Giuliani does know everything about the Ukraine scandal. Ring of Fire’s Farron Cousins discusses this.

*This transcript was generated by a third-party transcription software company, so please excuse any typos.
Earlier this week, Rudy Giuliani, Donald Trump’s attorney gave an interview to the guardian where the guardian asked him, point blank, are you worried that Donald Trump is going to eventually throw you under the bus? And here is what Rudy Giuliani said in response, I’m not, but I do have very, very good insurance. So if he does, all my hospital bills will be paid. Now, here’s the thing. Immediately after saying that, Rudy Giuliani’s lawyer, who was also on this call with the guardian reporter jumped in and said, that’s just a joke. He’s, he’s being funny. Don’t let you know. Don’t read into that. So it could’ve been a joke, a about literally being hit by a car and having good insurance maybe, or it could have been Giuliani saying, yeah, I’m not worried about him throwing me under the bus because I know a little too much about everything. And here’s the thing, Rudy Giuliani does know about every single thing. You know, the first day of the impeachment hearings. That’s what we gathered. We were told by these people that Giuliani at the behest of Trump was running this kind of shadow foreign policy. Giuliani’s in the thick of it. So yeah, I’m willing to bet he does have pretty good insurance here. And what’s interesting, the reason the guardian even asked this question is because we have seen plenty of reports coming out over the last few weeks that the new Republican strategy is to blame everything on Giuliani. Say that he was some kind of rogue actor along with all these ambassadors and diplomats and whoever else, the deep state folks too. They were all doing this by themselves and Donald Trump was sitting up here like a blithering idiot. Completely oblivious to everything that was happening. That’s actually their defense. That Giuliani was the guy. but everybody’s already testified the Giuliani. Yeah, he was the guy, but he was doing it because Donald Trump told him to before this is all over. Rudy Giuliani is going to be thrown under that bus and at that point he better pray. He has some good insurance because if he doesn’t, then yeah, every Republican in the house in the Senate is going to turn on him and paint him as one of the biggest villains in modern American politics. So Giuliani, if you don’t necessarily have your insurance up to date at the moment, maybe it’s time to go back and revisit that policy, gets some additional coverages here and there, if you know what I mean. Go ahead and print everything out, make some copies of it, and hand it over to your attorney today because if you don’t, when those Republicans do finally throw you under the bus, you won’t have any insurance at all.