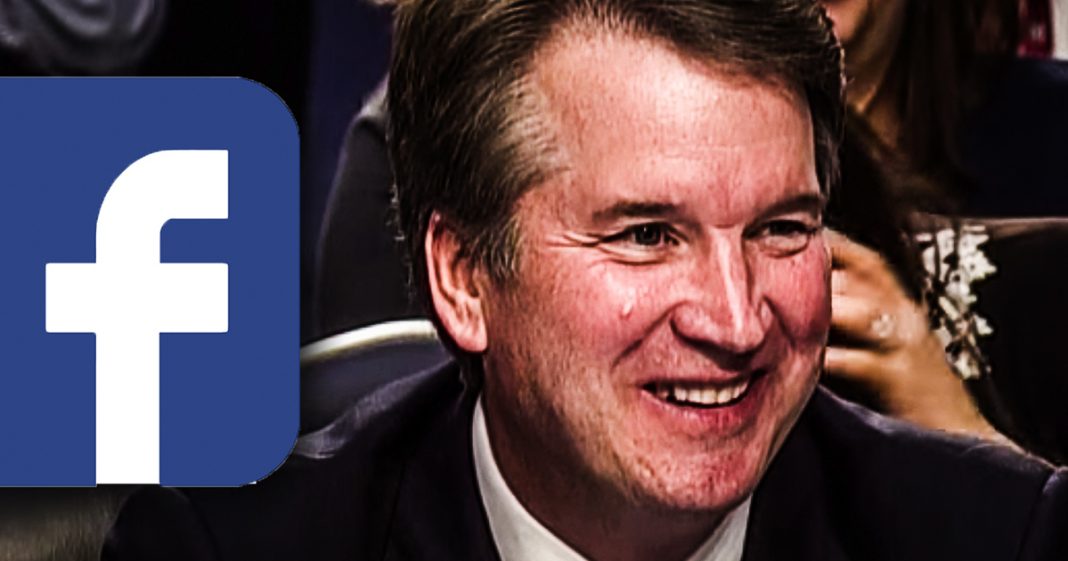 There should be absolutely no doubt left in your mind that Facebook is a right wing company. Like most giant corporations, Facebook only cares about protecting their profits, and that’s the main reason they were a “Gold Circle” sponsor for The Federalist Society’s annual event that featured Supreme Court Justice and noted beer-lover Brett Kavanaugh this week. Ring of Fire’s Farron Cousins explains Facebook’s motives and why we should never trust them.

*This transcript was generated by a third-party transcription software company, so please excuse any typos.
Last night, the right wing Federalist society held their annual event, the Scalia dinner, and they had Supreme court justice and noted beer lover Brett Kavanaugh as their featured speaker. So this pretty much was a Brett Kavanaugh centric event that the Federalist society put on and one of their top tier gold circle sponsors of this event was none other than Facebook. You see, the Facebook vice president of global affairs actually happens to be an old friend of Brett Kavanaugh, sat right behind him during that hearing last year and defended him any and every chance he got, including to his own employees who didn’t buy his defense that I’ve known Brett Kavanaugh for 20 years and didn’t see him rape a single person. So he must be a good guy. But here’s the thing, Facebook sponsoring this event, they were the only tech company to be listed as a gold circle sponsor, meaning they gave a lot of money to this. There is a reason for this. First and foremost, Facebook is a rightwing company and you cannot convince yourself that they’re not. They really and truly are down to their core, just like every other corporation in this country. And here’s why. Cause it’s all about the money. It’s all about the money. That’s why Facebook showed up there as a gold circle sponsor to this Federalist society event last night. And the reason they want to give money to these groups like the Federalist society who’s working with Mitch McConnell to tell Donald Trump which judges to appoint across the country is because Facebook wants to say in that Facebook wants to make sure that no judges get appointed in this country who are going to do things like, Oh, I don’t know, break up the tech giants file antitrust suits against them, force them to comply with labor laws. these are all things that Facebook has been accused of violating on top of many, many more. Facebook has some very serious litigation and legislation in their future, all of which is going to be very horrible for the company. So that’s why they’re doubling down on funding, right wing politicians because they know those people are a little bit easier to buy off then the Democrats. Now, I’m not saying Democrats can’t be bought off. They absolutely can. It’s just easier to by Republicans because Democrats, at least most of them have some kind of conscience. So it takes a lot more money to silence that inner voice. Republicans have none and that’s why they can give them a little bit here, a little bit there and suddenly everybody in D C is Facebook’s best friend. As long as you have an R next to your name and that’s what Facebook is counting on. They are a corrupt, diseased, right wing corporation and we are going to see them become truly one the biggest power players in American politics over the next couple years. They’ve been doing it for the past few years, but we’re about to see this explode because you have democratic candidates right now openly calling to break up the tech giants and Facebook is right there at the top of that list and they can’t let that happen. So they’re going to fund the Federalist society. They’re going to fund right wing politicians. They’re going to rely on their friendships with their friends in high places like Brett Kavanaugh. Not because they care about politics so much, but because they care about their own money. It always comes down to money. And that is what Facebook is fighting tooth and nail right now to protect, and they don’t care if it ruins their public image in the process. Their employees are pissed off and rightfully so. They want the company to do better. They want the company to be better. But instead, Facebook at every given opportunity is bowing down to Republican pressure and Republican politicians because at their heart, Facebook is a Republican company.