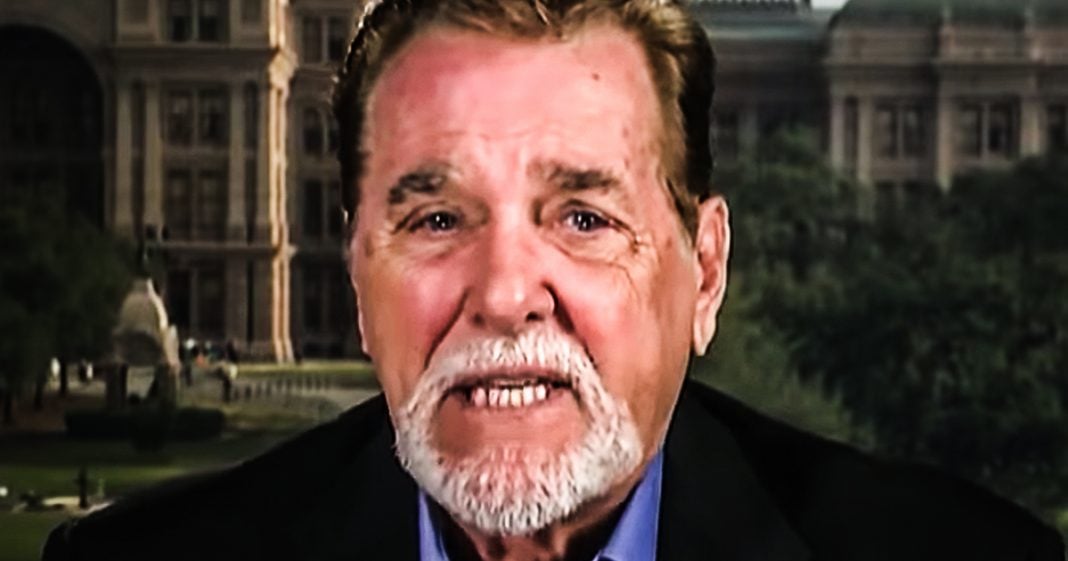 Washed up game show host Chuck Woolery has been an outspoken supporter of Donald Trump since the very beginning, and Woolery recently told Fox News that this support ruined his career. While that probably makes for a good soundbite for the MAGA crowd, the truth is that Chuck hasn’t actually worked on anything since 2008, when he hosted a game show for cats. Ring of Fire’s Farron Cousins explains why Woolery is so whiny today.

*This transcript was generated by a third-party transcription software company, so please excuse any typos.
Earlier this week, washed up game show hosts Chuck Woolery appeared on Fox and friends where he told Brian Kilmeade that supporting Donald Trump has absolutely destroyed his career because of all of these anti Trump folks out there calling his sponsors and the people that he works with telling them to dump Chuck because he supports Donald Trump. Then later after that interview, Woolery got on Twitter to double down on this. He said, yes, I have pretty much destroyed my career by openly supporting Trump and letting all know I am a conservative, painful at times, but true after all is said and done, it was my choice and I can live with it. I would do it all again. If you would do it all again, then why are you out there whining about it today? But here’s the thing folks. Yet Chuck Woolery does, I guess have a couple of like sponsorships and people he does commercials for or did and that’s what he’s complaining about. For the most part. You know that these folks on Twitter see that he’s out there Hawking supplemental, uh, life insurance and so they call it the company and say, Hey, you’re a having a guy on here who supports one of the worst presidents in history. They go through the laundry list of horrible things Trump has done and the things he stands for and they say, please fire Chuck Woolery. Nothing wrong with that. We’re allowed to do that. But here’s the thing, Chuck, the reason you’re doing those supplemental life insurance commercials and whatever thing you’re Hawking for the day that they only show on daytime TV when they know nobody’s watching. The reason you’re doing that is because your career died years ago, long before Donald Trump ever even ran for president Chuck Woolery, his most recent paid gig hosting gig on an actual television was in 2008 and do you know what it was? It was a game show for cats, a game show for cats that lasted one episode. It was allegedly just a special sponsored by Meow mix. And here is the description of what that show was that Woolery hosted one episode of in 2008 eight cats and their owners compete in the contest which includes contestants playing games with their cats, showcasing their knowledge of cat based trivia and their relationships with their own cats and this was 2008 so seven years before Donald Trump even said, I’m going to run for president. That was the last paid television gig that Chuck Woolery had prior to that from 2002 to 2007 he hosted lingo on the game show network and he was then replaced by Bill Ingval. Before that it was couple of games shows here or there in the 90s mostly games shows late seventies throughout the 80s when he hosted love connection. That’s the extent of your work, Chuck. I wouldn’t even necessarily call that a career you scrounge around hoping somebody is going to come up with a new game show and then dial you by accident. Here’s the other part of it. I am sick and tired of hearing these conservatives whine about supporting drug destroyed my career because that doesn’t happen. It happens to horrible actors who want an excuse as to why they’re not getting work. Kevin Sorbo yeah, you’re not getting work because you suck. Not because you hate Donald Trump. Chuck Woolery, you’re not getting hired for TV because nobody cares about you anymore. You’re 78 years old. Most people in the planet think you’ve already died. Pat Sajak, avid Republican, and has been for years, openly attacked us at air America with an op ed, uh, 12, 13 years ago. Denies climate change, has a huge misogynist. He still hosting wheel of fortune every night of the week. His career hasn’t suffered at all from being a hardcore conservative. Tim Allen. Yeah, he, his show got canceled from one network. Then it got picked up by the other. He’s still making millions off that show. Last man standing in syndication. He is doing just fine. Clint Eastwood haven’t seen his career slowing down. Right. So Chuck, how was it that other conservatives could survive just fine, but you, whose last job was hosting a game show for cats? You think it’s all because of Trump? No. Maybe it’s because you just don’t have any talent.