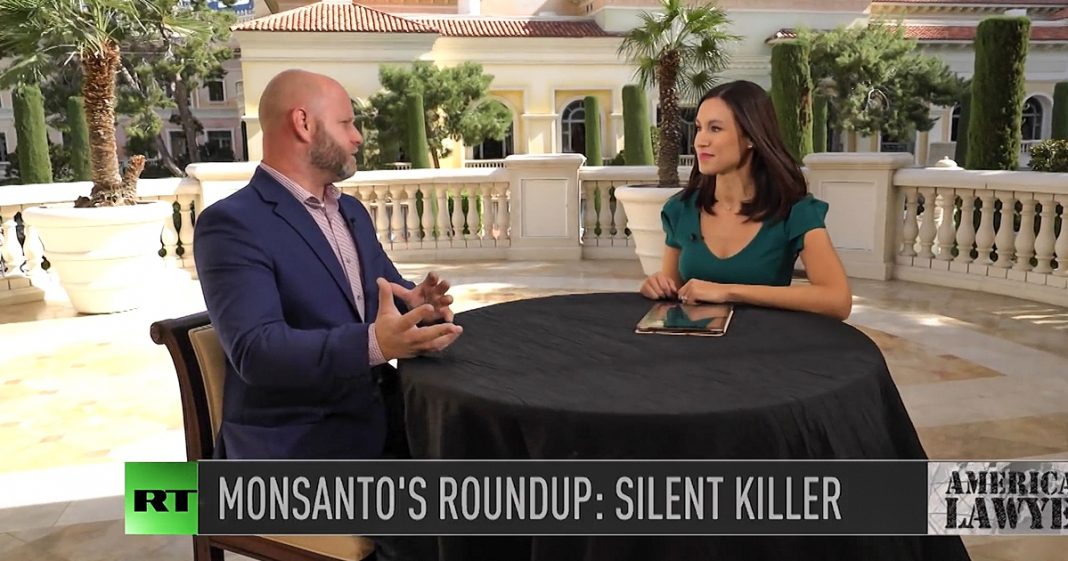 Via America’s Lawyer: Filling in for Mike Papantonio, RT Producer Brigida Santos guest hosts this week’s special episode from the Mass Torts Made Perfect conference in sunny Las Vegas! Trial Lawyer Magazine executive editor Farron Cousins and Brigida talk about the corporate strategy Bayer-Monsanto has taken in response to over 18,000 lawsuits being filed against the manufacturer of cancer-causing Round Up weedkiller.

Brigida Santos:                   I’m joined now by Farron Cousins from Trial Lawyer Magazine and he’s here to discuss the latest with the Roundup litigation. All right, so first of all, a mediator is currently trying to work on a potential settlement between about 18,000 plaintiffs in America who claim that Roundup has contributed to or caused them to get cancer. The latest trial that was scheduled for October has now been postponed. What do you think about this postponement? You know, Bayer, it’s their decision to postpone it. So do you think they’re going to work on a settlement? What does this mean for them?

Farron Cousins:                  I think they want the public to think that they’re working on a settlement. I don’t think, at least as it stands right now, there’s one of the pipelines. I think what they’re trying to do is they’re trying to buy a little time, whatever strategy it is they’ve been employing in courtrooms, clearly not working. I mean, they’ve been hit with some massive jury verdicts. So they want to regroup. They probably want to take a little bit more time and use their influence in the media with the politicians, with the regulators. Maybe see if they could do something that way to make these cases go away, that’s not going to involve a settlement. So there’s brilliant lawyers working, working on this. The settlement could be possible, but I don’t think Bayer Monsanto, I don’t think they’re there yet. I think they’ve got to get hit a lot more times. They’re hugely powerful. Tons of money, and if they don’t get hit enough, they’re not going to back down. So this thing could go, you know, the whole 13 rounds here, and I think that’s probably more realistic as to what we’re looking at.

Brigida Santos:                   Yeah, more and more people have been getting cancer and saying that it’s due to Roundup use. You know, as I said, there’s 18,000, but JP Morgan chase analysts there say that they are expecting about 45,000 very soon that could be hit. So more and more people are obviously learning about this, but my concern is that even if they do settle, it will be a slap on the wrist for Bayer Monsanto. They’re not going to have to, it’s not going to really impact their bottom line very much.

Farron Cousins:                  Absolutely, and that’s what we’ve seen, you know, in, in pretty much all of the cases. Really all consumer cases, it is typically you did wrong, you made X amount of money from it. We’re only taken Y amount out of it, so you still walk away with 90%, 80% of the profits that you’ve made on this deadly product for decades. And that’s going to be what ends up happening here, unfortunately, because of the regulatory capture that we’ve had, the people, they influence ,the lobbying money, we’re not going to see any systemic changes. So what’s going to happen most likely, even with a settlement, even if they tried and lost all 45,000 cases, Roundup’s still going to be on store shelves. What’s going to happen maybe is that we might get a little warning label, you know, years down the line, but they’re not going to change their behavior because it’s still profitable.

Even when you lose in court, you still have so much more sitting in the bank that they’re not going to stop. And that’s the part we really have got to do something about. And that has to obviously come from the regulators, from the federal level, the government, the trial lawyers do what they can here. And they’re trying to make these victims whole. But the goal of all of it, everything they do is to change the system. And back in the day, that used to be how it was, you know, with the, the Pinto litigation, the tobacco litigation, they changed the system. So people started buying the system and now you can’t change that as easily anymore.

Brigida Santos:                   Yeah. So let’s talk about the regulatory capture. California, Bayer lost three trial lawsuits. So the three juries decided against them saying that in California they should be warning people on labels that this product could potentially cause cancer. You know, proposition 65 in California requires certain chemicals to be listed on, on that list. This is potentially one of them, but because the EPA fought back and said that there is no research to support the science that it is harmful, they have now prevented any companies in California from putting those labels on. Why is this happening when the world health organization’s international research for cancer says otherwise? They say that it is a carcinogen.

Farron Cousins:                  Right. Well, all of the major real studies that have looked at this have come to the same conclusion. You know, you, you’ve got your, your non Hodgkin’s lymphoma, all sorts of other cancers, other endocrine problems, you know, nervous system issues. There was a great article on eco watch several years ago. It listed out more than two dozen diseases and illnesses that had been linked to glyphosate exposure. And all of those were independent scientists doing these studies coming forward and saying, hey, this is what we found. This is bad. Monsanto on the other hand, Bayer Monsanto, but just Monsanto back in the day, they started the glyphosate task force where they had their own personal scientists going out there and just saying, no, no, no, this stuff is safe enough to drink. And then when they asked executives over at Monsanto, hey, would you drink a glass of it? That’s when they, oh, it well of course not.

That’d be, you know, suicide. Well they didn’t say that but, but they understand what it is. Then they use this group called AgBioChatter. It’s kind of like a list serve and it lists all these industry friendly scientists and lots of different corporations use this and they go through there, they find one, okay, this is a guy who specializes in this. He’s willing to say things that are not true. We just have to pay him the money. He’ll put his name on this study or he’ll conduct a study for us that we know is going to be favorable. Those are things we found out so far through documents that have been released through these lawsuits. These are all things that have happened. You know, and I, I think the public has to understand that. We’re not sitting here speculating on any of this anymore.

We know for a fact all of these have happened. They, there is this list of scientists, AgBioChatter. People need to look at that. It’s disgusting. But that’s how these corporations do it and they have more, more freedom, I guess more access to media. They have more access to buy advertisements. You know, the, the, the guy out there who got cancer from this, he can’t do any of that. He can’t go out there and tell his story to, to the New York times. Monsanto has already, you know, paid for advertisements there. And so that’s why Monsanto has the louder voice and is able to create this confusion over well, maybe there’s not, maybe there is. No, there definitely is. Don’t buy into the propaganda.

Brigida Santos:                   Sure. And Bayer obviously knows that it’s problematic to be associated with Monsanto. You know, it ditched the Monsanto name after it acquired it for $63 billion. But unfortunately it did inherit all these problems, 18,000 of them now with these lawsuits, and that’s only in the United States market. You have people now in Australia and elsewhere, bringing lawsuits as well over glyphosate based products. And then the European Union, you know, the license runs up in 2022 and now they have to try to renew that license, Bayer does, to get these products back out there on the market. I’m not sure if that’s gonna happen.

Some of the countries said that they’re going to back away from this, but this is an industrial product. Bayer is still committed to Roundup. They say that they might be trying to develop new technologies for controlling weeds, but the same thing could happen that we’ve seen with water contamination, the PFAS. They might just change the chemical chain slightly and then you’ll see another round of problems down the line that are very similar.

Farron Cousins:                  Right. And unfortunately when that happens is that those problems, you’ll go 30 years before they emerge. So Bayer gets, you know, 30 years of saying, look, we’re better, we’re cleaner, we’re doing things the right way, everything is okay. And by the time the problems start emerging from this new product, whatever it will be, because you’re right, they will do this, eventually. The CEO will be gone. All the board members who were there when they created it, they’re gone, and it’s a new group of people who have to deal with this new problem. They’ll do the same thing then. This is unfortunately, it’s cyclical. We have seen it. We see it with tobacco companies now running the vaping companies while pretending they’re not involved in any of it.

Farron Cousins:                  And it’s the same thing with a lot of these pharmaceutical cases too, because you’ll have smaller companies that actually develop these drugs. They get hit with lawsuits when people start dying from them, the big pharma giant comes in, buys them quietly, gets rid of these lawsuits. Same story, different product all the time. I mean, it’s, it’s really sickening when you start, you know, really paying attention to all these issues to see that it just always stays the same. You see the same people come out there, they’ll switch companies, go to this one, do the same thing. Get absorbed over here, then they’re kind of a shadow board member. It’s really a disgusting incestuous thing with all these corporations.

Brigida Santos:                   Yeah. Well, I’m really glad you joined me today to talk about this because we have to combat, you know, their propaganda on the other end. We have to share with the viewers the dangers of these products so that they know. Because again, this is sold, you know, at Home Depot, you can just go there and get it. And people tend to think that if it’s sold on shelves then it’s not going to be harmful, but it is. So thank you, Farron Cousins, for joining me today.