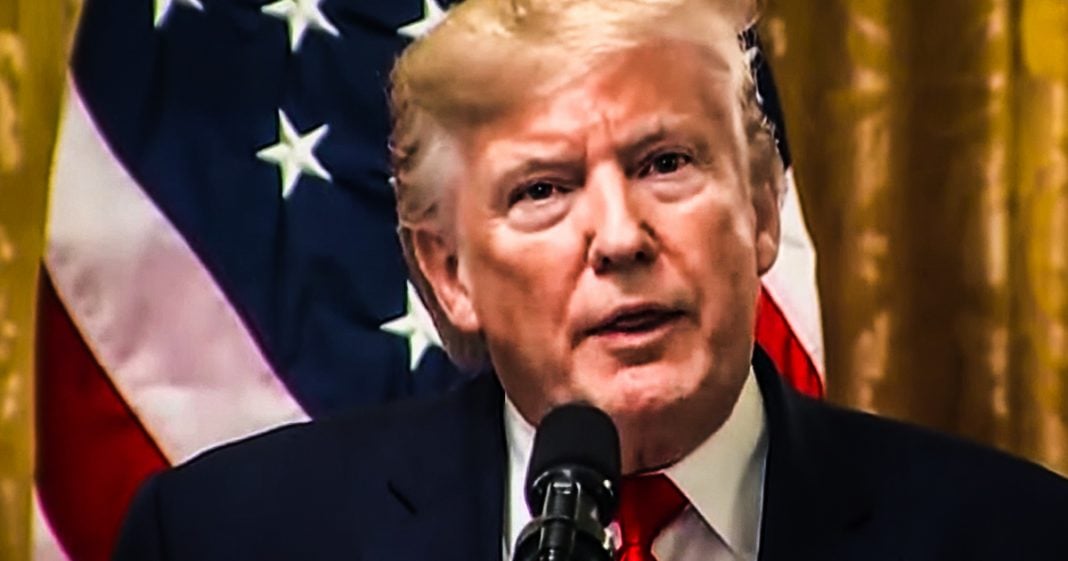 A District Court of Appeals ruled yesterday that Donald Trump’s lawsuit to stop the release of his tax returns cannot move forward, meaning that the President either has to appeal to the Supreme Court or hand it all over. Eight of the eleven judges on the court voted to stop Trump’s lawsuit, and he has nowhere to go but to SCOTUS now. Ring of Fire’s Farron Cousins explains what’s happening.

*This transcript was generated by a third-party transcription software company, so please excuse any typos.
On Monday. Donald Trump got some really bad news from a district court of appeals in DC when they told him, and we discussed this at the time, that no, you can’t sue to stop this New York investigation seeking your tax returns just because you claim there’s some kind of conspiracy that ain’t going to happen. Yesterday, on Wednesday at another district court with 11 voting, judges voted eight to three to stop a lawsuit by Donald Trump and his lawyers that was trying to prevent Congress from getting their hands on Donald Trump’s tax returns. That eight to three vote by this panel of district court judges said, yeah, you can’t Sue to stop this, so we’re putting the brakes on your lawsuit right now, which means Donald Trump and as lawyers have two choices, one, either they say, all right, we’re a bunch of losers. Let’s hand over eight years of our tax returns to Congress or to they say, let’s double down again and take this to the U S Supreme court. Those are the only two options this man has left. Remarkably, those are also the only two options he has left. On the other side too, for trying to prevent his tax returns from going to the prosecutors in New York. So folks, we are set up for a massive constitutional showdown right now as both of these separate cases. We’ll be heading to the U S Supreme court and as I’ve discussed, and I’m going to go ahead and mention against Supreme court can do basically one of three things. One that they declined to hear it all together and then that’s the end. The district court ruling stands, Trump has to turn it over or go to jail. Two, they hear the case, they say, listen, we don’t want to get involved with the trying to limit Congress’s subpoena power. That’s really not what we do and we actually can’t even do that. So therefore we’re ruling against you, Mr. Trump, or three, the conservatives on that court band together say to hell with the constitution. We’re siding with Donald Trump. Those are now the only three options. If Donald Trump takes this to the Supreme court, if he chooses not to, again, he’s got two options there. He hands it over or he goes to jail. That’s it. That’s all this guy has left. But here’s the thing and this is what I want the uh, you know, Maga hat crowd to honestly answer why is he hiding this stuff? What is in there that is so bad that he doesn’t want prosecutors to see? Cause keep in mind folks, this is not, you have to release them to the public. We still don’t get see them. This is handing it either to these congressional committees so they can take a look and make sure there’s nothing screwy in there because Michael Cohen did say there was, and that’s their grounds for doing this or up in New York, the prosecutor’s there, they’re not going to release that to the public either. But they’re also a lot based on Michael Cohen. Again, trying to find out how Donald Trump wrote off those expenses for paying off the porn star that he had sex with and the likely claim them as legit legal expenses, which, Hey, tax fraud right there. So yes, they also have legitimate claims to Donald Trump’s tax returns. So again, begs the question, what’s he hiding? Aside from the very, very obvious, which is exactly what Congress and the prosecutors in New York suspect him of doing. But if that’s it, come on. That’s small potatoes, right? I mean, he can get off with that. He can get away with it. He can sweet talk his way out of that. There must be something worse. There has to be something worse because keep in mind, he was blocking these tax returns from going public before any of us even knew any of this. So what is in there? We will find out one day, but that day may be so far in the future. The Donald Trump at that point is nothing more than a footnote in American history textbooks.