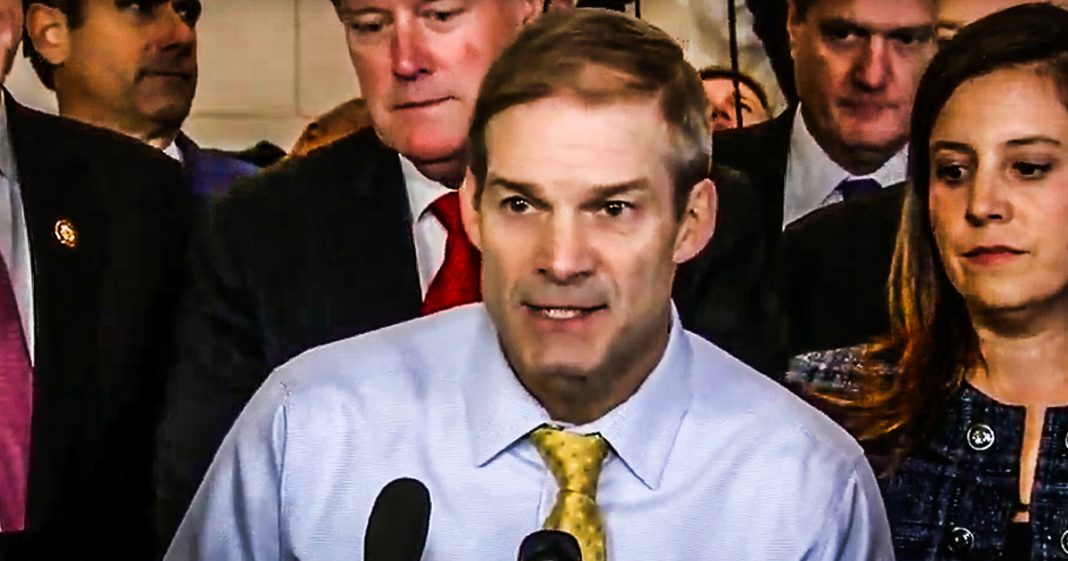 Republicans walked away from Wednesday’s impeachment hearing believing that they had won the day. The truth is that they didn’t corner any witnesses, they didn’t contradict any testimony with facts, they just sat there monologuing the entire time about how stupid the whole thing is. Ring of Fire’s Farron Cousins explains how Republicans struck out on day one, and why that sets the stage for even more failure down the road.

*This transcript was generated by a third-party transcription software company, so please excuse any typos.
One of the most fun things that happened yesterday during the impeachment hearings is that Republicans left those hearings thinking that they actually won. Conservatives on Twitter we’re hailing people like Jim Jordan saying, you crushed it bro. You did it. Heck yeah, man. Fox news was saying it looked good for Republicans. Then you had other Republicans saying, Oh, the whole thing was a snooze Fest, which is actually the word that I think Eric Trump used to describe it. But nonetheless, Republicans walked away thinking they won the day and nothing could be further from the truth. I mean, we got the testimony from Taylor saying that Sawnland’s account of things has revised account of things, does mesh with what everybody else had to say. And even though Taylor and Kent did not have firsthand knowledge of the things that had happened, their accounts of things had been corroborated by previous closed door witnesses in the other hearings. So I know Jim Jordan wanted to hammer on this, so you didn’t know. You didn’t hear this. You got it from a friend who got it from a friend who heard it from another, that there was quid pro quo, but Taylor’s testimony had already been corroborated as had Kentz and Jim Jordan knows that what Jim Jordan and the other Republicans were trying to do was to put on a show for the American public. They know that these people are not lying. They know that the men yesterday did not lie to them, but they have to make the public think that they did think that they’re not trustworthy. Think that maybe they don’t know what they’re talking about because if they can convince the public that these men are not trustworthy or maybe they’re confused, then they have a little bit of an edge. Right. You know, they can say, Hey, well listen, this guy wasn’t actually there, so how can we believe what he had to say. Well, because he worked around the other people who were there and those other people also said the same thing. And he talked to them, not just because he’s their buddy and he walked up to their desk and said, Hey, what are you guys doing for lunch today? You heard any quid pro quo before the morning knows? No, because they talk about these things because it’s part of their job. They knew what each other were doing. They were all a part of this. But Jim Jordan doesn’t want you to know that Jim Jordan wants you to think that this is some guy who was just walking down the hall and maybe he overheard something that he got construed or misconstrued in his head and now he’s here trying to impeach the president. How dare he. Right. And that’s why Jim Jordan was put on the intelligence committee at the end of last week because he doesn’t mind making a fool of himself. I mean, that’s pretty much been his entire life. And that’s also why Jim Jordan is facing some legal problems of his own right now because he is a, because he doesn’t like to see the truth and he likes to cover things up and pretend like nothing is happening around him. He did it at Ohio state and now he’s doing it during these impeachment hearings, and this is just the beginning folks, and I know Jordan wanted to paint Taylor as the star witness, but no Taylor’s not the star witness. I think the star witness is going to be Gordon Sunland or perhaps Mike Bolton or perhaps Mick Mulvaney or you Bonovitch who’s coming up on Friday. Yesterday was just the beginning and Republicans looked confused. They looked scared and they looked desperate. They spent most of their times a rattling off their own talking points rather than actually questioning the witnesses. That’s why at one point, Taylor just started laughing at what Jim Jordan had to say because it was laughable. It was cartoonish, it was immature, and it had no bearing on what was taking place in that hearing whatsoever. Yet for some reason, Republicans still walked out of there thinking that they were the victors in yesterday’s hearing. And you know what? Let them think that, let them get that false sense of security. Because let me tell you what actually happened in addition to the damning testimony about what Trump did. What also happened was that Democrats on the committee all over the country really got to see the Republican strategy, and they know now that that is all they have trying to muddy the waters rather than actually deal with the questions at hand. And now Democrats have a day off before the thing resumes tomorrow, and I guarantee you we’re going to see some fireworks coming out of those Democrats as they completely dismantle the pathetic arguments coming out of the Republicans.