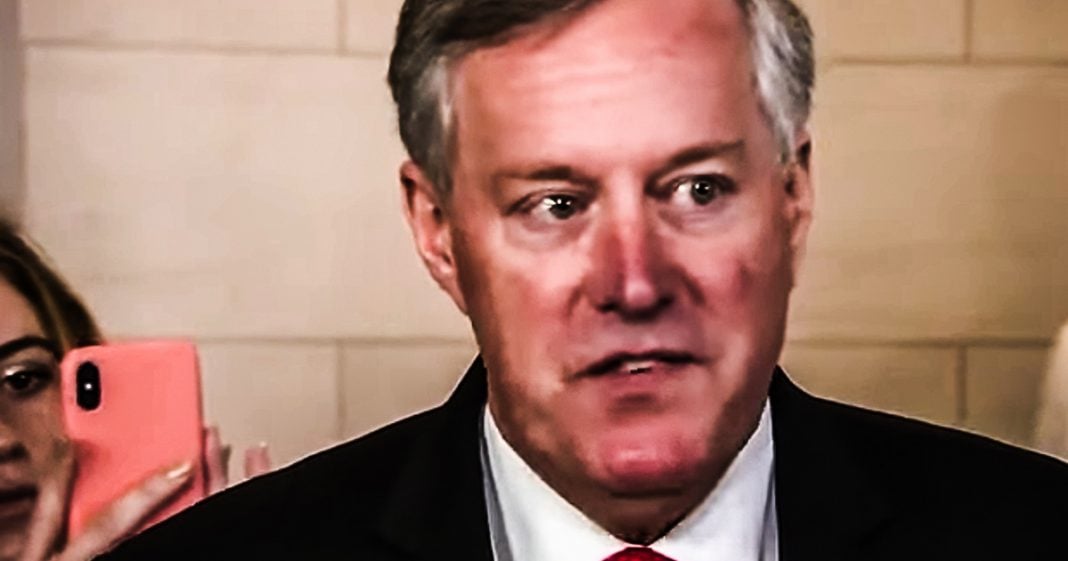 Republican Representative Mark Meadows told reporters after day one of the impeachment hearings that everyone can have a different opinion of what the “truth” actually is, showing that Meadows doesn’t actually understand the meaning of the word “truth.” There is only one version of the truth, and right now that version isn’t jiving with what Meadows and the Republicans want, so they will continue to lie and mislead the public about what’s happening. Ring of Fire’s Farron Cousins discusses this.

*This transcript was generated by a third-party transcription software company, so please excuse any typos.
After yesterday’s impeachment hearings concluded, Republican representative Mark Meadows had the opportunity to speak with reporters about what had happened throughout the day and you know, rather than really address what happened and you know, talk about the fact that yeah, it was a bad day for Republicans Meadows instead decided to tell reporters that there’s lots of different versions of the truth. Now here is the exact quote from representative Mark Meadows. You know, it’s amazing. He was prepping to come up here talking about Taylor. He prepped for hours to come up here. Then all of a sudden he gets this miraculous intervention from one of his staffers that reminds him of something. Does it concern me? No. I think what happens is when we start to look at the facts, everybody has their impression of what truth is. Just like you as reporters have your impression of what truth is. Um, no. Mr. Meadows, truth is the truth. You don’t get to have an impression of the truth. You don’t get to have your own version of the truth. You don’t get to have your own reality where your truth is truth in somebody else’s truth is fake. Truth is the truth. I mean, look, this actually really reminded me of the Clinton impeachment where everybody for months and months, years really was harping on Clinton when he was like, well, it depends on what your definition of the word is, is you know, we rag on that guy because he champion challenged the definition of the word is, well, Mark Meadows is trying to one up him here trying to say, wow, there’s, you know, different, uh, interpretations of the truth. There’s different impressions of the truth. Depends on what your definition of truth is really is what this boils down to. We are watching history repeat itself. Both folks, both with the Clinton impeachment and the Nixon impeachment here, except that in both of those instances you had two parties that both seemed somewhat competent in either attacking or defending the person being impeached. Now we’re dealing with only one side that’s only mostly competent, which is the Democrats and the Republicans who have no idea what they’re doing. They don’t. That was one of the biggest takeaways I had yesterday was that Republicans have no idea what they’re doing. They don’t know what they’re saying. They don’t know what they’re going to do. As this moves forward, they don’t know how to handle damning information when it comes out. So instead they walk out of that room, they walk up to reporters and say, well, depends on what truth actually is. Can any of us know the truth? Is the truth out there? What is truth? What are we? No. Stop with your little existential crisis there. Representative Meadows, and deal with the fact that what we got yesterday was indeed the truth. But what you’re telling reporters and your Republican supporters is that it’s a physical impossibility to know exactly what truth is. Now, we learned a lot of truths yesterday, and just because they didn’t jive with whatever it is you’re trying to convince yourself, that doesn’t mean that it’s not actually the truth.