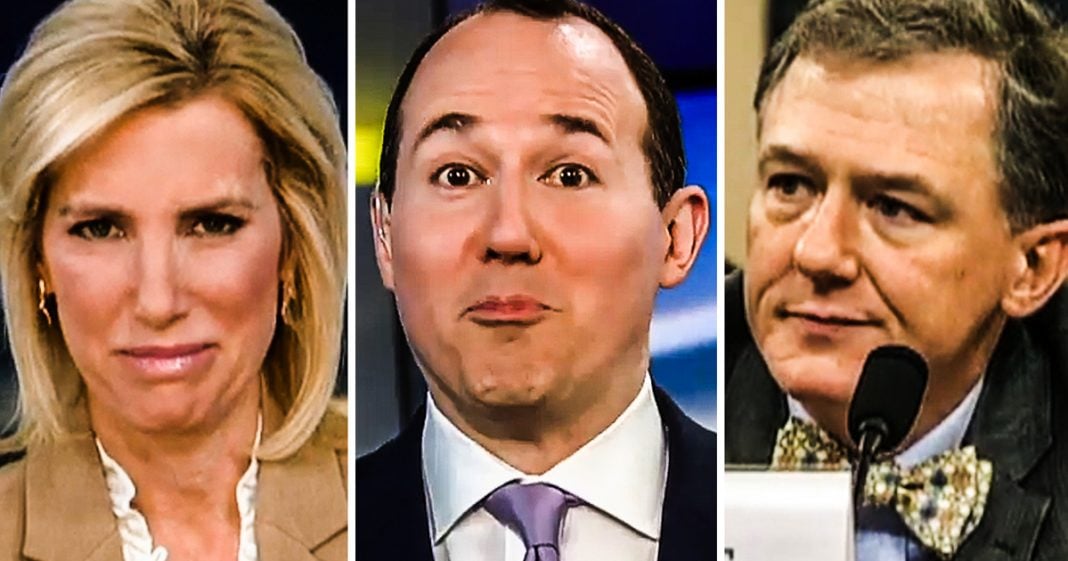 Fox News has uncovered the biggest scandal ever from the impeachment hearings! That scandal happens to be the fact that former State Department official George Kent…drank a lot of water. That’s it. That’s the scandal. Fox host Lauran Ingraham and her guest spent far too much time attacking this man for his water bottle, while ignoring what actually happened at the hearing. Ring of Fire’s Farron Cousins discusses this.

*This transcript was generated by a third-party transcription software company, so please excuse any typos.
Well, it didn’t take Fox news long to find the real scandal yesterday during the impeachment hearings. And that scandal happens to be that state department official. George Kent, who was one of the witnesses on a Wednesday, drank a lot of water and he brought a really big water bottle with him. And according to Laura Ingram and her Fox news contributor guess that was the biggest scandal of the day. Here’s what they had to say about George Kent and his water drinking.
[He drank a lot of water. Lauder, Laura. I mean fish are not this hydrated look. He’s always taking slow look throughout the hearing. Took slugs. Is he on the treadmill with a water bottle? Do you guys see? It’s amazing. It was like a medical size waterbottle. Had it hit it and the oxygen chamber water silo.].
If you watched yesterday’s impeachment here and you’ll listen to the uh, testimony, you again, you listen to the testimony of Taylor and your biggest takeaway from any of that was that man, that George Kent fellow drank a lot of water. Then I think it’s safe to say you miss the entire point of everything that happened on Wednesday during that hearing. You know, here’s the thing, and this is why it kind of bugs me a little bit that the Fox news people were harping on this, but of course they don’t want to talk about the real issues because that makes them look bad, but there’s lots of reasons why people would be drinking, you know, bringing their own water bottle in instead of relying on the little cups they provide you there at the hearing. Maybe he’s having to monitor his water intake. Maybe he has a medical condition that requires him to drink a lot of water or a certain amount of water, which would explain why he has the water bottle with all the markings on it. Maybe he’s just chronically dehydrated and he’s trying to to fix that. Maybe he’s got some, some supplements in there because he knew he’d be there for hours or maybe the guy just likes to stay hydrated. I mean really it doesn’t even matter. He, he had a big water bottle and he drank some water. But again, Fox news is talking about that because they can’t talk about what actually happened at the hearing. Cause that’s gonna make their guy look bad. Trump. Because in spite of what Republicans are telling you yesterday did not go very well for them or for the president himself. But that is a conversation for a different time. As these hearings continue, we’re going to see Fox news host continue to grasp at these straws trying to nitpick little things they see happening in the hearing. Maybe somebody drank too much water, maybe somebody’s tie was a little crooked. Maybe their jacket didn’t match there a, you know, pocket square. Who knows what it will be. But it will continue to be this ridiculous because they have no actual defense of the president. And what all of these witnesses are telling us. The president did.