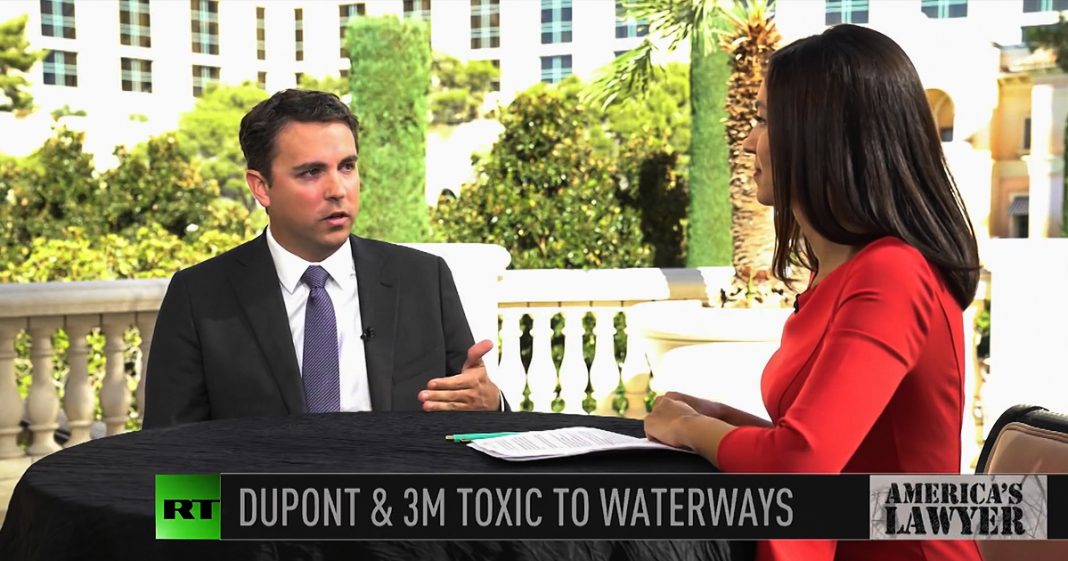 Via America’s Lawyer: Filling in for Mike Papantonio, RT Producer Brigida Santos guest hosts this week’s special episode from the Mass Torts Made Perfect conference in sunny Las Vegas! Brigida sits down with attorney Wesley Bowden to discuss PFAS contamination of our drinking water and household products. Lawsuits allege industrial giants like DuPont and 3M have known about the health hazards of PFAS for decades, and have also failed to properly dispose of chemical waste from PFAS processing, which will remain in our environment for tens of thousands of years.

Brigida Santos:                   Hi, I’m sitting down with Wes Bowden and he’s an attorney at Levin Papantonio and he handles PFAS water contamination litigation. Thanks for being with me today.

Wesley Bowden:               Okay. Well, PFAS is a group of chemicals that have been used for about the last 50 years in our country. They’re highly stable compounds. They’re all manmade, but once they get out into the environment, they really never go away. And what we’re finding now is that a lot of these chemicals are winding up in our nation’s water supply. We’re just now finding out about it as consumers. But what we’re learning in this litigation is that industry has known for a very long time where to find these chemicals and just how persistent they were going to be.

Brigida Santos:                   Now, these are industrial chemicals that are in waterproof and stain proof products. Some of them being Teflon, some of them used by DuPont. Some of them in Scotchguard. What are the main companies that are responsible for this water contamination that we’re seeing across the country?

Wesley Bowden:               Yeah, well you just named a couple of them, 3M and DuPont historically where some of the biggest, not only producers, but also users of these products. 3M started making it and back in the 50s and then they really started selling it and pushing it into various products, some that were their own, 3M Scotchguard for example. And then a large part of what our water’s contaminated with today is through the use of acquiesced film forming foams, and those are really firefighting foams. So 3M started selling PFOS their own patented chemical to the US military back in the 70s, and they used it up until the early two thousands to make these firefighting foams.

They’ve switched, since switched to different chemicals now. But we have a lot of concerns because structurally these chemicals are very similar. So while they’ve done some studies historically on some of these other alternative surfactants or these PFOS chemicals, we know that if, you know, history is any indicator what’s going to happen in the future, as we start looking at these alternatives to PFOA and PFOS, we’re gonna start seeing the same toxicity profile that we saw in the earlier chemicals.

Brigida Santos:                   So what can you tell me about the adverse health effects that are linked to PFOS, PFOA, PFAS, all of these chemicals, are there any studies?

Wesley Bowden:               There are, not all of the chemicals have been studied so far, but there have been some very large scale studies done, particularly for PFOA. PFOA was one of the chemicals used in the manufacturing of Teflon up in, I guess Washington Works, one of DuPont’s facilities in Parkersburg, West Virginia. There they studied the, the blood of about 70,000 residents and they found this chemical was linked to testicular cancer, kidney cancer, and a host of other diseases. So we know that once this chemical gets in the water and people are exposed to it, your body accumulates it. You can’t metabolize it, it stays in you and after a certain period of time, it really starts to cause changes on the molecular level, on the DNA level of people and it’s causing cancer.

So these chemicals all display some toxicity profile. We have a, a deep concern that all of them show the same toxic effects. And as we study more of the chemicals in this class, this general PFOS class, we’re very concerned that we’re going to see some of the same harmful effects across the board, which is alarming because we’re finding these the more and more we look for them in municipal water supplies. We’re finding that a very large percentage, somewhere along the order of 5% to 10%, potentially even more of the water supplies in our country are contaminated with this chemical.

Brigida Santos:                   And, you know, what about the way that it gets into the water supply? Mostly it comes to the discharge of industrial waste. Also the firefighting foam, it can get into the groundwater.

Wesley Bowden:               Yeah, so a number of the different consumer product plants. So people that are making stain resistant carpets, certain glass processes as well as Teflon, they actually, this chemical isn’t used up in the process, but it’s just simply dumped as a byproduct. And then there are some direct discharges of this chemical where it’s suppose to be a part of the final product and that’s firefighting foam. So we see a large scale across the country use of these chemicals and it was largely used because people didn’t know. The manufacturers, the consumers didn’t know.

Brigida Santos:                   Sure. What about regulation? Are there any, you know, maximum contaminant levels that have been set by the federal government, the EPA or on the state level?

Wesley Bowden:               So for the EPA, they have set a guideline right now of about 70 parts per trillion and that’s a very, very small amount. To give you an idea, 70 parts per trillion is about one drop in an Olympic sized swimming pool of this chemical. So if you have one drop in an Olympic size swimming pool volume of water in your water supply that exceeds the lifetime health advisories that the EPA has said. Many, many States are now looking at this on an individual level and, and what we’re seeing is that as more science comes out, these levels are going lower and lower. So right now the EPA is currently doing another evaluation. We’ve heard from acting director, director Anthony Wheeler, that this is going to be something that his administration is gonna be focused on.

We’ll see what happens there. The States are acting much more quickly and much more aggressively recognizing this danger. Many States such as California for example, have dropped their levels from the 70 advisory level, from the EPA down to five and six parts per trillion for PFOA and PFOS respectively. So the more we know, the more States are trying to get this exposure down to a minimum for people. Unfortunately the only way they’re going to be able to do that is to add a filtration to the water supply. It’s a very, very expensive proposition. One that right now is being passed on to the water users, the consumers like us.

Brigida Santos:                   Right. And what about superfund cleanup? Is there anything that 3M or any of these companies, these polluters have to pay for when it comes to the cleanup and the prevention?

Wesley Bowden:               So right now, no. This is not a class of chemicals that’s governed by CERCLA, or the superfund site act, but there are some bills pending in Congress that are looking at it. And, and we don’t have a whole lot of hope right now because industry is very powerful with their lobbying efforts, that these are going to see any sort of changes underneath the current administration. But we’re hopeful that as our government continues to look at this, continues to do studies and, you know, develop our understanding of how bad these chemicals are, that there will be some real regulations, some real standards put in place to protect people.

Brigida Santos:                   And most importantly, let’s talk about people who have been harmed by this. You know, it can cause developmental problems, different types of cancers, immune system harm, thyroid problems, liver problems. What have the plaintiffs that, your potential plaintiffs that you’re talking to, I know you’re in the early stages, what stories have they had about, you know, being exposed to these toxins?

Wesley Bowden:               It’s unfortunate. It’s a very sad story. The vast majority of people we speak with had no idea that there was this chemical in their water. You know, there are always going to be some anecdotal people like the people that worked at DuPont that are, say it’s safe, but it’s the same sort of analogy that you have from back in the 50s when you had tobacco executives smoking on TV saying it’s not harmful. But most people simply do not know that their water is contaminated. They don’t know how to test for it. But we are able to actually find this in their blood. There are some very specific tests that you can do that will look for these chemicals in a person’s blood and see if they’re at elevated levels.

Unfortunately these chemicals, once they’re in your body, they take about two to five years as a half-life to come out of your body. So if you have 10 as a just a normal level in your body, or I’ll strike that. So if you have, for example, 10 parts per billion in your blood now, which we believe is more than sufficient to cause cancer, five years from now, if it’s PFOS, you’ll still have five in your body. Five years after that, a decade from now, you’ll still have two and a half in your body. So this chemical not only persists in the environment for a very long time, but also in people. And that’s really why it’s become such a topic of focus right now with our government, with our medical community.

Brigida Santos:                   And is there anything that individuals can do on the consumer level to protect themselves? I know it’s everywhere. It’s in our food. So, you know, you can’t like filter your food necessarily. What about water at home? If they, are they able to put filters on it themselves?

Wesley Bowden:               So fortunately, many of these chemicals are being phased out now through a stewardship program that has been adopted by 3M and DuPont. They had to be forced to do it from the regulators. So these chemicals in just average consumer products are, are becoming less and less frequent. In terms of at home water filtration, it really takes a very robust filtration system. So it has to be done, in my opinion, at the municipal water supply level.