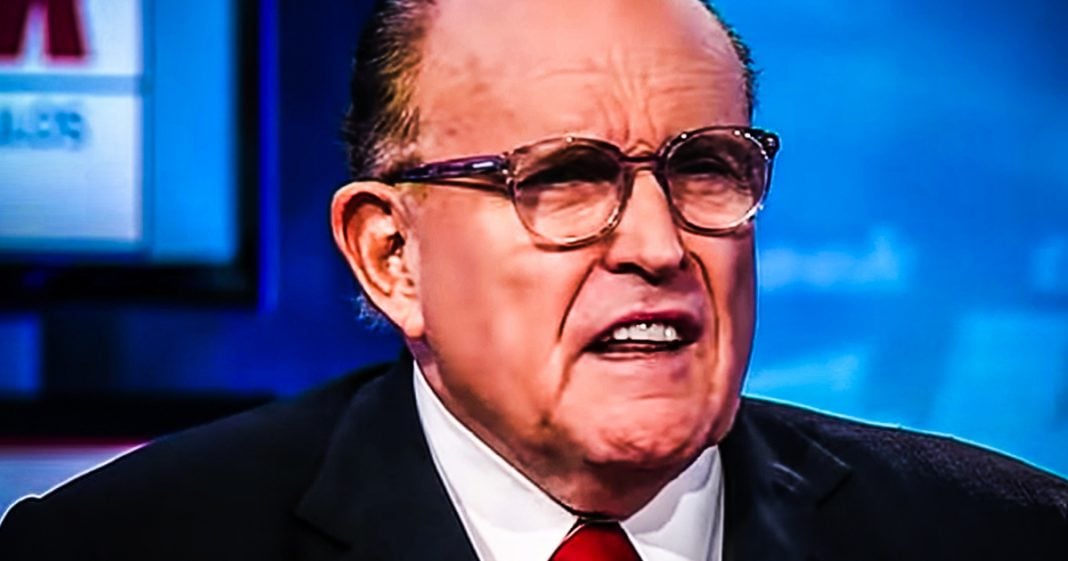 In a new op-ed for The Wall Street Journal, Rudy Giuliani tried to convince the public that Trump was innocent, but instead he actually confirmed that Trump asked Ukraine to dig up dirt on Joe Biden. This man is supposed to be defending the President, yet he consistently manages to confirm that Trump committed a crime whenever he speaks. Ring of Fire’s Farron Cousins discusses this.

*This transcript was generated by a third-party transcription software company, so please excuse any typos.
So Rudy Giuliani decided that he was going to make his defense of Donald Trump in an op ed in the wall street journal. Now the op ed was called the case for the impeachment defense, and Rudy Giuliani wanted to kind of spell out to the public why the whole impeachment hearing is a farce, but instead in triple a typical Giuliani fashion, rather than explaining that the whole thing’s a farce, Giuliani in fact ended up confirming that Trump committed a crime because that’s how incompetent Rudy Giuliani is. And specifically he mentioned it in this line, word for word what Giuliani wrote here. The focus was on Ukrainian corruption, broadly speaking, and out of a five page transcript, Mr. Trump spent only six lines on Joe Biden. But isn’t that the whole thing, Rudy? Like that’s, that’s the part that’s bad. And I know a lot of folks on Twitter were erupting over this saying things like, well, John Wilkes booth only spent six seconds of his whole life killing Abraham Lincoln. So he can’t be that bad of a guy, right? No, no. It doesn’t matter how much time you spend not doing crimes. It’s the time you spend doing the crimes. That’s the bad thing and you just for the second time admitted that it happened. Now, of course, just talking about Joe Biden in the phone call is not necessarily what was illegal. It was the decision to withhold the aid from Ukraine if they didn’t investigate Joe Biden. But here Rudy Giuliani confirms, they did mention Joe Biden and the alleged corruption between him and his son Hunter and the Ukrainian gas company. So maybe Giuliani is also dumb enough or competent enough to go ahead and admit that Trump did withhold the Ukraine military aid except for the fact that he doesn’t actually have to do that because plenty of other people have already confirmed it. So you see where I’m going with this, right? We have the confirmation, and this includes the transcript that Trump himself released, which wasn’t actually a transcript, but a summary of the transcript. Anyway, that confirmed, they talked about Biden. Here’s Giuliani talking in an op. Ed trying to defend Trump, unfortunately implicating him further in it. Then we have all of the testimony saying that the aid was withheld on the basis of you had to investigate Biden. All the pieces of this puzzle are there. Hell, I mean at this point, not only are all the pieces of the puzzle there, we’ve all already put the puzzle together and Giuliani is out there making it so much worse for his client. As I’ve said in the past, Donald Trump absolutely has an air tight against Rudy Giuliani for legal malpractice. I’m not kidding with that. That is how incompetent and damaging Giuliani has been to Donald Trump’s defense, and I do believe Trump should Sue him. I mean, Trump sues everybody for everything. Why not add this guy to the list? Because when you go down for impeachment, whether or not you’re removed from offices irrelevant, you will be impeached by the house of representatives. And once all this ends, I don’t care how good Rudy Giuliani does it defending you in the actual trial part of this. You need this, Sue him just to, at the very least, show the rest of the country that when you get in trouble for the love of God, don’t hire Rudy Giuliani to defend you.