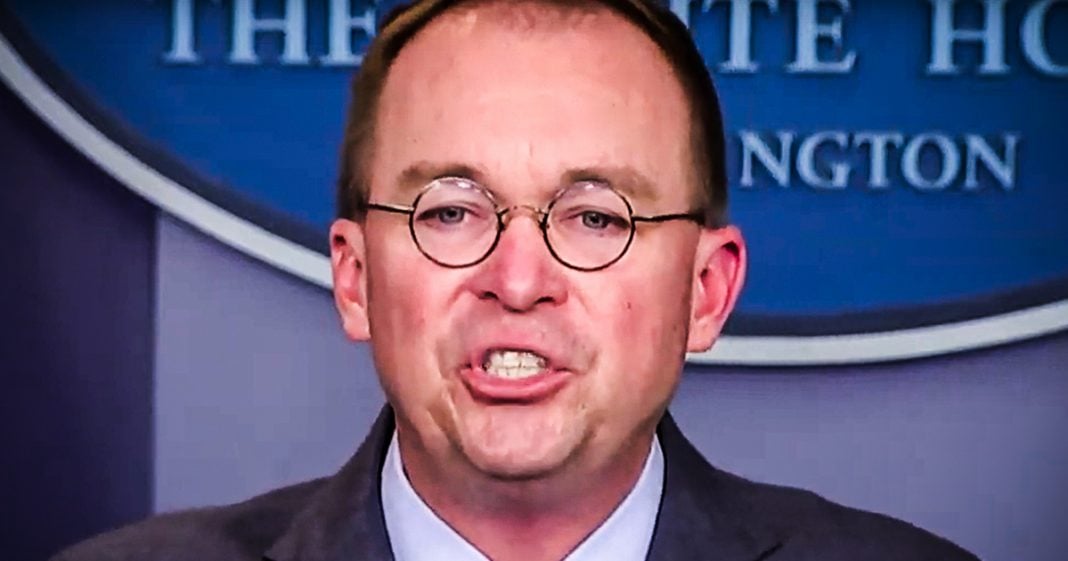 Donald Trump’s acting Chief of Staff Mick Mulvaney has been on the hot seat for several weeks, but he isn’t worried about losing his job. According to reports, Mulvaney says that the President can’t fire him because he “knows too much” about the whole Ukraine phone call and could possibly take down this presidency. Mulvaney has also gone back and forth about testifying before Congress, and Ring of Fire’s Farron Cousins explains why Mulvaney will likely flip on the President.

*This transcript was generated by a third-party transcription software company, so please excuse any typos.
Ever since Mick Mulvaney is disastrous impromptu press conference a couple of weeks ago where he accidentally admitted that a quid pro quo existed between Donald Trump and the president of the Ukraine. Uh, he’s been on thin ice, right? There’s been lots of speculation that Donald Trump would fire him. There’s been rumors that Trump would fire Mulvaney and replace him with Kellyanne Conway. But in spite of all of that, Mick Mulvaney hasn’t flinched. He hasn’t budged and he hasn’t resigned. And there’s a reason why he hasn’t, according to a new report by the New York times. The reason Mulvaney is not afraid for his job and doesn’t think for a second that he’s going to be fired is because he quote knows too much. And he knows that Donald Trump won’t set him loose because of all of the things that he knows specifically according to Mulvaney, what he said to his aides, specifically involving the entire Ukraine scandal. Mulvaney is bragging that he knows too much for Trump to fire him, so he’s not worried about his job. Now, this brings a lot of things forward, right? Because Mulvaney as I mentioned earlier in that press conference admitted there was a quid pro quo and then he had to backtrack off that he came forward later and said, oops, no, I didn’t mean to say he did the crimes. I meant to say he didn’t do the crimes, but now he’s saying, yeah, I know too much. I know everything about what happened with the Ukraine, so we should take him at face value for his first statement because that wasn’t prepared. That wasn’t rehearsed. That was him going off the cuff and accidentally admitting a truth. Then later after he had been coached, after they got together and tried to figure out how to handle this, he backtracked on that statement. Mulvaney was right the first time and his little bragging recently shows it. He does know too much. He knows everything and that’s one of the main reasons why house Democrats want to get him in front of the committees and have him testify. Now, here’s the thing. Mulvaney has already gone back and forth and I know we’ve got the public hearing starting today, but Mulvaney has gone back and forth about whether or not he is going to testify whether or not he was going to sue and not have to testify. He’s now decided that he’s not, but he announced yesterday that he’s going to do whatever the Trump administration says he can or cannot do. So if they say you can’t testify, then he’s not going to testify. So he doesn’t know exactly where he stands on any of this. But here’s one thing that Mulvaney needs to think about. He, unlike so many other people in this administration, could still have a career after he leaves the white house. I know. It’s a scary thought, but it’s true. I mean, let’s be honest, Steven Miller’s not going anywhere. Kellyanne Conway is not getting another job with another administration. Neither is Betsy Devoss or Ben Carson or Steven Mnuchin. Mulvaney could Mulvaney could go back to his home state and run for his old seat again and likely win it. His career’s not finished, but it will be if he goes down with the Trump sinking ship. So mr Mulvaney, as horrible as you are as a politician, and I would love nothing more than to see your career go down in flames. You also have to think about the fact that your career is not at that point yet, and you can prevent it from doing that, but that’s gonna require you to flip on your boss.