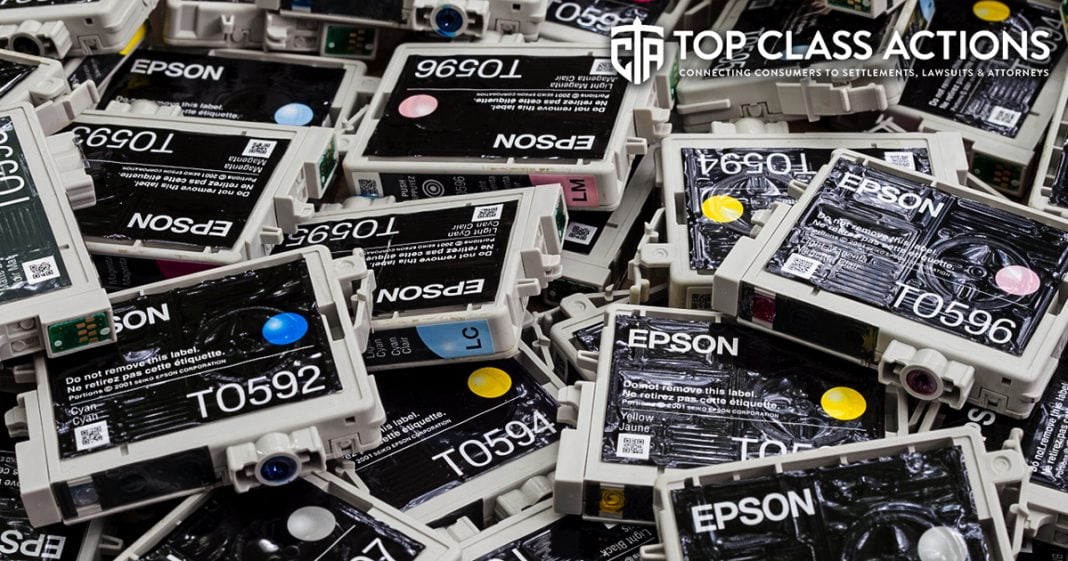 A class action lawsuit alleges that Epson wrongly prevents their printers from working with ink made by any other manufacturer. Allegedly, Epson engages in a “systematic campaign” of disabling Epson printers when the user attempts to use non-Epson ink cartridges. The plaintiffs say that the company does this by designing software updates that purposely disables the printers when the non-Epson ink cartridges are installed. Ring of Fire’s Farron Cousins discusses this with Scott Hardy, the President of Top Class Actions.

Farron Cousins:                  One of the most obnoxious things about owning a printer is having to buy the ink. For some reason printer ink is absolutely one of the most expensive accessories that you are forced to repeatedly buy for any piece of electronic equipment that you have. And now according to a new class action lawsuit, the Epson printer company has allegedly made it to where if you try to put maybe some cheaper ink, some non Epson brand ink in their printer, it disables the printer entirely.

Joining me now to talk about this class action is Scott Hardy with topclassactions.com and Scott this is infuriating. I, I don’t have an Epson printer at the house but the printer I do use, we do not buy the name brand ink because it is, you know, it’s 50 plus dollars for a single cartridge and so Epson thinks maybe they found a way around it by just creating a printer that just shuts down entirely if you try to put in this cheaper ink.

Scott Hardy:                          Right, exactly, because in this case we’re talking about ink cartridges. And so you can go ahead and buy the Epson name brand ink cartridge and it will work. But as you mentioned, this can be a tremendous mark up. The printer companies depend on these ink refills to make a lot of their, of their profit. So in this case, if you use a non Epson ink cartridge, your printer could stop working and you’d have major problems until you call them and they go yeah, uh, you can’t do that even though it’s your printer. It should be your decision. And this has been a common tactic that printer manufacturers have used for years.

When you had your laser printer, you know, you tried to get that, that toner refilled, maybe used to remanufactured toner. Oh well guess what? You may very well have problems using it. And of course they got hit with class actions back then. But, you know, same case here. You’ve got the Epson printer, you try to use these, save some bucks, you’re going to pay for it. Now, I’d like to know that I have an Epson printer that I used even to print out these handy dandy papers here and I have their tank, their eco tank model.

And those, even though I did use the Epson ink, it’s, you could in theory use a, a less expensive. So Epson doesn’t do this across all of their printers, but in this case they did get hit for not allowing and actually disabling their printer. And they’re, they’re doing it under the guise of providing good customer service because they don’t want you to use a substandard part.

Farron Cousins:                  Well, it’s really interesting too because here at the office we used to have, up till a couple of years ago, was nothing but Epson printers. And they were, you know, the, the big giant ones, you had to have the, the cartridge that was about this big with the toner in it. And so, yes, they, they ordered all the generic ones because it would save, you know, $30 or $40 per cartridge. But eventually we phased those out. I forget who we’re with now. I think it’s Lexmark. But anyway, the generic one saves people a ton of money. It saves the consumer, you know, average, this is my home printer. It can save you maybe $10, $15 or $20 per cartridge at your house.

But for businesses now, that’s where the big bucks come in because those big giant, you know, toner cartridges are crazy expensive. So if you have to purchase a hundred of them, but you can save $40 per by going with the generic version, that’s a lot of money. One that Epson doesn’t get because you’re not buying their name brand cartridges, but two, it’s a lot of money that companies get to save by going to generic. So this is a business issue. This is a consumer issue and this could potentially be a lot of money lost by these printer companies when you buy the non name brand printer ink or toner.

So yeah, they, they could be losing a lot of money on this and this would help explain why they’re saying no, you know, you’ve got to have our cartridge. You know, maybe there’s a chip in there and the printer can recognize that it’s not ours, but that’s still deceitful. It’s, you know, not fair to the consumers or the businesses or whoever’s doing this. I bought this printer, I want to put in whatever ink I want to put in and you’re not letting me have that choice anymore.

Scott Hardy:                          Right. Yeah, and, and so Epson is gonna continue to go ahead and talk about how they’re trying to do it because they’re trying to emphasize the quality of the genuine Epson brand and enhancing customer experience and developing new products with the profits from blocking you out from using non name brand cartridges with your Epson printer. We’ll see how this one actually plays out because as I said, Epson already has their, their eco tank models that allow you to use whatever ink you want because you just take that in and you spray that ink into that tank and, you know, move on to keep on printing.

Thankfully, so far they haven’t made you actually scan something to show that you are using a genuine Epson product. We’ll see if they actually move to that with their Epson eco tanks. That would be an interesting development, and I’m sure you would see another class action filed.

Farron Cousins:                  And, and part of the issue too is that the company, as far as I can tell, maybe you can correct me on this if I’m wrong, but they’re not letting customers know ahead of time when you at the point of purchase that, oh hey, by the way, you can only use our cartridges with this device. That’s another, another facet of this. As far as I know, again, maybe I’m wrong here.

Scott Hardy:                          Right. Correct. That’s, that’s a big, a big issue is that you might expect that you’re going to buy it. You’re going to be, you know, you’re paying top dollar for your Epson printer, but then you’ll be able to save some money by using a generic or remanufactured ink cartridge. But in this case, Nope, you have to, you have to use the Epson cartridges or you will lock up your printer.

Farron Cousins:                  For more information about this issue. Please follow the link in the description of this video. Head over to topclassactions.com and make sure while you’re there, you sign up for their weekly newsletter filled with stories like this and so many others that are vital to American consumers. Scott Hardy with Top Class Actions. Thank you very much for telling us this story today.