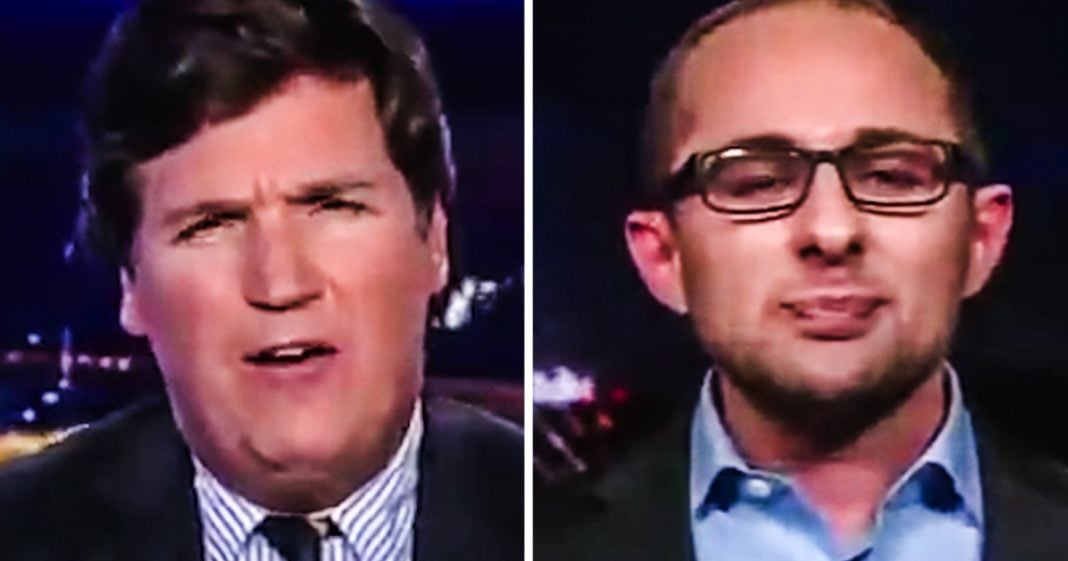 During the Monday night episode of his Fox News program, Tucker Carlson again made the claim that immigrants make America dirtier by claiming that they “spoil” our land. This man isn’t even trying to hide his bigotry anymore, and his words are dangerous for this country. Ring of Fire’s Farron Cousins discusses Carlson’s descent into full blown white nationalism.

*This transcript was generated by a third-party transcription software company, so please excuse any typos.
Last night on his Fox news program, Tucker Carlson, once again doubled down on his claims that immigrants somehow make America a little bit nastier. Here it is,
[and also if you cared about the environment, which I personally do emphatically care and actually go outside once in a while, unlike most people on the left, why would you want a crowded country isn’t a crowding your country. The fastest way to despoil it, to, to pollute it, to make it, you know, a a place you wouldn’t want to live.]
They make it a place you wouldn’t want to live, says Tucker Carlson. So if immigrants come over here to the United States, Tucker Carlson doesn’t want to live here, and I don’t know if I’ve ever heard a better argument in favor of open borders then that right there, send them all over. If it means we get rid of Tucker Carlson, I am 100% okay with that joking aside, let’s drill right down to it. And let’s not mince words either. Tucker Carlson is a racist. Tucker Carlson, Fox news host married to the heiress of the frozen TV dinner. Fortune is a racist. He hates non white people and whoever that bone head from the Heartland Institute he had on there with him, you can watch that full. I think it’s about a minute and a half clip links in the description of the video, but this moron from the Heartland Institute, which is funded by the Kokes and other industry interests, by the way, sitting there spewing all this nonsense about why would we want people to come up here when we’re worried about emissions, they emit things and then they’d be here. Dude, are you really that dumb you? You think that emissions only stay in one place? Like if the United States is polluting all that pollution, just go straight up and then destroy is just our area of the environment and everybody else in the world is fine. There’s no way you’re that dumb. You worked for the Heartland Institute. I’m sorry. You are definitely that dumb, but there is a difference, right? You have this more on from the Heartland Institute on there who’s clearly a dumb human being and being dumb is one thing. You can’t fault the guy for being dumb. He was born that way. But Tucker Carlson, his racism, nah, that’s a learned behavior and he’s been learning a lot of that recently. Has any, so my biggest question at this point is earlier in his broadcasting career, Tucker Carlson was not racist like this but he is today. So was he pretending to not be racist then or is he pretending to be racist now because he thinks it helps him with the Trump base? I wish I had an answer for that, but I am willing to bet that after spending so much time around those folks at Fox news, so much time soaking in those Fox news, Republican talking points, that this isn’t an act. This is who he is. He hosts is a little evening white power hour every day, every weekday on Fox news saying the same kind of garbage, turning people against immigrants. The United States has a lot of problems right now. Most of those problems, believe it or not, folks existed long before Trump came into office. immigrants aren’t one of those problems. They really and truly are not We have a healthcare industry that’s allowing people to die because they can’t afford their medication. We have wall street bankers committing crimes that would get any one of us locked away for the rest of our lives, and yet they get away without ever seeing the inside of a jail cell. We have a federal government that is openly supporting coups in other countries, including the one in Bolivia this past week, and they think that that’s business as usual. So yeah, we got a lot of problems. Immigration isn’t actually one of them, but Tucker Carlson, the racist that he is, would have you believe that the only thing that matters right now is keeping more Brown people from coming across the border.